Switching up sleeping spots is a regular occurrence. 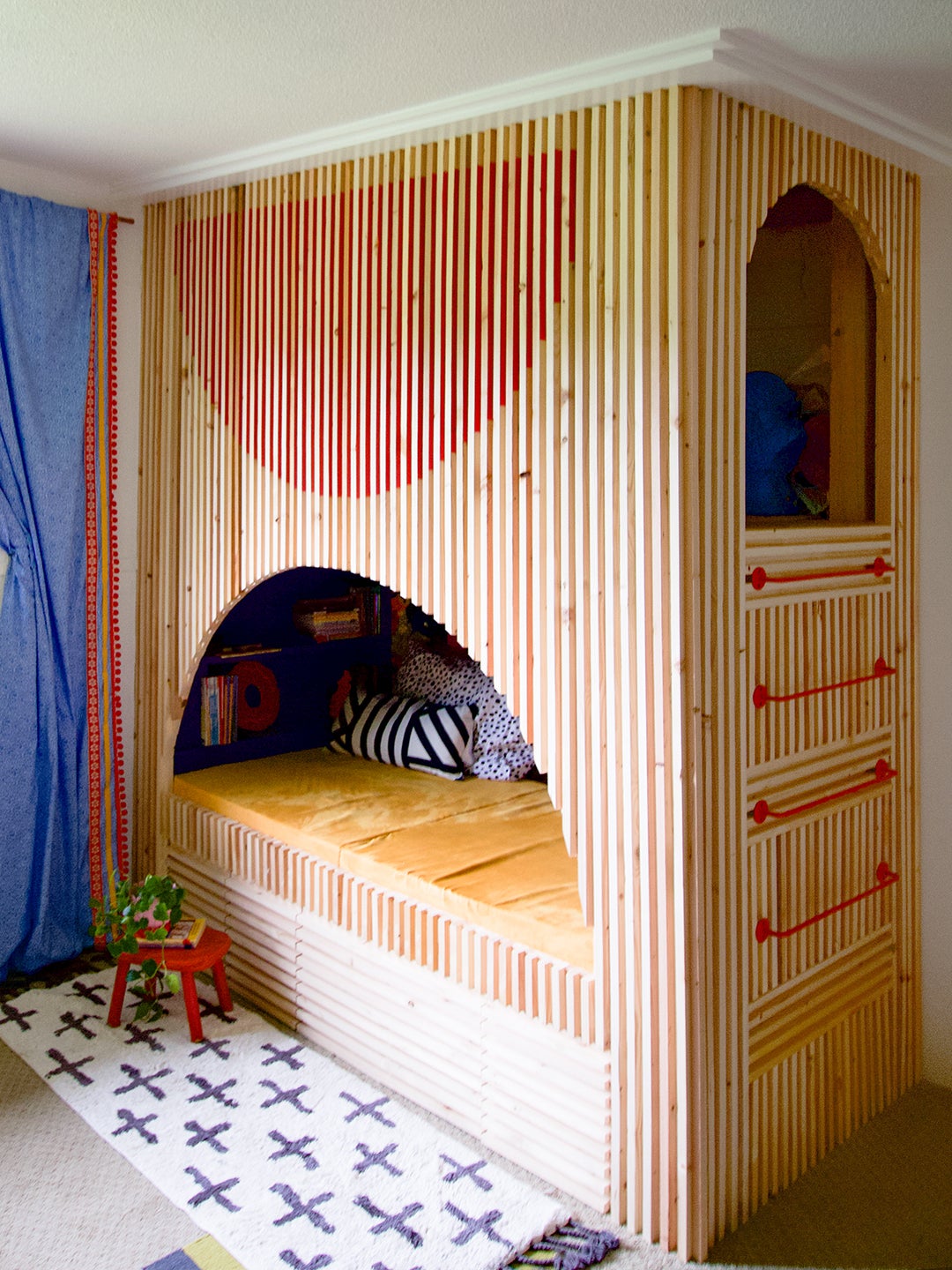 When I was researching my new book, The Bunk Bed Book, I was particularly interested in families who had to use bunks to fit three (or more!) siblings into one room—a task that is always challenging. My hunt led me to the Washington State home of designer and mural artist Racheal Jackson of Banyan Bridges.

When Jackson first put together the room for her kids, Charlie (10), Olive (9), and Benny (5), she opted for a single-over-double bed and built a play loft in another corner to further maximize the square footage—but the space was admittedly short on style. “Somehow their room had evaded all my attempts at sprucing,” she says. In an effort to up the design quotient—and make the spot work even better for her children—Jackson decided to refresh it as part of the semiannual One Room Challenge, giving herself a built-in deadline and accountability to see the project through.

Through her work as a muralist, Jackson knew that paint would go a long way toward changing the look and feel of the space, but that didn’t solve the question of functionality. As she considered the various combinations of beds that might accommodate her trio, she hit upon the idea of installing a Murphy bed. “With three kids sharing a room, the floor real estate is precious,” says Jackson. “[With the Murphy bed], they have a full room to play in.” And since the kids rarely played in the loft or sat at the desks below, Jackson also reconfigured that area as standard bunk beds. In the redesigned space, her kids have a total of four possible sleeping spots—and who snoozes where is flexible. “They’re nomadic,” Jackson jokes. “It’s always a surprise where we find them in the morning.” Here’s how she made the most of their shared room.

When Jackson remodeled the basic 2-by-4–and–plywood loft into two sleeping spots, she embellished it with an arch of 1-by-2 slats. “It’s the perfect marriage of stripes and nature,” says Jackson, a self-described sucker for anything geometric. In my research for the book, I heard over and over that semi-enclosed bunks offer kids comfort, and Jackson agrees. “If my oldest is in a mood and wants some space, he’ll end up there, with pillows creating a wall so he feels like he’s in a cave,” she says. “He also will turn it into his late-night reading den.”

Paint Is the Antidote to a Boring Room

Of course, Jackson put her mural magic to work on one of the room’s walls. First, she installed a grid of wood panels to give her creation some three-dimensional interest, then she painted on arches of graduated color in a primary palette. The lower bunk’s interior got a coat of bold periwinkle paint and an accent wall of floral wallpaper, turning it into the focal point of the room, especially when the Murphy bed is closed. (If you’re also thinking of DIYing something, Jackson gives detailed descriptions of her favorite supplies on her site.)

Replacing the carpeting wasn’t in the cards, so Jackson created the look she preferred by layering colorful and playful area rugs over the top. Because the carpet and rugs are low-pile, the additional floor coverings stay in place without any special pad.

Pick a Color to Pop

The kids’ room spans a full rainbow of hues, but Jackson strategically threaded red throughout as a recurring hit of saturated color. It appears in the light fixture and stool, and as part of the rug, art, and wallpaper. Even the bunk ladder got a cherry makeover (the steps to the top bunk are actually sturdy metal towel bars that Jackson spray-painted and mounted to the bunk frame as steps).

When building out the bunks, Jackson snuck in five drawers underneath the lower bunk and added a headboard bookshelf for extra storage—more is more when you have three little ones. But the big organization win came courtesy of a lucky score on OfferUp. Jackson found a set of vintage modular mahogany dressers for just $150 and used her carpentry skills to build them into the space adjacent to the Murphy bed cabinet. Now her kids have ample space for their (hopefully neatly folded) clothes.