Hidden Refrigerators Are Cool, But This Kitchen Outlet Camouflage Is Cooler

Nothing needs to come between you and your tile. 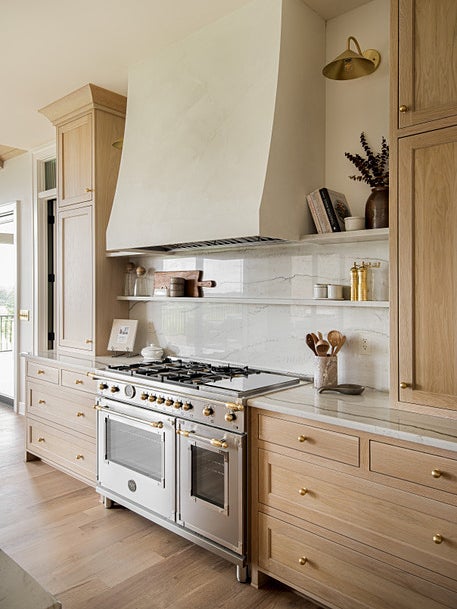 Type “#Backsplash” into the search bar of Instagram and you’ll be taken to a page with approximately 555,550 related posts. As you scroll through, it won’t take you long to realize that this is no longer just an expanse of material that is meant to prevent water and grease from damaging the wall behind it. In plenty of kitchens these days, the backsplash, be it zellige tile or a slab of Calcatta Viola marble, is the design moment that makes the room. That said, there is one thing that often stands in the way of a backsplash being good and it being great: a clunky white outlet.

“Outlet locations are driven by two things: code and functionality,” says Joe Christensen, co-owner of Cardinal Crest, a design-build firm based in the Kansas City metro area. Kitchens involve a lot of power not only for major appliances, which require their own outlets and circuits, but for the stand mixer and coffee maker that’ll likely live on your countertop or the trove of phones you’ll charge at the island. The prevalence of water and other liquids in this space also means it has to meet special requirements, like having a GFCI (ground-fault circuit interrupter) to protect you from electrocution. “You have to satisfy those two needs. After that, design leads the charge,” Christensen adds.

Not all kitchen outlets can be discreetly hidden behind a cabinet door or an under-cabinet power strip. For the ones that need to be installed where you’re planning a beautiful statement backsplash, consider splurging on a flush-mount version. “You can use any flush outlet and then have it faux finished to match the tile or slab,” suggests Houston-based interior designer Marie Flanigan, who has frequently used options from Trufig, a company known for offering outlets that can be custom painted to match your stone, tile, or wallpaper. She is also a fan of Bocci’s 22 System, which can be mudded into drywall or plaster or set flush with millwork, glass, stone, tile, concrete—you get the idea.

Christensen used a solution from Trufig on a recent project for which the brand created a plate to match his Luce di Luna quartzite backsplash. And while camouflaging the outlet wasn’t as expensive as the fancy slab of stone itself, it is an investment. Flanigan estimates it typically costs $300 to $500 per outlet. “So choose your location wisely!” she warns. “I would consider hiding any outlets that truly take away from the overall design.”

Speaking of location, location, location, we asked Hers Electric founder and Matriarchy Build pro Ayrica Walker to give us the lowdown on where to use these outlets, and also what to know before you have them installed. First off, one of the reasons it’s more expensive to have an integrated outlet installed is all the extra drywalling it takes to put in the backerboard that goes around the outlet box. Second, steer clear of using a flush mount that close to the sink.

“Just because that’s where I usually start the circuit for a kitchen, and that one needs to be GFCI,” says Walker, adding that you only need one GFCI outlet at the start of the circuit (the other receptacles from there on out don’t have to be). Bocci, for example, does not offer a GFCI outlet, but you can get it up to code by using its TR outlet in conjunction with an independently sourced GFCI remotely installed in the panel.

Going through the extra trouble to speak with your electrician and come up with a solution that works for your space will be worth it in the end, the pros swear. Hidden refrigerator who? This is the ultimate power move.