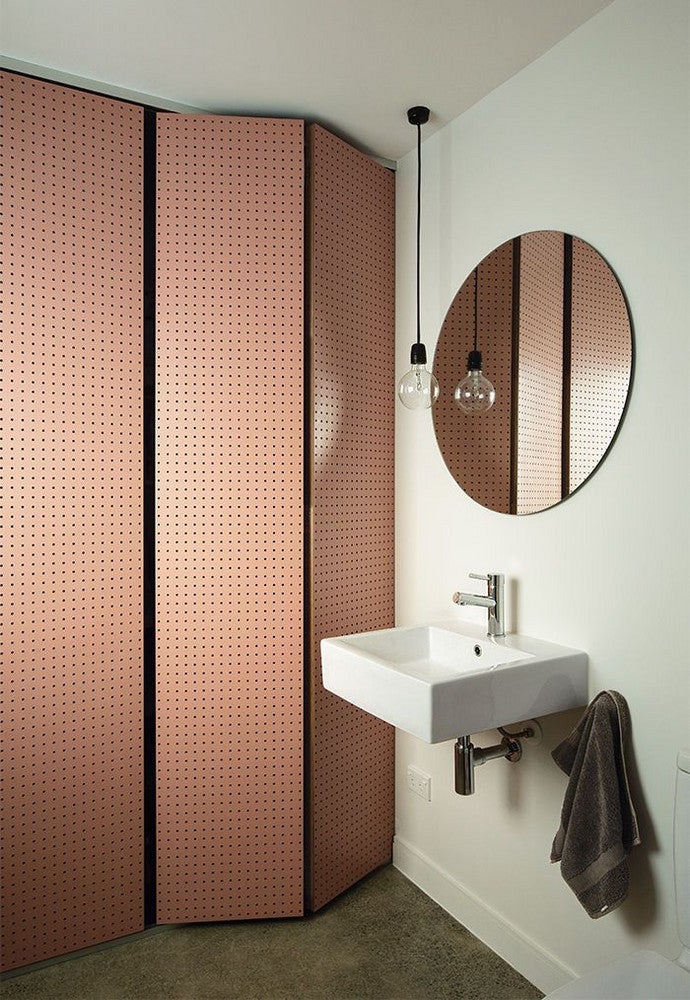 The “Nothing’s Off Limits” Half Wall

This look definitely requires a double take, and a moment to realize just how dedicated one designer is to the half wall look. Clearly nothing is off limits, including the wall art, baseboards, and even the furniture. While the idea is bold, the resulting look is full of possibility, with a geometric vibe and monochromatic tone. It’s fun, cheeky, and totally a DO (if you have the guts to pull it off).

Salmon Pegboard in the Bathroom

So, without a visual reference, the description alone is probably enough to scare you away — until you see how amazing the finished look actually is. Who knew utility pegboard had so much design potential? When affordable meets chic meets practical, we call it a win-win-win.

With a world full of accent walls, half painted walls, and painted ceilings, you probably thought you’d seen everything in the way of “adding just a pop of color.” Then you stumbled across this room, and HELLO genius new idea! Admittedly, this look will require some serious skills with a roll of painter’s tape, but it’s clear that the end result will be well worth it.

This St. Petersburg loft takes asymmetry to the next level with geometric cabinets that confound the eye with a fun mishmash of shapes. Set against a herringbone tiled floor in a rainbow of blue hues, and you have a space that’s modern with edge and attitude.

This bathroom is an intriguing combination of styles and colors. While modern at first glance, there are several elements, like the vintage wall art and pastel blue cabinetry, that leave you scratching your head about the true style of this space. Whatever it’s called, we’re fans, and in love with that blushing pink sink!

Look closely and you’ll see that this clever runner is actually painted on, making this a no-slip, low maintenance way to add character to a staircase. The graphic, modern feel is an added design bonus.

It’s hard to know exactly where to start here, except to say that somehow it just WORKS. With so many unexpected elements to take in — like that bold color palette, and a non-traditional cabinet system — it’s difficult to pin down exactly how to classify this unique kitchen’s style. But one thing is for sure: it’s lovely and a definitely bold kitchen DO.

has much more character when it DOESN’T involve a level. We’re loving how this system seems to blend an entire [%601%] of frames into a single piece of art.

At first glance this may appear to be just another chic bar cabinet, but a closer look proves this to be pure repurposed genius. In this case, a bookshelf has been upcycled into an open bar cabinet that’s as posh as it is functional.

The idea of built in seating normally takes the shape of a banquette, but not in this case. One designer keen on clean lines and space saving functionality cleverly envisioned bench seating that becomes part of the island when not in use. Love!

Mustard, pink, and green may not sound like a winning combo right off, but when done in large blocks as in this modern space, it’s totally an unexpected DO.

Dresser in the Kitchen

No, this homeowner doesn’t store their stand mixer in the bedroom. Instead, they have created the perfect blend of farmhouse and modern design elements in this recently remodeled century-old kitchen to die for.

This clever door upgrade is as simple to achieve as it is affordable. Add this to your weekend DIY to-do list, and impress yourself with a quick and glamorous upgrade that falls directly in the “Why didn’t we think of that?” category.