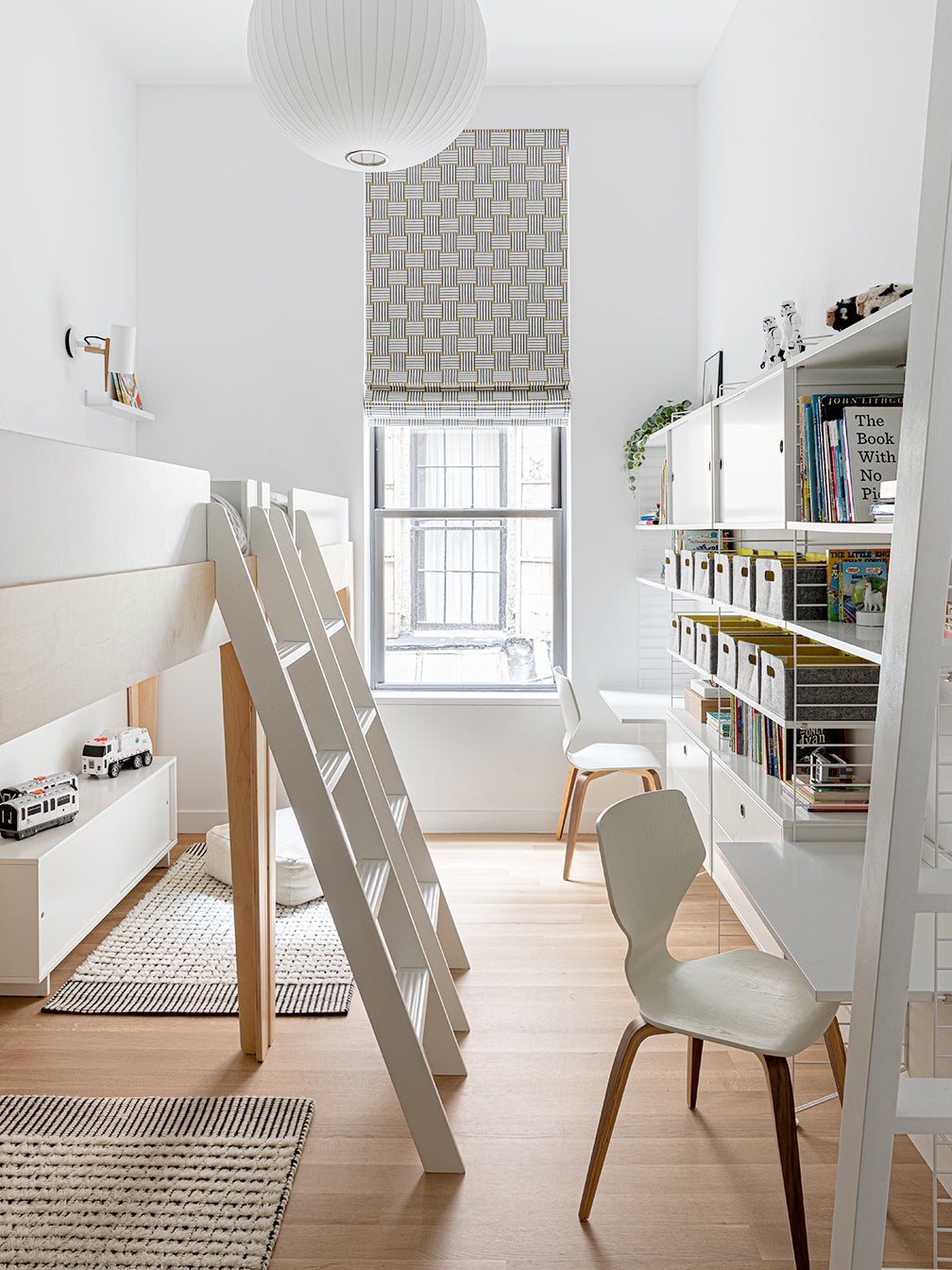 For Teresa and Sean Connor, giving up the main bedroom in their 1,500-square-foot apartment in New York City’s Tribeca neighborhood to make room for their two growing sons, Niko (7) and Roko (5), was a no-brainer. When they first bought the converted loft in 2015, it had builder-grade finishes and an awkward use of space: The couple’s bedroom, closet, and bathroom were disjointed and divided by an unnecessarily long hallway—and their sons’ shared room was smack in the middle of it all. It was hardly the family-friendly home they dreamed of.

Still, the Connors made do for a few years before calling on architect Bryan Natinsky and designer Alexii Friedman for help. “The weird layout just wasn’t conducive to the way they wanted to live,” says Friedman. After playing Tetris with the floor plan, Natinsky came up with solutions that gave the family everything they wished for and more.

Swapping the two bedrooms by blocking off a section of the hallway and moving the dividing wall between them carved out a retreat for the parents (it also meant they could connect it to the larger bathroom, creating an en suite with walk-through dressing area), but it left the smaller room without access to the hallway. The solve: turning an adjacent closet into a Narnia-worthy walk-through wardrobe that leads to the kids’ room.

“We saved a few inches by not having doors on the hanging storage,” says Friedman. “And in this type of space, every inch counts.” The other wall is divided into two sections: lower drawers, for clothes, and upper cubbies, which hold everything from dress-up costumes to Legos. To make it easy for the room to evolve with the boys, Friedman and Natinsky made every rod and shelf adjustable. “As they grow older, those shelves will likely become additional clothes storage,” adds the designer.

Use All the Overhead Space

This new closet also unlocked vertical square footage for an equally great feature: a play loft that makes the most of the small footprint’s extra-high ceilings. “I had this idea of an urban treehouse that re-creates the secret hideaways you typically find in larger suburban homes,” explains Natinsky of the former attic storage space, which was closed off to the room before.

For extra comfort (and sleepover fun), Friedman decided the entire floor would be a cushion. “They can bring sleeping bags up there or crawl up to read a book, but they can also play,” she says. Meanwhile Natinsky researched all sorts of materials that would make the area safe, eventually landing on playground netting that he applied from the floor to the ceiling.

Make the Most of Wall Surfaces

In the bedroom itself, Friedman had two main goals: Keep as much of the floor unobstructed as possible and make sure each kid had his own separate zone. She looked at bunks and back-to-back trundles but ultimately landed on matching loft beds, each with its own console underneath. “It gave the kids complete ownership of their area,” she says.

Each brother also got his respective storage on the opposite wall by way of hanging shelving units outfitted with built-in desks. “We were very careful to consider the amount of space that they would have to really get down on the floor and play with their toys and enjoy their bedroom and not feel cramped,” says Friedman. To make the play area extra-cozy, the designer layered in matching rugs underneath and strung fairy lights through the bed slats. “Children’s imaginations are constantly running wild. And that space could be anything to them, so I wanted to create some magical moments,” she adds.