This is the ultimate small-space living solution. 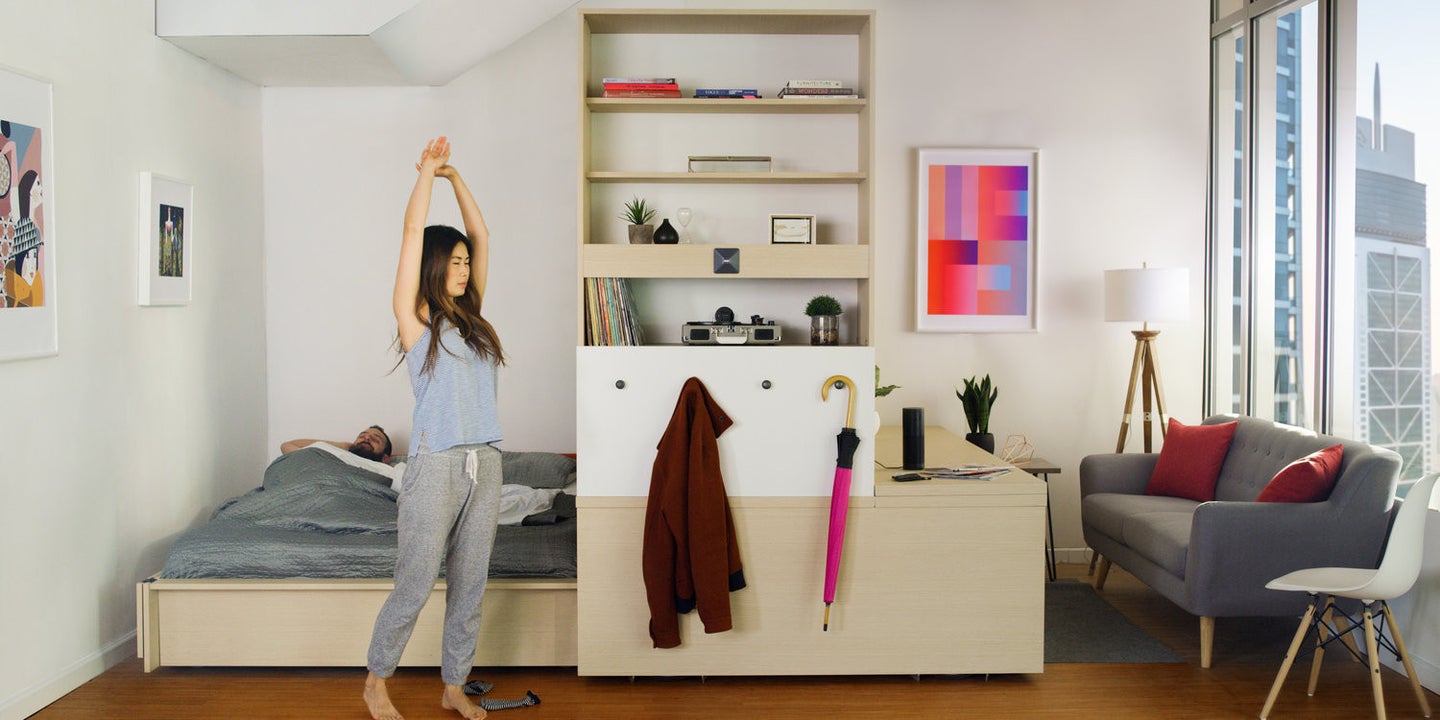 Nothing sounds glamorous about a 200-square-foot living space. In spite of all the great Ikea products that make small space living a little easier, decorating an extremely tiny home can be tricky. However thanks to a new creation from Ori Systems, a startup born from an MIT Media Lab project, outfitting your small space is about to get a lot easier—and tech-savvy. In collaboration with designer Yves Behar from Fuseproject comes a robotic furniture system known simply as “Ori”. This apartment-in-a-box turns into an office space, bedroom, and living room, simply with the push of a button. Initially announced in July 2016, the system comes in two sizes —Full and Queen— and according to Curbed, is officially available to order for developers in the Boston, New York, and Washington, DC metro areas. The rest of us non-developer plebeians will unfortunately have to wait.

According to CEO Hasier Larrea, the Ori furniture model has been tested around the United States in the last year. “This time has given us the opportunity to perfect our Ori Full and Ori Queen models, which will allow people to transform small living spaces with the tap of a finger into spacious bedrooms, comfortable living rooms, beautiful closets, and so much more,” she said in a statement.

Influenced by the growing number of urban micro-apartments and amount of people living in smaller spaces, Larrea and four others initially created a prototype called CityHome that was activated by hand gestures, not a button. The early version morphed into a sleeker, better-designed unit more suited for a living space.

The idea behind the system is kind of genius. What looks like a large storage unit is actually an expandable multipurpose furniture system that ejects office, living, and bedroom furniture depending on your command, ranging from a sliding bed to a full closet to an entertainment center. Bringing the Ori System to life is as simple as plugging it into a standard electrical circuit; plus, it only uses about a tenth of the power used by a hairdryer, so it’s energy efficient as well.

Moving the unit is easy, thanks to a button that when pushed, will slide the unit back against a wall to make more space for the living area. If you’re confused as to what this might look like, Ori created a video to demonstrate the technology.

Despite its impressive futuristic-like tech abilities, developers at Ori have been working on making the unit even smarter. The final product will come with an app, which allows owners to shift the system to a pre-determined setting even when they’re not home, and is Alexa-friendly. Add furniture commanding to the virtual assistant’s already long list of abilities.

Given this robotic prowess, development companies wanting to buy the units for their properties will have to pay a steep price. At $10,000, Ori Systems aren’t exactly the most financially-sound purchases for those of us not living in a small apartment by choice. But given the rising trendiness of tiny homes around the world, don’t be surprised if you start seeing these apartments-in-a-box crop up in luxe homes in the near future.

This story was originally published on June 10, 2017. It has been updated with new information.