Tips on Calming Colors Schemes From a Workout Guru

From studios to nail polishes to workout gear—Taryn Toomey leaves a signature. 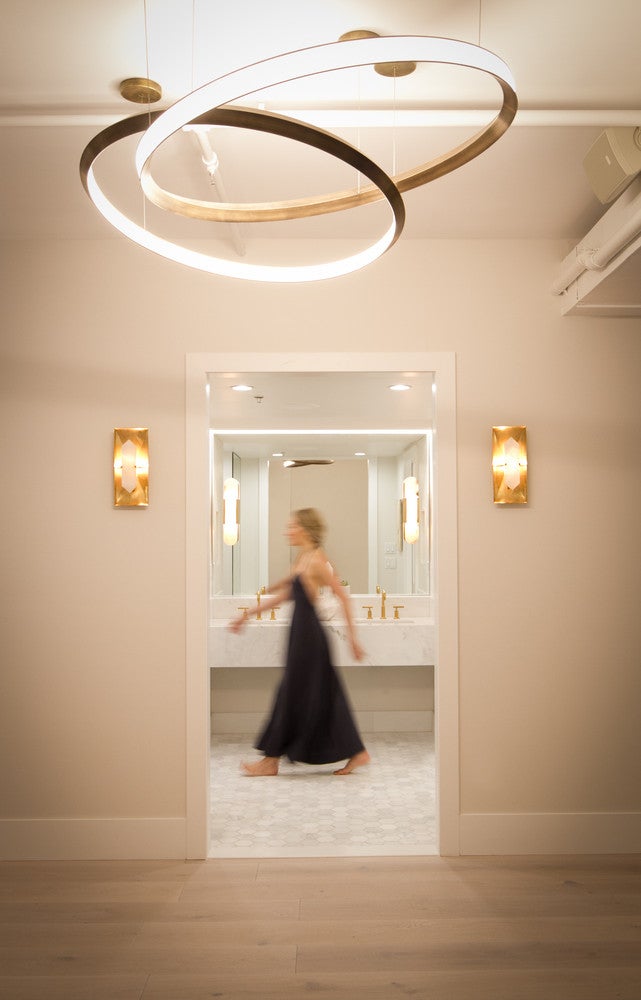 Workout goddess Taryn Toomey has created an empire in the four short years she’s been sharing The Class by Taryn Toomey with the public. It started out in a small space where it was such a grassroots movement that she hesitated even charging participants. But those days are long gone—now Toomey is the workout, with studios in New York, LA, and Vancouver (with summer pop-ups in Nantucket and Hamptons).

And with acclaim comes partnerships, and Toomey has been highly involved in her biggest collaborations—a three color tenoverten collab and an 11-piece special-edition Lululemon collection. Impressively between her studios and partnerships is Toomey’s ability to stamp her signature style and color scheme, making every piece classic ‘Toomey.’ We chatted with Toomey to understand what color means to her, and how she’s mixing up the wellness world.

Color in Her Studio

Visually stunning and untraditional, The Class’s space is filled with marble slabs, crystals, burning candles everywhere, and pink-gray finishes, which is meant to focus on energy balancing and something described by Toomey as “prana,” which roughly describes the Hindu philosophy of cosmic energy.

“I’ve always gravitated to things that make me feel calm, at peace and soothe, and it applies to colors too—colors makes me feel a certain way,” says Toomey. “The practice is filled with so much sound and spirit, (but also peace and meditation) to be able to take in the feeling through the eyes of serenity and peace, it just made sense.”

And that serenity translates to muted, earthy tones at all her studios—from the walls to light fixtures to, yes, even the clothes she wears. (Above we selected a few Toomey-esque colors for inspiration from Farrow & Ball.) And this isn’t accidental, Toomey is very involved in every color swatch selection, preferring colors like light gray, sand, cream, mauve, and moss.

“For example, looking at a mauve, I like it to be caulky, so it’s not so feminine. Shades that are sun-dried earth tones, colors you’d see at a beach.” Colors directly translate to feelings as well. “For me it was so personal, that when you walk in, it could be like a deep energetic exhale when you see it.”

These preferences go beyond color though, with objects that radiate deeper meaning and purposes, like crystals and healing light. The space is completed with “deeply healing clear quartz light fixtures” by Kelly Wearstler and impressive organic geometry lighting fixtures by Christopher Boots.

“Even the floor cleanses and grounds with tourmaline and hematite,” says The Class’ description of the space. Each designer, color, and image in the studios are specifically chosen not only for their visual appeal, but their spiritual one as well. “I definitely gravitate to people that have an intention behind the work they do because they have more mysticism of the world.”

Color in Her Clothes

The special edition Taryn Toomey Collection for Lululemon features seamless crops and bras, knit wraps, and ribbed leotards that allow you to move freely with no distractions. Pieces like the Awakening Tank ($48) in mauve and faint moss green, are described as “loose-cut and airy, this barely there tank feels as light as your heart.”

This collab was years in the making too, says Toomey: “I never go into a partnership that doesn’t feel good or natural. Lululemon supported me since the beginning, when employees attended The Class when it was like prohibition fitness—you had to know my email to get into the class, and it was donation-based payments.”

Prior to this collection, Toomey went to unconventional retailers rather than fitness brands, for her own workout clothes that had the lighter color palette she preferred—Zara, Forever 21, etc.—for “tops and leotards that I could just sweat in.” So when the collection with Lululemon started to solidify, she maintained her color preference of a collection of neutral colors like cement, cream, dusty mauve, and mossy fern.

“Clearly it was filling a void because of how quickly it went off shelves.” (The line sold out in half a day online, and in stores, but is now fully restocked for your purchasing pleasure.)

Color on Her Nails

Nadine Abramcyk, co-founder of tenoverten, and Toomey have been friends for years, and the collaboration, yet again, came naturally. “One day, I said, ‘that mulberry color, I wish it was a touch less saturated,’ and Nadine was like, ‘great, let’s do a collection.’”

As with all things Toomey collaborates on, it has a deeper approach toward health and wellness. “It’s all about clearing toxins and letting go—toxins aren’t just things we put in the body or on the body, but it can also be the things you say to yourself and others, it’s all part of it. So it’s natural that the polishes are eight toxins free.”

A poem by Toomey is part of the collaboration, too, and included on the packaging:

“We are the guides we seek. We are the love we yearn for. Our beauty is here, in our own reflections, if only we would look. Witness. Listen. Let your heart open to the path back to yourself. And there you are. Always.”

In all things Toomey, it reflects back to who she is as part of a bigger practice. “It always goes back to ‘How are you feeling?’ It’s a nod to the work we’re doing in class and life.”

See How This Celebrity Trainer Spends Her Weekends This Is The Chicest Sauna In The World How to DIY a Zen, Spa-Like Bath at Home