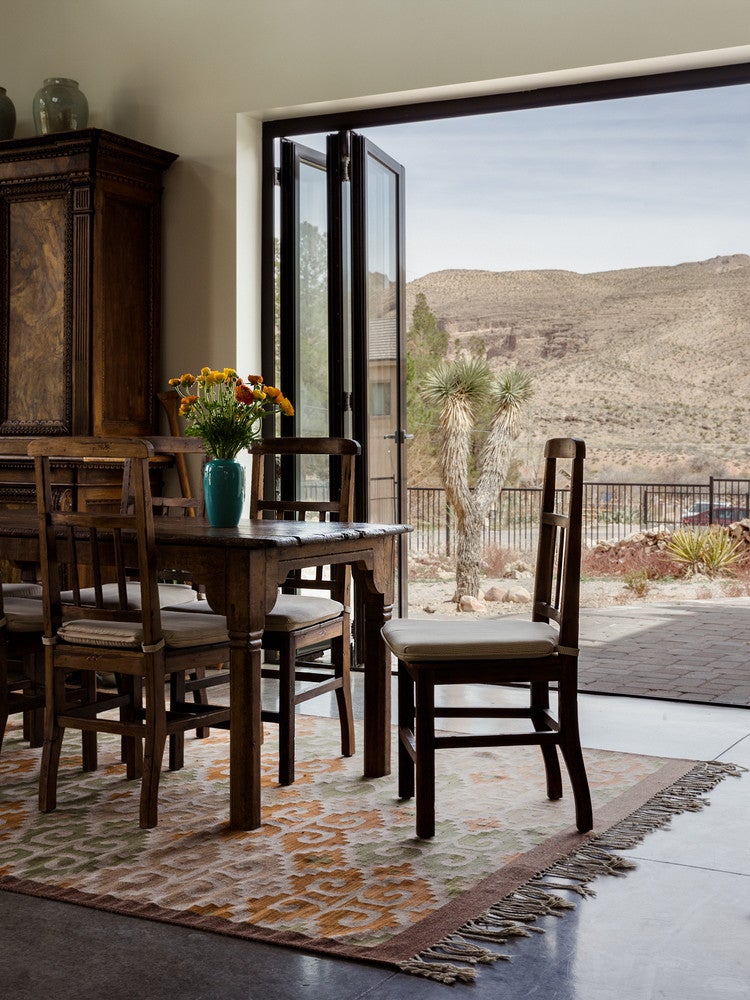 While most siblings would unapologetically cringe at the mere thought of having to work alongside one another on a complicated project like as building a home, this was not the case for Guy Pinjuv. As a forest carbon scientist, Pinjuv has travelled the word over working to reduce deforestation and replant trees to address climate change. So when he decided to move back to his home state of Nevada after living in Portland for 10 years, Pinjuv knew that he wanted his home to be as sustainable as possible. He also knew that there was no one more suited for the job than Dorothy Bengochea—a local veteran designer who also happens to be his sister.

“We are on opposite ends of the family. I’m the oldest, and he’s the youngest so there are 11 years between us,” says Bengochea. “It was definitely very personal. He is such a caring and loving individual that it was really great to work with him and try to give him a home that he truly wanted.”

Situated in the small mining town of Blue Diamond, Nevada, the custom-built home is, in many ways, a conscious reflection of the quiet desert landscape that surrounds it. Aside from sourcing reclaimed materials, installing large sliding doors, and incorporating impressive structural beams, making room for his now-fiancé, Laura Rosmann, was also high on Pinjuv’s priority list.

“Guy and I are now engaged, but we were dating throughout this process, which, I would say, is a really great way to know someone,” says Rosmann.

No strangers to the area (Bengochea and Pinjuv grew up in the nearby Calico Basin area), the all-too-familiar landscape served as a natural jumping off point for the project. “We focused a lot on bringing those views outside in, and bringing the feel of nature into those living spaces,” Bengochea tells Domino. “The finished space was meant to echo that environment.”

“It’s fairly classic; a desert version of a mountain home, which served as much of the inspiration,” explains Rosmann.

By sourcing many of the materials for the home from soon-to-be demolished structures—including hotels, casinos, and private residences—they were able to introduce a local dose of character, while sparing the budget at the same time. “We tried to get as much reclaimed stuff as we could,” explains Pinjuv. “In Las Vegas, if it’s not brand new, they literally blow it up and start again.”

Outside, for instance, the pavers that now make up the patio were obtained from a driveway of a mansion (“the owners thought they looked dirty, but once we had them power washed they looked brand new!” notes Pinjuv), while much of the stonework on the exterior was sourced from a deserted construction pile outside of town.

“Guy wanted everything to feel like it had been there; he wanted this refined, modern, rustic feel,” says Bengochea.

Setting the scene for the rest of the home’s organic, earth-toned color palette, the kitchen is a rich culmination of warm woods, antique charm, and repurposed materials. For the cabinetry, they opted for a glazed maple, while the white oak island was stained in a cool, denim finish. As for the backsplash, that’s no ordinary find.

Of course, every home deserves to have a little fun. Spot that net hanging from the second level? If you guessed hammock, you’d be correct! So how exactly did this daring, indoor addition come about?

“Probably a little too much beer,” jokes Bengochea. “I had seen a similar installation in a much smaller loft area, and when we were talking about that big open space he had up there, I kind of tongue-and-cheek said, ‘Oh, you could do something similar to that.’”

A seasoned climber himself, Pinjuv was in from the very beginning. With the help of local riggers (Blue Diamond is a hotbed for the workers that man the trapeze and circus acts in Las Vegas), Pinjuv was able to safely install the playful piece and ensure it was structurally sound.

“I’ll hang out in there,” says Rosmann. “I’ve tried to sleep in it once, and it’s not my thing. To get into it, you have to climb over the railing, which can be a little daunting for people.”

When Laura is out of town, however, the sky-high cocoon is Pinjuv’s snooze spot of choice. “I get in it pretty commonly,” he notes.“I sleep like a baby!”

Divided into separate slabs to create a large-scale tile effect, the concrete floor is actually the original foundation that was poured for the home. Not only does the surface’s rugged nature lend a refreshing industrial perspective to the home, but the budget-friendly fix also serves as a natural cooling agent for the 2,800-square-foot desert abode.

“Something I learned about Guy throughout this process is his appreciation for things being very authentic,” explains Rosmann. “It doesn’t all have to be natural materials, but it’s like, if you’re going to put up a giant beam, it’s not going to be a fake beam. It’s not going to be pieces of wood that aren’t going to be weight bearing or solely decorative. Function is really important.”

Upstairs in the master bedroom, a lively painting by Seattle-based artist Fran Holt looms over the headboard.

“It was probably the first real, big piece of art I ever bought,” says Rosmann, who purchased the piece when she was still living in Seattle. “We saw it at a restaurant by my old apartment, so it [represents] these places that we spent getting to know each other and falling in love. It’s a bold piece, so that was another good indicator, like, ‘Oh, I think we’re really well suited if we like something that has all of these colors.’”

In a similar manner, the built-in shelving unit in the office space downstairs offers a telling picture of the couple. Littered with colorful artifacts, family heirlooms, and other meaningful knick knacks, here, pieces from Rosmann’s past—like the century-old books passed down from her great aunt—and items collected from Pinjuv’s travels abroad peacefully coexist.

“Those items needed to be displayed properly where not only he could appreciate them, but so everyone else could come in, and he could tell his story,” says Bengochea of the curated display. “It tells a lot about him and the places he’s been and the things he’s done, without ever having to say much.”

For most eco-conscious individuals, building a partially sustainable home might feel like enough. But given his background, Pinjuv wasn’t ready to stop there. Aside from planning a wedding, he’s also set to embark on another exciting adventure this year: Running for Congress in his home state.

“Las Vegas is so unsustainable—it’s hard to put it into words. We’re one of the places that is likely to be hit hardest by climate change. Even people who are doing stuff within the government related to climate change don’t have any idea how pressing or how short the time frames are,” explains Pinjuv, a firm believer that we need more scientists in office to combat climate change. “It’s past time to start taking this seriously. I have no desire to be a politician, personally, but I feel like it’s time to change the conversation or change the direction of things.”