furniture that tells a story (and reclaiming the materials that make it!) 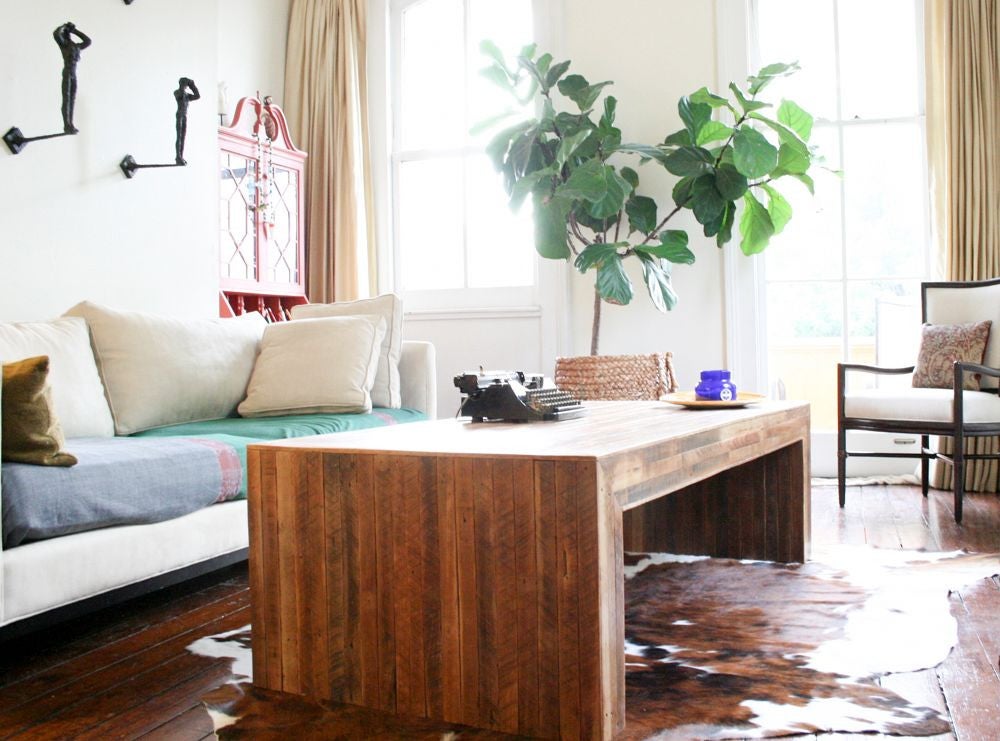 Our most cherished belongings are those that tell a story, or hold a memory, or come along with history of their own. Furniture crafted of reclaimed materials always has something interesting to say. Alex Geriner, Owner and founder of Doorman Designs, shares with us a few tales of tracking down materials for his original furniture designs, giving us a bit of insight into just how much work goes into our favorite reclaimed pieces, with a few fun encounters along the way.

HOW DID YOU COME TO BE IN YOUR CURRENT LINE OF WORK? HOW LONG HAVE YOU BEEN CREATING FURNITURE?  I founded Doorman Designs five years ago after graduating from college in Mississippi and returning to Louisiana and a job in New Orleans. Limited by a dismal post-graduate budget, I desired to furnish my apartment, built in the 1880s, with furniture that was true to the architecture of the house. I wanted it to embody the charm and grit of the Crescent City. So, I decided to start making my own pieces.

My first creation: a headboard crafted from an old growth cypress, five panel door salvaged from a house flooded in Hurricane Katrina. I inlaid the panels with ornate, 19th century ceiling tins to give the piece more character and history.

I started to make and sell more headboards and eventually began designing coffee and dining room tables. Today, my team and I design everything from beds to sideboards, barstools to dresser drawers. The materials I use are often beautiful pieces of reclaimed wood from the Gulf South and historic New Orleans homes.

Growing up on the Gulf Coast, I appreciate how much history can be found in New Orleans’ architectural details. Ten years after Hurricane Katrina, there’s a lot of rebuilding, construction, and new energy in this city and I’d like to think that my furniture is playing a part in keeping the nostalgia, ambiance, and legacy alive.

WHAT INSPIRES YOUR DESIGNS?   Right now, I’m drawing a lot inspiration from two different eras of design – 1950-1960s mid-century modern and French colonial style. While these are two completely different styles, they both seem to agree that more is not necessarily better when it comes to the details of the furniture.

The materials and wood I work with have such a great patina they don’t need a lot of fancy effects to stand out. Today’s modern furniture is very clean lined and scaled back. I love taking slabs of old wood that once belonged to a historic house and turning them into a sleek table, dresser, barstool…you name it! The history of the wood does the talking, and coupled with a modern twist creates a chic look that works well in so many different spaces.

I also like French Renaissance style furniture, but with more of a gritty, bohemian flare mixed with art from different time periods. I appreciate the refined, and sometimes primitive approach but like to incorporate ornate pieces of iron to add a bit of curiosity.

WHAT IS YOUR FAVORITE PART OF THE DESIGN PROCESS?  My favorite has to be the very beginning – the inception of a new piece. I love that “ah ha” light bulb moment! It happens when I’m traveling on new adventures, studying nature’s subtle details, or just zoning out in the shower.

When the light bulb goes off, I immediately make a mental image in my head and try to jot down a rough sketch on paper. I almost always carry a notepad for this exact reason.

It’s always so gratifying as a designer to remember that initial sprout of an idea, and then to see it in 3-D right before your eyes.

WHAT IS THE BEST RECLAIMED FIND YOU’VE EVER COME ACROSS?   Not long ago, I was working with a huge piece of barge board (parts of old barges that brought people downriver to New Orleans in the early 1800s, and once here, were dismantled and used to build new homes) that I salvaged from a small neighborhood corner store. It was covered in layers of beautiful old wallpaper.

As I scraped back each layer, I could see years and years of changing design styles and it was fascinating. The layers ranged from this funky 1960s flower pattern all the way back to the Victorian era of the 1870s. But the coolest part was at the very bottom layer – a chunk of newspaper, typed in German, and dated July of 1851. Roughly 165 years of history staring right back at me!

WHERE ARE SOME OF YOUR GO-TO SPOTS FOR RECLAIMING MATERIALS? I buy from lots of salvage guys, contractors, and even homeowners renovating their houses from around the Gulf South. Typically they call me or I seek them out when I’m looking for something specific. My favorite local guy is a character named Willie White. He is a demolisher with a big heart for historic architecture and a purveyor of meticulously saving each piece of a structure so that it can be reused by someone else. I also like to check out a huge salvage place called Riccas, and the Preservation Salvage Store in the Bywater neighborhood.

WHAT IS ONE COMPONENT OF THE RECLAIMING PROCESS MOST PEOPLE DON’T KNOW ABOUT? It can be a hard medium to work with, or work around I should say. The imperfections that make the wood so appealing can also drive you crazy. Actually, reclaimed wood is like people! No two are alike and each one has its own personality filled with good and bad aspects that have to be worked around. Sometimes the most beautiful pieces are the craziest to work with – they might be filled with rusted nails, have lots of rough patches to sand through, or be bowed and twisted in odd places. That’s a part of life that anyone can relate to.

WHAT IS THE STRANGEST RECLAIMING ENCOUNTER YOU’VE EVER HAD? I don’t know if it’s a strange encounter, but certainly the most exciting was the discovery of the wood for my current dining room table. It was December 2015, on a cold, foggy morning and I was on a family vacation. Each year, we rent a cabin in the woods of North Florida above a little coastal town called Apalachicola. We were driving down a country highway and came upon a man selling cypress tree stumps in his front yard. We had to stop, and two hours later pulled away with a truckload of centuries’ old cypress and one particularly large stump weighing almost 500 lbs!

He took us on a hike of sorts, down through the swampy riverbeds below his house where he excavates sinker cypress. This name is given to cypress logs that are preserved under water for decades or even centuries. It often happens when trees, surrounded by water, die or are blown over in a storm. The cypress won’t rot under water and this man’s job was to treasure hunt, in the cloudy muddy waters, looking for nature’s preserved artifacts.

WHAT IS YOUR PERSONAL FAVORITE FURNITURE ITEM YOU’VE EVER MADE FOR A CLIENT? My favorite individual piece might be a coffee table I made from our Miro Collection. It’s a complex design that incorporates beautiful reclaimed Louisiana cypress configured with sleek angles and an antiqued mirrored top that we make by hand. Each one is different and I love the blend of old wood with a unique form, topped off with the aged mirror.

WHAT IS THE BEST REACTION YOU’VE EVER SEEN TO YOUR WORK?  My team and I just finished up a great project for the new

where we built and installed 23 custom canopy beds. It’s a boutique hotel in a really historic mansion in the Garden District. The family that runs it and their designer, Lauren Mabry, walked into the rooms on installation day and nearly cried. After so much hard work and long hours, it was an overwhelming, yet proud moment to see it all finally come together.

Last year, we were commissioned to build a memorial bookshelf for an Iraq War veteran who died from complications with PTSD. He volunteered to rebuild New Orleans homes after Hurricane Katrina in 2005 and had a love for the city. The bookshelf is now housed in his college library as a community piece. It was dedicated to him in an emotional ceremony that marked his legacy as a person and the philanthropy work he did after Katrina. I was incredibly honored to be involved in this project.