Succession and the Curse of Cold, Sterile Interiors

What the show’s set designs really tell us about the Roys. 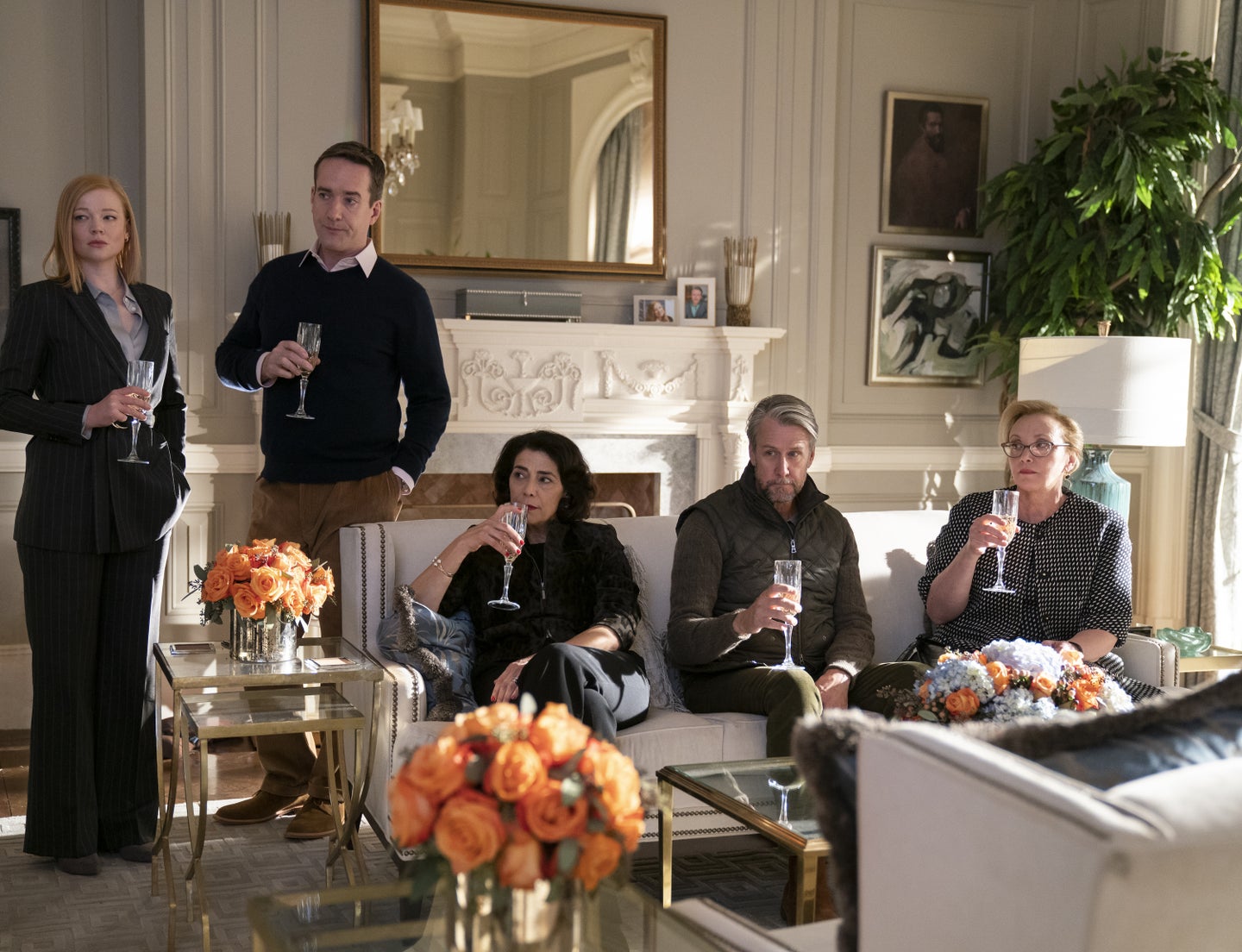 In the season two finale of Succession, we joined the Roy family on their humble yacht: a multimillion-dollar vessel that boasts a pool, a gym, umpteen bedrooms, and a water slide (among other things). Its spotless deck inspires the impromptu slogan “sails out, nails out.” Translation: Please leave your shoes at the door, lest you leave your mark.

Succession’s story lines, dialogue, and Jeremy Strong’s ability to convey emotion using only his shoulders have combined forces to make the show a critical smash hit. It’s also particularly adept at using design as a means of storytelling, which has become more and more apparent in season two. It takes a lot of vulnerability to treat your space like something that authentically represents you—and since most of the series’s characters have long suppressed their ability to be vulnerable (or even warm), the complete lack of personality or uniqueness in their homes speaks volumes.

Especially Shiv and Tom’s: When we meet Shiv, she doesn’t work for Waystar/Royco but is rather working in politics, representing candidates who are far from the right wing talking heads her dad champions. She lives in an apartment that’s refined but also lived-in. Shiv and Tom have conversations over fruit and granola in their breakfast nook. There are books on shelves and dishes on the counter. They chat in the bedroom while getting ready for a charity ball, her makeup stand only an arm’s throw from the bed, the light warm and cozy. But that eventually changes. Following their wedding and Shiv’s choice to enter the family business, she and Tom find themselves in an upgrade. Their apartment sits above the city and delivers a beautiful view. It’s spacious and minimal.

This reflects an increase in emotional space between the couple. Over the course of season two, Tom’s disappointment in his marriage seems more and more obvious, and their dynamic becomes increasingly cold. And so is their interior design: white and stark and painfully chic. Unlike their first home, there’s such little decor Tom actually suggests they commission a portrait of the two of them. There aren’t any curtains or blinds, and the apartment is ironic in its purity. Stripped of all personality, it feels like a blank slate for two characters whose hands get increasingly dirty. It’s a model home for a false sense of happiness.

After all, that’s the precedent set by Logan and the former Mrs. Roy, Lady Caroline Collingwood. Both of their homes are shocking in their differences (Logan’s cream colored and soft with fresh flowers—but only because it’s the way Marcia’s decorated it; Lady Caroline’s a former castle her children weren’t allowed to touch anything in). But they both embody a coldness and sterility that makes each feel foreboding. And for good reason: Logan’s home is ground zero for confrontations and emotional blackmail, and so is Lady Caroline’s. (Lest we forget that the first question Lady Caroline asked guests upon their arrival to Shiv and Tom’s wedding is whether they think the marriage will last.) Both parents live in flat, heartless places, even when populated with people they’re supposed to love. (Of course their children are all broken!)

Not to say there aren’t attempts to break from the family mold: Logan’s brother Ewan lives in an old farmhouse in Quebec. Connor’s ranch is sprawling and so familial that he hosts the Roy family therapy session in season one—only to jettison it for a rented hotel apartment after deciding to run for office and cozying up to the idea of being associated with his money-obsessed family. (Particularly since you need money to run for president.) And then there’s Greg: The boy who once threw up out of the eyes of an amusement park mascot evolves from a bumbling fool to the Machiavellian poster boy, going from sleeping anywhere he can to living in an expansive loft paid for by Kendall with nothing but the bare necessities. (As if reflecting exactly how mysterious Greg and his intentions actually are. Like, who is he?)

It’s fitting that the final episode of a season that’s been defined by betrayal takes place on a boat, a setting that forces familial closeness. And arguably, it’s even more fitting that the only touches of warmth on the yacht come from Marcia’s recent aesthetic contributions. At the top of the episode, Shiv comments that the colorful string of lights that greets guests is the decorative effort of her now former stepmother. After all, Marcia is a person who isn’t afraid to show her true emotions: She’s a woman who seemed to genuinely love Logan, and then dared to leave him after he broke promises to her.

It takes guts to wear one’s emotions on one’s sleeve—and on one’s walls. To be vulnerable enough to display your taste means to take a risk, and none of the risks that characters on Succession take rely on their authenticity. Personal space is supposed to be where you can unabashedly be you—but few of the Roys know who they are. The more powerful they get, the more personality drains from where they live. Why? Because it’s easier to clean up what’s already sterile in the wake of a disaster. Even if it means forfeiting the personality you have.

See inspiring homes: In a Color Scientist’s Portland Home, Every Bright Hue Has a Backstory All the Best Things in This Photographer’s Home Came From Her Childhood Attic This Artist’s Home Is as Cool and Collected as Her Work