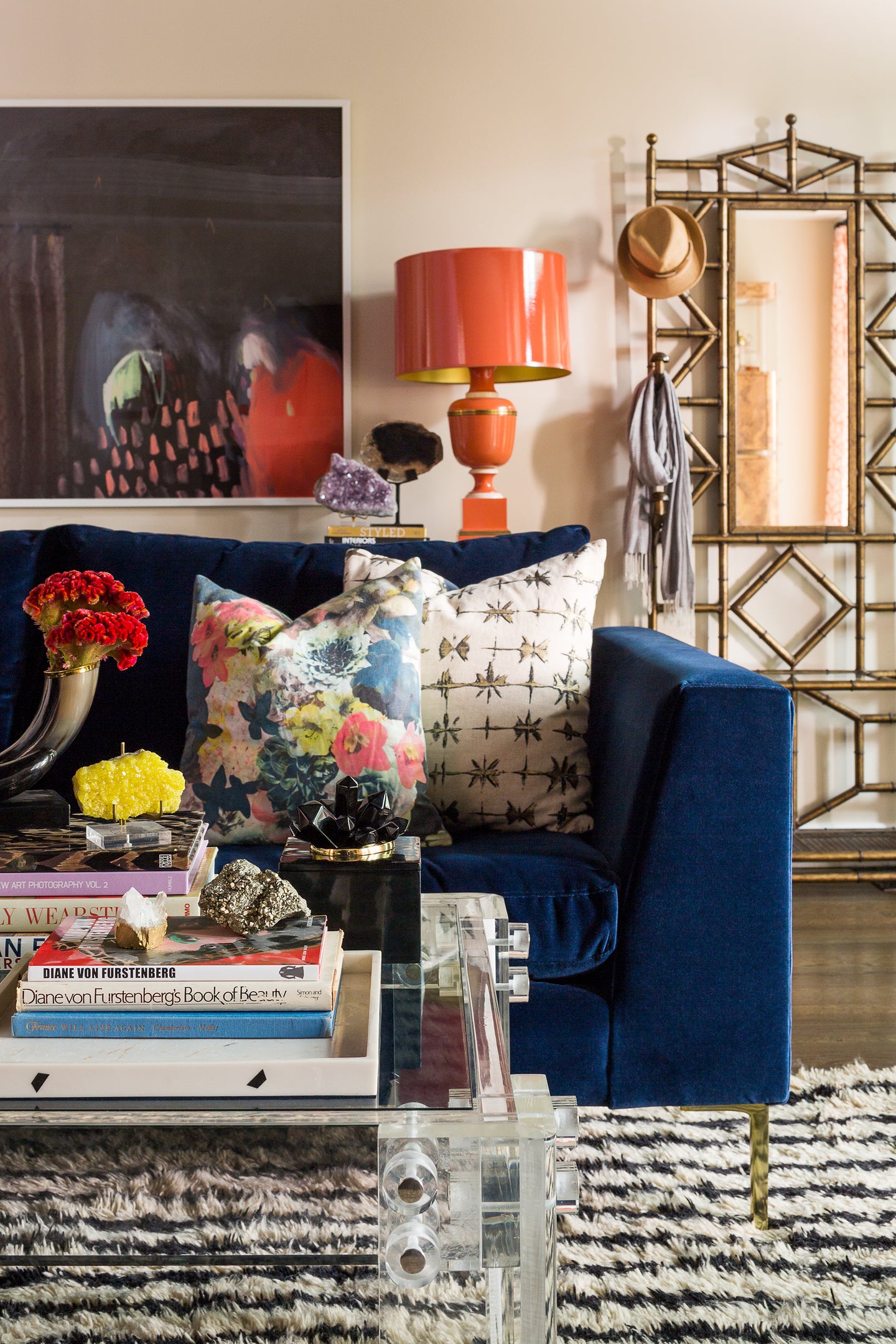 When it comes to blending the old with the new, it’s all about establishing an artful balance. For interior designer Lauren Svenstrup, of Studio Sven, this posed the biggest challenge in her latest redesign, as she sought to seamlessly integrate her client’s extensive collection of vintage pieces and unique treasures into a new home. What may seem like a relatively simple concept, in theory, she found to be easier said than done.

The primary goal of the project was to transform the space into a lively and colorful oasis, fit for a growing family. “It was important to both of us that we incorporated her extensive collection of vintage pieces into the design,” says Svenstrup, “specifically burl wood, lucite and rocks, lots of rocks.”

A look throughout and you’ll easily notice the abundance of color and pattern. Each room of the home has a distinct personality, led by rich textural layers and eye-catching moments, often of a lustrous, metallic finish. “The original design had even more pattern than the end result,” notes Svenstrup. “The homeowner wanted vibrant, but since the home was freshly painted, we didn’t want to allocate too much of our budget to repainting.”

Instead, Svenstrup opted to paint just the ceilings and brought in a diverse array of patterns to offset the otherwise neutral walls. Patterned window treatments became yet another method for the designer to instill an added dose of interest to the home. “I found these fabulous (and affordable!) ready-made panels at Anthropologie, and they were perfect,” she notes. “Once I realized that the homeowner wasn’t remotely intimidated by color and pattern, I ran with it.”

Pops of color in unexpected places instantly became a prominent theme within the home. In the nursery, the vaulted ceilings were paired with bright coral paint, gold vinyl dots trickled down the wall behind the crib, and an overdyed turquoise rug rounded out the whimsical scene.

The dining area—which is part of the home’s open-layout kitchen—quickly became yet another meeting place for pattern and color. Since the family didn’t necessitate a formal dining room, Svenstrup transformed it into a play area for the kids and carved out an eating spot directly in front. “I had a custom banquette made so they could still enjoy a large eating area, but it wasn’t taking up as much real estate,” Svenstrup recalls. The designer reupholstered the dining chairs in an eye-catching ming-dragon print and paired it with a Chinoiserie hutch—sourced from Craigslist, no less—to give the dining zone a burst of character.

“Even though it’s an open room, I wanted it to feel like two separate spaces, should they want to host a dinner party or want a nice, quiet meal after the kids went to sleep.”

For the playroom, Svenstrup brought in a colorful slew of FLOR carpet tiles to complement the surrounding palette. The tiled rug fades to black as it gets closer to the storage cabinet nearby, resulting in a kid-centric design on one side and a sophisticated one on the other.

In the powder room, Kelly Wrestler’s Crescent wallpaper invited an elegant dose of style to the compact space, outfitted with a few key pieces. “There was something so fun and unexpected about mixing it with a tiny little mirror and a great sconce,” says Svenstrup of the old-world glam effect of the room.

Channeling a similar aesthetic, the master bedroom took on a complementary vibe, all the while staying true to the pattern- and color-heavy nature of the home. “They already had the lighter colored burl wood dresser set, but they were desperately in need of more closet space,” says the designer. “Instead of renovating, I found even more burl wood to join the party.”

After bringing in two vintage burl wardrobes, Svenstrup outfitted the walls and ceiling with a bold teal paint and layered in plenty of animal-print textiles to establish a dramatic and moody tone—an ideal finish for the bedroom, according to the designer.

In the end, the home came to embody the bright and eclectic nature of the family living in it. Anchored by the storied vintage pieces, it’s a true success story in decorating with the pieces that bring you joy.