Even tight-knit families need some space. 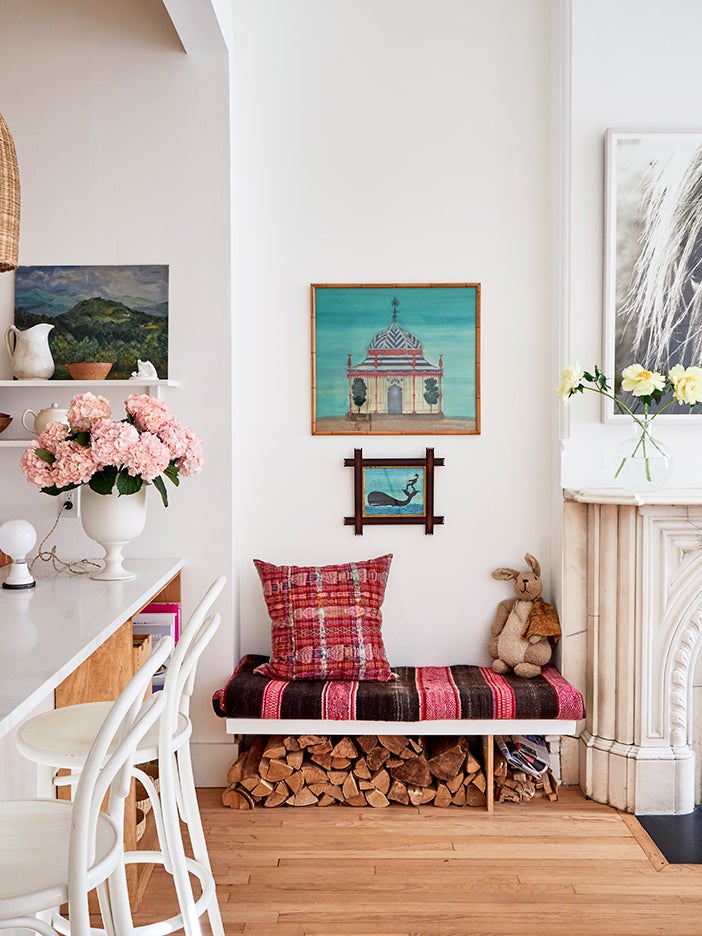 “I was pretty certain that I could make at least two bedrooms,” Holly Waterfield recalls of her initial assessment of the Park Slope, Brooklyn, studio apartment she was scouting for a former client. The designer, who works with the Brooklyn Home Company, was tasked with turning it into an appealing rental (at the time, it was mostly being used for bike storage). “It was really messyß but it had amazingly high ceilings,” she says. A big believer in hanging out in a home before making any renovations, Waterfield would go to the parlor floor studio every day and just sit there, waiting for her intuition to kick in. It didn’t take long before she realized she could carve out three separate bedrooms if she moved the location of the front door. “I really felt a lot of things shift,” she says. It just so happened that Waterfield and her two children, Emmy (13) and Bodhi (6), were in the market for a new rental—this place could be the perfect fit after some serious reconfiguration.

Turning a studio into a three-bedroom is a brain-racking endeavor, so Waterfield started with a basic sketch (see the old floor plan outlined in black and the new layout in red, below). Step one: Move the front door and turn the foyer into Bodhi’s room. Next up, tear down the old lofted bed that was at the center of the room and put the kitchen there, so Waterfield and her daughter could have their own spaces toward the back of the building, where it’s quieter. Two walls, two pocket doors, and one barn door later, and—boom!—a perfectly functional (and fun) family home. “In New York City, you need to figure out how to use every square inch more efficiently,” says Waterfield.

With the kitchen now connected to the main living room, Waterfield decided to go with simple quartz countertops and white cabinets to make the jam-packed space feel light and bright. The issue is, she’s not a fan of all-white kitchens. “They feel very sterile to me,” she says. Cue the supersize rattan pendant lamps and golden wood tones. Waterfield added a cubby above the refrigerator for her cookbooks and, more recently, one within the peninsula for all of Bodhi’s homeschooling supplies. “It’s a constant design challenge, but I love inventing spaces and figuring out: How are we going to live here?” says Waterfield. She clad the ceiling in long boards for extra warmth, saving any leftover planks to build Bodhi’s bed.

The most popular seat in the house is the swing. The playful addition was Waterfield’s way of taking advantage of a large beam and the nearly 5-foot-wide hallway. “It holds adults. It can hold both of my kids at once,” says the designer. “It gets used every day.” (Her daughter once swung so high her toes touched the ceiling.) The special spot gives the kids, who are seven years apart, some common ground: No one is too cool or too old for the swing.

“It’s a constant design challenge, but I love inventing spaces and figuring out: How are we going to live here?”

With a 17-year-old dog in the house, Waterfield had to get rid of most of her rugs (they just end up getting ruined), but there was one she couldn’t bear to part with, so she turned it into a cushion for the mini banquette. Underneath: fresh logs for the (yes, functioning) wood-burning fireplace, which she takes advantage of most mornings while brewing her coffee. “The swing and the fireplace have really gotten us through COVID,” says the designer. “It’s like, Oh, we’re done swinging. Let’s make a fire!”

Snuggled in between the mantel and the now-covered radiator is a sleek IKEA Ivar cabinet. Waterfield topped the storage piece and the adjacent heater with a single surface to make the additions look built in.

advertisement
“The swing and the fireplace have really gotten us through COVID.”

An avid collector of vintage folk art picture frames, Waterfield has a couple of eBay searches saved, so she gets notifications when people list them. Her most treasured works of art, however, are those created by her kids. Every year Emmy and Bodhi make a self-portrait, which she displays prominently in the main hallway. “I love how their perception of themselves morphs over time. Like, my daughter suddenly has eyelashes now,” she says, laughing. “I wanted to display all of them together because they tell a story.”

Formerly the entryway, Bodhi’s bedroom is tucked underneath the stairs that lead to the brownstone’s second floor, giving the space a Harry Potter–esque vibe. (His 28-inch-wide custom platform bed is made perfectly to fit him, at least for the next little while.)

Bodhi’s many toys and figurines live inside plain wood dollhouses Waterfield picked up at a Christmas market years ago. Anything extra (jump ropes, marbles) hang from a simple peg rail in mesh baskets. “Kids are more likely to play with their things when they can see them,” says Waterfield.

The hot pink ship that appears to float midair, Peter Pan–style, originally belonged to Emmy, but when she tired of the piece, Bodhi jumped at the opportunity to claim it for himself. “He loves anything his sister once had,” says Waterfield. “His room is full of her old jewelry, lip balm—he kind of idolizes her.”

Emmy’s bedroom underwent the most dramatic change. Not only does her bed not take up any of the room’s footprint (it’s lofted 7 feet off the ground), but the corner was once the kitchen. With gas lines still existing within the walls, it made the most sense to situate the washer and dryer there (Emmy’s clothes and the laundry machines coexist behind the closet doors under the bed). In addition to a proper desk on the ground, she has a second workspace up top at the foot of the mattress—the surface is technically just a box of drywall Waterfield used to cover exposed pipes. Lastly, she hung basic 48-inch-wide rattan shades for some added color.

When they start to feel like they’re on top of one another, the Waterfields will head to nearby Prospect Park or pop out to the stoop for some fresh air (something Bodhi can do on his own). “As Emmy gets to be a teenager, she’s wanting a bit more privacy,” says Waterfield. “She’s learning to slam her sliding door.”

The now-three-bedroom place is hardworking by all means, and it has everything to do with the fact that big bedrooms weren’t a necessity for Waterfield. “My goal was to maximize the hangout space,” she says. “I want to see my kids.”

The object in my house that gets the most use: The swing! Also the Intiearth floor pillow for lounging.

The fabric in my house that is so me: Any of my vintage frazadas.

The hardest-working plumber around: Allstate Piping.