How One Blogger Is Empowering Others to Do It Themselves

Sarah Gibson gives her readers the tools, and confidence, to tackle home improvement projects on their own through her blog, Room for Tuesday. 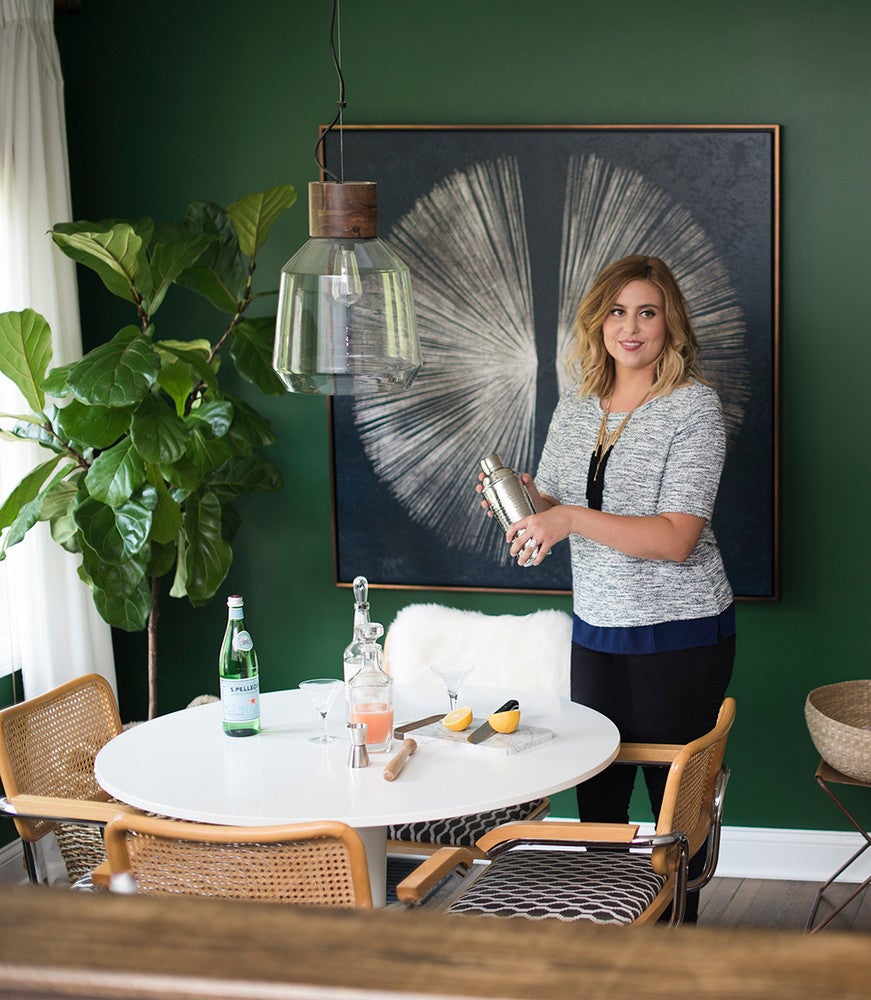 Room for Tuesday was named the Best Lifestyle Blog in the 2017 Domino Design Blog Awards.

When Sarah Gibson decided to trade her nine-to-five graphic design job for a full-time go at interiors, she couldn’t have guessed how one major move, one blog, and countless home improvement projects would change her career.

The Indiana-native, who now calls Salt Lake City, home fell in love with interior design by chance. While renovating their first home in Ohio over three years ago, the blogger and her husband-turned-DIY-master, Emmett, became obsessed with making over their house and documenting the design journey in the process. And while Room For Tuesday has expanded to include styling, entertaining, and market round-ups, renovations and home improvements are still at the core of her online haven. Gibson’s goal is to prove that renovating your entire home—sans contractors—is not only possible, but it can actually be pretty fun, too.

“At first, I wasn’t really expecting the blog to be so time consuming,” Gibson recalls. “I didn’t expect so many people to be interested in our journey and what we were up to or what I was sharing.”

With a background in fine arts and graphic design, the blogger geared up to branch out on her own after learning the ropes at a local interiors firm in Ohio. Since launching her blog in 2014, Gibson has focused on offering readers endless inspiration, clever entertaining hacks, step-by-step DIY guides, and more. While readers will discover everything from how to restore vintage furniture to how to make the perfect cup of hot chocolate, much of her work centers around projects that hit a bit closer to home—emore specifically, her home.

Since starting fresh with a second reno (this time in Utah) a little over a year ago, Gibson has been steadily keeping her followers up to date on the progress on her charming SLC home—where she not only runs her blog, but also an online print and decor store and a full service creative and design agency, appropriately dubbed Tuesday Made. Her savvy and attainable advice has won her a slew of dedicated readers.

When Gibson and her husband decided to pack up their life into a U-haul and start over out west, the move certainly didn’t scare them—and neither did taking on a home that needed a serious facelift. Since laying roots down in Salt Lake City, the duo has tackled a number of projects, large and small (like gutting the bathroom and adding built-ins by the fireplace), all the while styling spaces according to her self-described aesthetic: eclectic, modern, and curated. “I like to include stuff from all over. I’m a big fan of thrifting,” she tells Domino.

No stranger to estate sales, Craigslist, or online vintage sites (her favorites include Chairish and Everything But the House), Gibson is constantly on the hunt for one-of-a-kind decor, like the vintage wooden hand in her entryway. “I think that you can find some unexpected hidden gems if you just dig. You have to sort through a lot of bad to find something really great, which is time consuming, but rewarding,” she says.

Love her creative console accessory? You can find a replica by a local Salt Lake City artist in her shop here.

When it comes to hours and elbow grease, her most challenging project to date has, without a doubt, been the backyard—a transformation you might recognize from when we caught up with the blogger this fall to talk all things styling. What was once a completely bare-bones yard is now a chic outdoor retreat—that is, thanks to ten thousand pounds of concrete and over 300 hours of hard labor.

Throughout the summer, Gibson shared her and Emmett’s progress on the space, as well as easy-to-follow guides. And while doing manual labor with your significant other would sent most people straight to couples therapy, Gibson and her husband couldn’t imagine working any other way.

“I think that if you can renovate together, your marriage is in a pretty good place!” the designer jokes. “Sometimes I doubt his skills, and he always pulls through, which is surprising and rewarding and amazing.”

Above all else, the pair makes renovating on your own look pretty doable (yes, even installing paver patio). Being a resource for amateur renovators, aspiring designers, and homeowners in general has been the most exciting part of her blogging journey.

“It’s so rewarding to have people come and say, ‘You know what, you actually made this look pretty easy,’” Gibson explains. “After getting quotes from contractors [for the backyard] that were $35,000 and really out of our budget, I said, ‘You know what, I think we can tackle this.’ To just save people that kind of money and empower them to take a stab at something themselves is really rewarding.”

While certainly a place of refuge for homeowners tackling their own projects, Room For Tuesday also serves as a space for small space dwellers to seek inspiration. Considering her two-bedroom home is on the teenier side, championing cramped and unusual spaces is a task the designer knows all too well, and her most recent feat—a complete bathroom gut and redesign—serves as proof.

“It’s five-feet by almost eight-feet,” Gibson says of the space she transformed for the One Room Challenge. “That didn’t leave a lot of room for modification or floorplanning.”

Her design fix? Using black paint and a ceiling track shower curtain to trick the eye into thinking the space is larger than it actually is. “Just implementing little things like that and using finishes that were a bit higher end make the space feel a bit more luxurious, instead of just small,” she says.

When it comes to sourcing inspiration, Gibson not only relies on Utah’s unique landscape and culture, but she also turns to fellow design bloggers. “I think the best part about the blog’s growth has been meeting new people and making friends who have similar stories,” Gibson says.

While Room For Tuesday, the lifestyle blog her thousands of followers know today, officially began in 2014, Gibson’s blogging journey can actually be traced back to her college days. “One of my design professors actually assigned all of the students to create a Tumblr, and the class was on Tuesdays. So, it was my ongoing thing to make room to blog on Tuesday.”

Years later, she launched the real deal. Of course, “room” now seems only fitting given her natural knack for interiors. And as for Tuesday? “I feel like good things are notoriously happening on Tuesdays,” Gibson laughs, “Like finding out I had won this award. It’s kind of our lucky day now.”

This Scandi Design Blogger Is Making Everyone Want to Move to Sweden
Get all the news you never knew you needed when you sign up here.