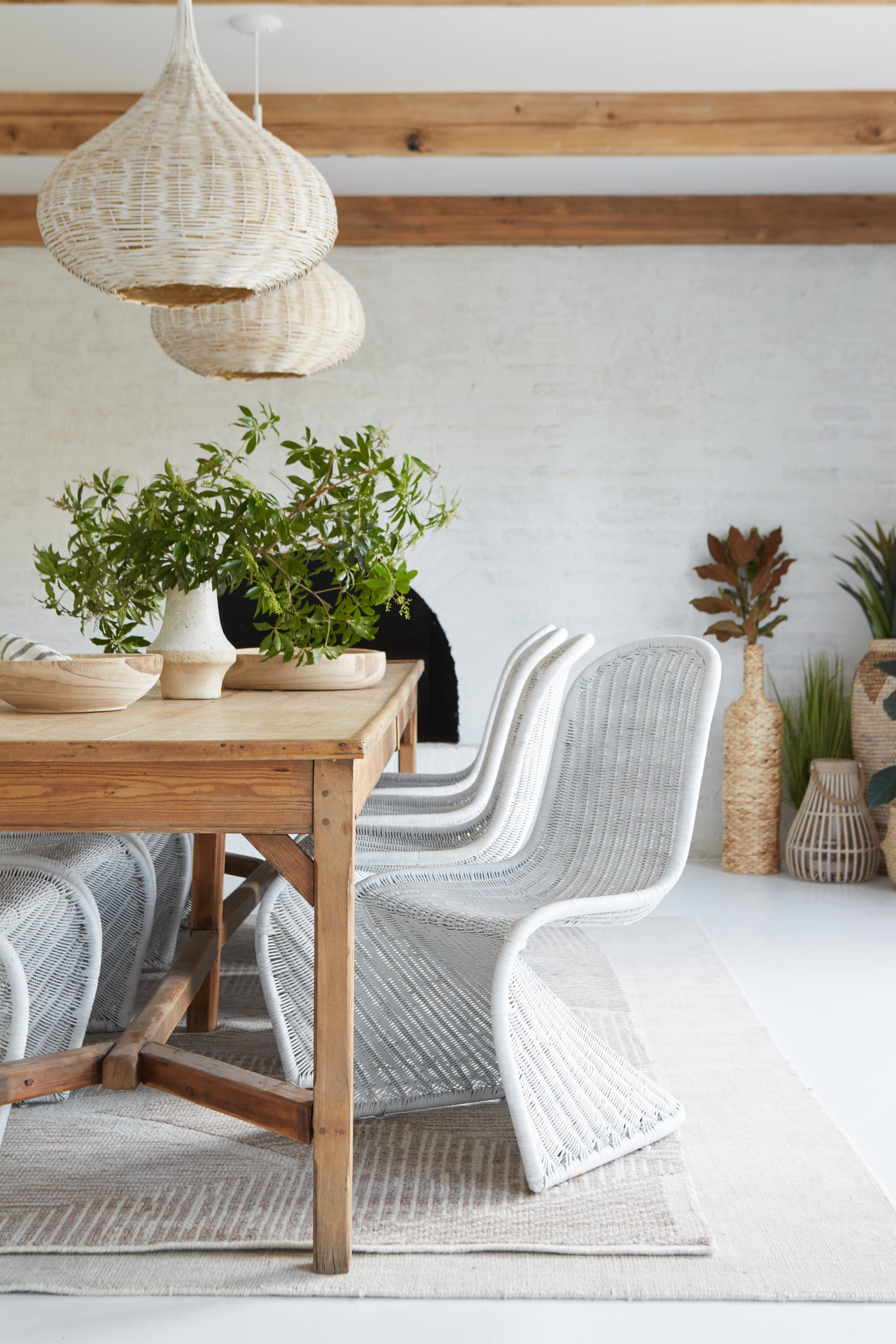 If the latest episode of Restored by the Fords didn’t awaken your inner wanderlust, we don’t know what will. Now in its second season, Leanne and Steve Ford’s hit HGTV show took a turn for the Mediterranean last night. From the inside, you’d never know this Pennsylvania home wasn’t sitting along the Aegean.

“They wanted to feel like they lived in a vacation home,” says Leanne Ford of the homeowners. “So we brought a little bit of Mexico and a little bit of Greece right here to Pittsburgh.”

Fortunately for all of us watching at home, the seasoned designer’s clients like white as much as she does, and there’s little we love more than watching her signature palette play out in a home steeped in history. “This place has great bones and just needed some freshening up,” continues Ford. “They originally asked about opening up the wall from the kitchen to the front room, but we convinced them that they didn’t need to do that. The rooms were large and the layout was great, so we were able to spend more of our budget on cosmetic details, such as that magical staircase.”

Ahead, Ford gives us a behind-the-scenes peek inside her latest project and breaks down the allure of decorating with white.

Commit to the Obvious

If you thought you couldn’t make a statement with neutrals, this impeccable entryway will change the way you feel about the classics. The existing spiral staircase was a natural focal point for the space—all Ford had to do was introduce some TLC. “We knew it had to stay magical somehow, but we had to create something that was safer and modern—something that would update the feeling of the entire home,” shares Ford.

advertisement
“We were able to spend more of our budget on cosmetic details, such as that magical staircase.”

Likewise, Ford and her brother stuck with the structural platform that frames the front door and decided to take advantage of the step with a high-impact cement tile. “Instead of trying to blend it in, we made it a special design feature with some Mexico-worthy tile,” adds the designer.

Basket lighting, woven planters, and ceramic vases infuse the home with a sense of eclecticism. Ford applied her artful eye for layering in the living room by topping a lightly painted sisal rug sourced from Amazon with a smaller striped carpet from Restoration Hardware. “I love how that turned out,” says Ford of the hack. She added dimension to the formal dining room and eat-in kitchen with this same trick.

Spice Up Stark Whites with Wood

Just when we thought white kitchens had officially peaked, Ford swoops in with a home that makes the palette feel fresh again. Her secret? It’s all about the finishing touches.

advertisement
“The salvaged wood shelving, the faux shutters by the kitchen sink, the basket lights—those details warm everything up.”

“To warm up the all-white kitchen, we brought in wood details,” says the designer. “The salvaged wood shelving, the faux shutters by the kitchen sink, the basket lights—those details warm everything up.” On the floating shelves, treasured trinkets—both old and new—fill in the gaps between ceramic plates and serving boards.

Ford’s all-time favorite piece from this project is the salvaged farm table in the fireplace dining room from Weisshouse. An assortment of sky-high basket planters turned the farmhouse moment into a tropical adventure. Moroccan drop lights from Heja Home complete the transportive escape.

Running throughout the house, the white concrete floors act as a cohesive tie between the rooms on the first floor. “It was a visual decision but also a huge budget-saver,” shares Ford. The clean slate makes a case for skipping new hardwoods and grabbing a can of paint.

Let the Windows Enjoy the Spotlight

In the kitchen dining area, Ford’s primary focus was drenching the space in natural light. “The dining room is all about the window,” she explains. Though, when dusk rolls around, the homeowners can take advantage of the larger-than-life pendant that presides over the table—a piece that might look familiar to Target shoppers, who have been living for the designer’s new lighting collection for Project 62.

“I always like to hang something that might be ‘just a little too big’ but also love how light and airy this one is for this space.”

“I didn’t tell anyone it was mine,” Ford jokes about sneaking in the sample rope net fixture. “I always like to hang something that might be ‘just a little too big’ but also love how light and airy this one is for this space.”

“Airy” only begins to describe this jaw-dropping transformation. We’re suddenly in the mood for an overdue vacation—how about you?