This Family Sold Their Home and Bought an RV to (Successfully!) Pay Off $118K in Debt

As well as spend more time together and see all 50 states. 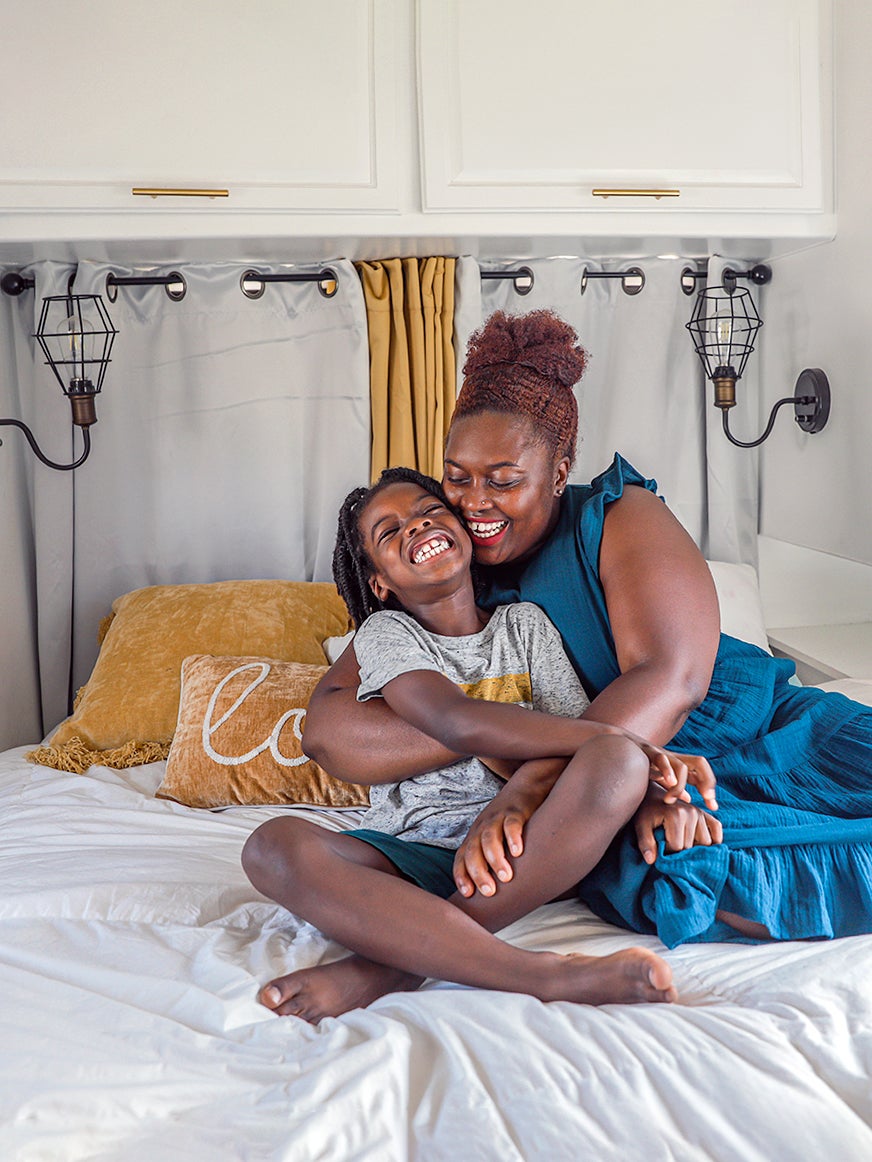 Karen Akpan, the voice behind The Mom Trotter, has B.A. and M.S. degrees, but it’s her “Ph.D. from YouTube University” that she uses the most these days. The first rabbit hole of videos she went down had to do with personal finance. She and her husband, Sylvester, had $118,000 in student loans looming over their heads, plus they owned two houses in California (one of which was a rental property). “Being a landlord isn’t the best idea when you haven’t fully paid off your debt,” she says. “It was a mess.” Realizing they were working 30 times harder than most people just to keep up with their everyday expenses, Akpan watched money tutorials on repeat. Then she started bingeing RV videos. “I thought, if we sell our homes and go on the road, we can pay off our debt and spend more time with our son,” she says.

It took some convincing to get her husband on board with the plan, but following a test trip through Arizona and Utah in a rental, they purchased their very own fixer-upper on wheels from Facebook Marketplace. After making much-needed renovations, they started their journey to living debt-free—and visiting all 50 states (their 8-year-old son Aiden’s idea). So far, they’ve been to around 20. “My favorite place was Florida because of Disneyworld,” says Aiden. “I can go anywhere I want to and take my home with me.” Ahead, Akpan shares what it’s been like to tackle all types of new territory in the past year, from living in a tiny space to road-schooling.

Edit Your Belongings—To the Extreme

While the RV was in pretty bad shape when the couple purchased it, it was, most important, affordable. The only major cost would be their time: They changed the flooring, painted the walls and cabinets, swapped out the countertops, and gutted the bathroom in about a month-and-a-half. While Akpan used to be a collector of niche cooking tools and appliances, those items had no place here, mainly because they wouldn’t fit. “We sold about 80 percent of our stuff,” she recalls. Luckily, getting by without tons of toys or a big-screen TV hasn’t been all that difficult, and making dinner is still a family affair. “I don’t miss anything,” she says.

For the things they do need every day, such as clothes, Akpan has come up with a clever system. All their shirts and pants are stowed away underneath the couple’s bed in colored packing cubes. That way, if Aiden needs a pair of shorts in a flash, she knows the exact bag to grab. “We had always used them when we traveled, so I thought they’d be super-helpful now,” she says.

Storage-savvy furniture, cabinets around every corner, and loads of baskets have also been a major headache saver. Aiden’s few toys are tucked away in his lofted bed area, but with nature just outside his window, he doesn’t need all that much space for his things. He spends more time scavenging, playing, and scootering outside than he does curled up with an iPad.

Rather than follow a traditional curriculum, Aiden is a self-directed learner—”homeschooled, world-schooled, unschooled,” as Akpan puts it. He might start his day with a bike ride around the RV park; read a little; and then pick a topic to discuss, like snakes, volcanoes, and, yes, even finance. “The other day he woke up and said, ‘Mom, I want to buy some Tesla stock.’”

Akpan and her family were already avid travelers before they decided to take their whole life on the road. Several years ago, they founded Black Kids Do Travel, a platform to inspire and encourage families of color to travel the world by sharing their own stories, as well as those of others. The aim is also to reach advertisers, big blogs, and families who aren’t Black. “There’s a lack of diversity in the travel space in general,” says Akpan. “I want people to know that Black families do RV. If you don’t see something, then you’re probably like, ‘Oh, it doesn’t exist.’”

“When you know better, you do better,” has been Akpan’s motto through it all. Over the past year, the couple has followed the avalanche model, where you pay your biggest debts first and work from there. Today they only have $1,000, give or take, left to take care of. Their newfound lifestyle has allowed them to save about 90 percent of their income, and Akpan knows exactly where every dollar they do spend goes. The plan for the foreseeable future is to stay in the RV, continue to travel, and keep exploring.

“It has really changed us,” she says. “Our son has both of us and, for me, that’s the most important thing. I want to raise him. If you just reduce your expenses, you can always be there.”