Funny Halloween Movies for the Faint of Heart 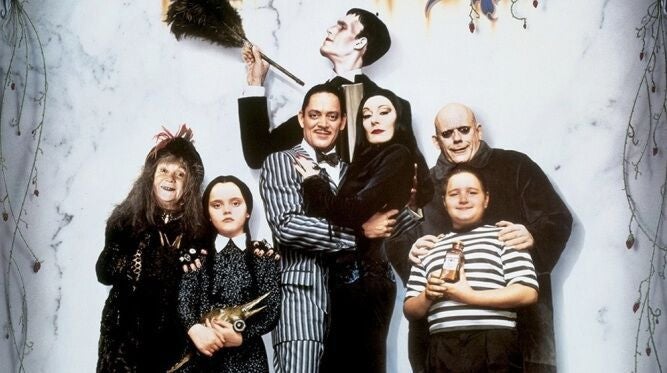 While some people look forward to Halloween as an excuse to have nightly slasher film fests and spend October with hearts racing and hairs raised, others prefer more playful aspects of the holiday. These 12 Halloween-related films celebrate ghosts, witches, and all the other typical characters found on Halloween, but without the fear factor. Among them are several that even tiny trick-or-treaters can watch (although we’d be hard pressed to find someone of any age who would turn down a viewing of “It’s the Great Pumpkin, Charlie Brown”). So if you like your Halloween film fare with a side of humor instead of horror, these flicks are for you.

The cult classic, starring a pre-Sex and the City Sarah Jessica Parker, Bette Midler, and Kathy Najimy, is a much beloved Halloween staple; the Internet went crazy recently when rumors of a sequel surfaced. A pair of siblings and a friend must take action when three witch sisters come back to life on Halloween night.

Tim Burton’s The Nightmare Before Christmas

This stop-motion animation film is deliciously decadent on the eyes (as well as being a tremendous source of inspiration for Halloween costumes). Bored with being in charge of Halloween each year, Jack Skellington decides to steal Christmas and attempts to give the jolly holiday some special spooky twists that are definitely more “trick” than “treat”.

These fun, family-friendly films follow the wealthy Addams Family as they navigate life in an untraditional way. In the first film, Gomez Addams’s supposed long-lost brother Fester attempts to infiltrate the family and take over their money. In the second film, another outsider (the family babysitter) attempts a similar maneuver. In both films, Angelica Huston shines as sexy matriarch Morticia and a young Christina Ricci is adorably angsty, grim-faced, and obsessed with death as daughter Wednesday.

Even if you haven’t seen this 80s flick, about an unpopular teenager named Louise who discovers that she has magical powers, you probably have heard “Top That,” the infamous rap that the teen witch’s best friend delivers. Fun fact: Blake Lively’s big sister plays the teen witch! Fun fact #2: Louise’s best friend is played by Mandy Ingbar, who has since gained fame as a celebrity yoga instructor (with clients including Jennifer Aniston).

Actress Fairuza Balk (who went on to star in scarier witch fare such as The Craft) stars as little Mildred Hubble, a young witch who can’t seem to do anything right at her witch academy.  When the headmistress’s evil sister plans to destroy the school, Mildred must step in to save it. Tim Curry serves as the Grand Wizard coming to visit the academy (and who engages in a little song while he’s there). Look for this TV movie on the tube in the month of October.

Speaking of Tim Curry, the cult classic The Rocky Horror Picture Show wouldn’t be the same without him. The meandering plot begins like this: an engaged couple (one half of which is played by Susan Sarandon) breaks down during a storm and takes shelter in a nearby castle owned by a mad scientist/alien transvestite played by Curry. Much song and dance follows, performed by a huge cast of quirky characters. Released in theatres 40 years ago, The Rocky Horror Picture Show is still showing today, making it the longest continuous release in history. Extra Halloween showings are prevalent at local theaters across the country so check one out –and don’t forget to dress up!

The Peanuts Gang prepares for and participates in the Halloween festivities in this short, classic film (also a staple during the month of October on television channels). Linus is completely devoted in his quest to wait for the mythical Great Pumpkin, writing Santa-esque letters to him and waiting all night for him to make his appearance. Meanwhile Charlie Brown and the rest of the crew make costumes and go trick-to-treating, with varied results. Good clean family viewing fun!

Another of Tim Burton’s stop-motion animation films, Corpse Bride is the tale of a financially advantageous arranged marriage that goes awry when the groom, while practicing his vows, accidentally weds a jilted corpse bride. Victor is taken to the world of the dead with his new bride, but he continues to fight to return to the world of the living and his betrothed. There are plenty of skeletons in Corpse Bride (so parents of teeny tiny viewers might want to take a pass), but they are more campy and humorous than scary.

Two recently deceased ghosts go to great lengths to rid their house of its new tenants, including hiring the devious Betelgeuse, who promises that he can exorcise the living. The stellar cast of this movie (including Michael Keaton, Alec Baldwin, Geena Davis, and Winona Ryder) is matched by the deliciously fun style of director Tim Burton, which includes plenty of cheeky humor to the grotesque and macabre. This movie isn’t quite appropriate for the under-seven set, but older kids will love the comic relief of Beetlejuice and the gross-out tactics that the main characters use to rid themselves of the new family.

A ghost movie that won’t cause nightmares? Casper is your movie. Known as the friendly ghost, Casper befriends a young teenaged girl named Kat when she moves into a haunted house with her father, a paranormal expert who has been hired to investigate their new surroundings. Unfortunately for Casper, his trio of ghostly uncles as well as the scheming heiress of the house makes mischief for everyone involved.

The Book of Life

This gorgeous animated film tells the story of Manolo, a talented bullfighter whose real passion is music. Manolo and his best friend Joaquin (now the town hero) are both vying for the hand of fiery and independent Maria, a young woman that they grew up with and who has just recently returned to town. The movie beautifully and poignantly explores the Day of the Dead, the Mexican holiday that celebrates the lives of those who have come before and passed away. The Book of the Life takes the heavy topic of death and makes it vibrant, approachable for children, and a visual feast.

This movie, featuring a young Jim Carrey, is a little racy for the young ones, but it’s one of the only lighthearted and funny vampire films we’ve come across! Supermodel Lauren Hutton plays a vampire countess who needs virgin blood three times before Halloween in order to maintain her beauty. She preys upon Carrey’s character Mark, a sexually frustrated college student, who in turn begins to transform into a vampire. Cheesy and entertaining 80s hijinks ensue!