This Home Has Our Dream Kitchen AND Bathroom

How one LA designer created her perfect mid-century modern space. 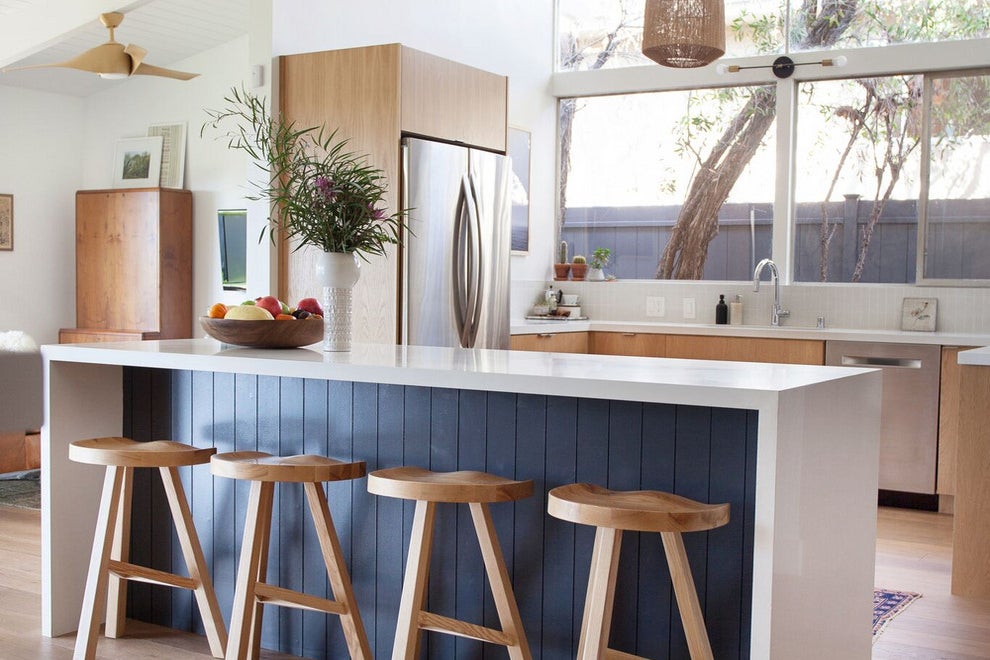 As an interior designer, you’re tasked with bringing a client’s vision to life—be it by way of a gut reno or a budget-friendly refresh. Throughout this process, one comes across an expansive array of ideas and elements, eventually edited to fit the needs and expectations of the client. So what comes of the remnants of said inspirational discoveries? We’d venture a guess that they are cleverly bookmarked for future projects and in some cases (much like this one), for a remodel of the designer’s own.

We have long admired the work of interior designer Natalie Myers, whose laid back approach to the modern-meets-boho-meets-Cali-cool aesthetic never fails to please. So when we got word that she recently renovated her new home, we knew something good was in store.

Situated in the lesser-known neighborhood of Ladera Heights—tucked between LA’s Inglewood and Culver City—is Myers’s new “forever home,” which she shares with husband Alec and their two children, Lev and Ilana. The 3,000 sq ft abode is relatively large in size—a major drawing factor for the couple—and is what Myers describes as an “undisturbed mid-century modern home.”

“They rarely go on the market,” notes Myers. “We stalked the neighborhood for a while and got aggressive when the house came on the market. As soon as I walked into this house, I felt immediately connected to it, and knew it just had to be my future home.” And despite its outdated nature, a result of over 40 years of deferred maintenance, the couple took a leap of faith on the property with the intention of ushering it into the 21st century.

The home’s post and beam architecture was one Myers was intent on preserving, along with the mid-century modernist aesthetic, a dominant aspect of her decorative style. Inspired by the natural environment of the home, Myers set to work, editing and refining the two contrasting elements to establish a space that would feel unique and edgy, yet comfortable and open for her family of four.

The original architecture of the home was Myers’s primary source of inspiration, along with the natural stone hearth within—interestingly, the two exact characteristics she had on her wish list. Decoratively, the goal was to pull from the earthy hues and textures of the hearth and to strip away any of the added frills from the structure of the home to yield a minimalist yet organically modern space that would complement the quintessence of the surround.

In the kitchen, the abundance of natural light would become a major component of the design. Originally, the space was enclosed, comprised of dark wood cabinetry that stood high up on the walls. Myers reconfigured the layout—a wall teardown was involved—to make way for an unobstructed view of the windows and brought in white oak cabinets to complement the new scheme.

The waterfall island, a focal point of the kitchen, carries on the vertical panel treatment that would continue into the bedroom and dining room, doubling as a low-effort accent wall. Finished with a deeply tonal shade of blue (Benjamin Moore’s Raccoon Fur, to be exact), Myers opted for said hue in order to impart the kitchen with an element of contrast as well as a method to cover up the inevitable footmarks that would ensue from her little ones.

The converted pantry (once the laundry room) makes up for the pared-down cabinets with ample room for storage, while the remaining space, in turn, made way for a statement-making

The best way to make bedroom ceilings seem higher? Opt for a low bed. Myers’s low-frame bed inspires a bold visual element to the room, alluding to classic Japanese-style beds. Vertically-paneled walls set the backdrop—a clever cover up for the existing chinoiserie wallpaper, which had been originally installed with an oil-based glue, rendering it nearly impossible to be removed. “Instead of frustrating my builder, I saw it as an opportunity to install 4″ vertical panel boards that relate to the fence enclosing the zen garden beyond,” says Myers of the fix. “It was a new feature that feels original to the house and gives that accent wall subtle depth.”

In its original state, the bathroom was just as compartmentalized as the kitchen—walls separated the vanity and tub from the separate shower, toilet, and built-in closet. “Luckily not one plumbing fixture or pipe was in working order so I had the justification to take it all out and start fresh,” notes Myers of the space she converted. “The old shower became the toilet, the closet became the walk-in shower, and space was opened up into one large room.”

White oak (a recurring material within the home), saddle tan leather pulls, and a vintage Persian rug lent a dynamic layer of color and warmth, balancing out the stark minimalism of the modern scheme. “A really interesting feature of the bathroom is that it looks out onto an enclosed ‘zen garden’ a unique mid-century feature that makes the whole space feel spa-like,” says Myers.

One of our favorite parts? The adorable Kartell Componibili: “It’s a great plastic storage piece for the small spill-over items and it’s moisture proof. A nice complement to the other mid-century notes in the space like the bubble pendant and S chair.”

When it came to the flooring, Myers opted for the Cle Zenith tile, a pattern she had used in previous client projects and one she had always had in mind for her own master bath. In place of the standard

Myers opted for one larger in size (6×6) for a fresh and clean feel, lending a subtle yet necessary contrast to the graphic print of the floor tiles. As for the vanity, that was a result of one of the many perks of being a designer—rather than spending hours searching for the perfect one online, Myers opted to design a custom one instead.

Above, a vintage Persian rug captures the color theme of the home and imparts the room with a fresh, graphic detail.

Being strategic in her design decisions was also a major component of the remodel, and one that proved to be a challenge as well. “Like any remodel of a distressed property, spending the majority of your funds on the structure’s systems (asbestos abatement, roof, HVAC, electrical, and plumbing) is not fun and leaves less for the things you really want to spend on like gorgeous tile, hardware, and light fixtures,” says Myers.

In the vein of being strategic, making the home healthy is first and foremost, according to Myers. Although there is always time to improve on the more simple details and fixtures (especially when it comes to secondary spaces) investing in the decor of the rooms with higher visual impact is also key.

“When you are paying by the day for builders on site, stay focused and make decisions fast,” Myers advises. “We had the added challenge of living through the remodel to funnel our funds into the work, not on renting a second temporary dwelling. It was an adventure. Now that the house is complete, we can barely remember what it was like to live in the dusty construction zone with no kitchen.”

And while there still are a handful of updates left to be completed, it’s already home to Myers, “We still have tinkering to do in the backyard and adding in thoughtful layers with art and upgraded furniture, but for now it feels perfect to me and we plan to be here for decades. Just like the previous owners who loved it to bits.”