This Moroccan-Inspired Bathroom Is a Tile Lover’s Dream

Nothing to feel blue about here. 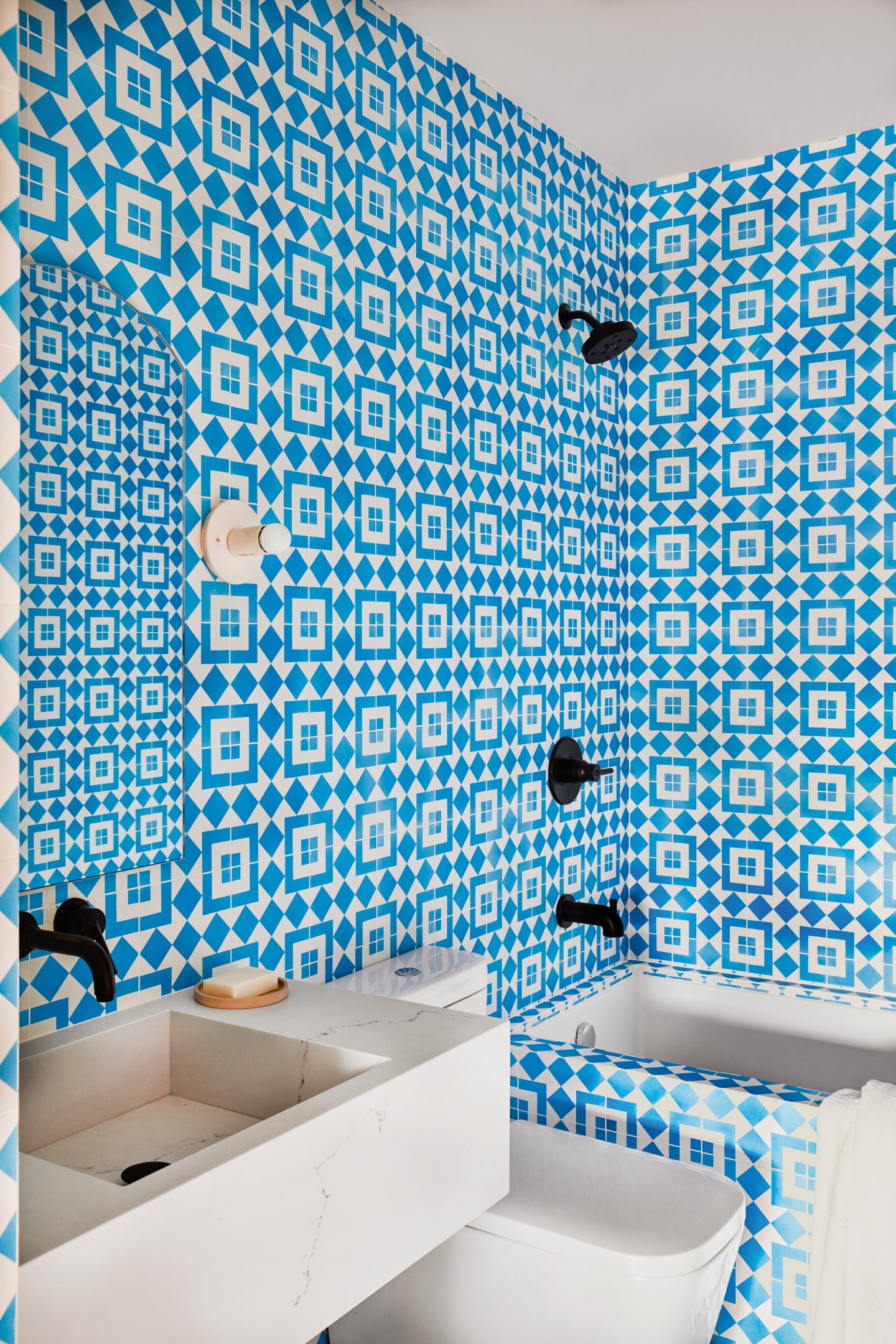 Garance Doré’s guest bathroom is the ultimate selfie spot. What the small space lacks in natural light, it makes up for in floor-to-ceiling tile—a breathtaking choice largely inspired by the O.G. influencer’s upbringing. “I was happy to bring a little bit of Morocco home, myself being half Moroccan,” says Doré of the Riad El Fenn blue and white tiles, named after the chic Marrakech boutique hotel. “These colors and shapes have inspired me for so long.”

With the help of designer Sarah Sherman Samuel, the French creative and style icon was able to channel hammam vibes in her very own Mar Vista home. “I wanted to go bold because that room was quite small and had no window,” Doré continues. “I needed to make it interesting and fun—even more so since it was for guests.”

Got a top-to-bottom renovation on the brain? You’re in luck! Re-create Doré’s oasis with the six finds ahead.

Meet Doré’s power move: A bright blue and white encaustic cement tile that, when used all over, instantly adds scale to a small space. The effect is mesmerizing—almost dizzying. The burst of color is ever the more refreshing considering the rest of her California home features warm terracottas.

Doré’s custom Caesarstone sink serves as a grounding force for the bold pop of pattern. Its subtle veining adds depth and character to the space without taking away from the tile.

Champagne bronze was a well-suited choice for Doré’s neutral master bathroom, but this bright space needed something with a stronger kick, something that wouldn’t blend into the background. The matte black showerhead and tub faucet give the room a modern punch.

While you wouldn’t know it just from looking at them, the Cedar and Moss sconces that frame the mirror actually feature a ceramic base. By working within the same family of materials, Samuel and Doré were able to mix and match different styles without compromising cohesion.

Sometimes, the smallest luxuries leave the biggest impression. When Doré’s guests come in to wash up before dinner, they’re greeted by a sleek brass soap dish. Pull off a similar look with this minimalist concrete tray.

You might not have to treat your guests like royalty, but, at the very least, you can upgrade your towels. Ditch the hand-me-downs for a bundle of crisp white linens. Not only will they elevate the overall design, but your friends will be raving about them for weeks to come.

See more stories like this: The Most Important Design Decision in Garance Doré’s New Kitchen Exclusive: Inside Garance Doré’s L.A. Home Where Terracotta Hues Steal the Show 6 Steps for Styling Your Entryway Like Garance Doré