This Brownstone’s Milan-Worthy Kitchen Was Once a Bedroom 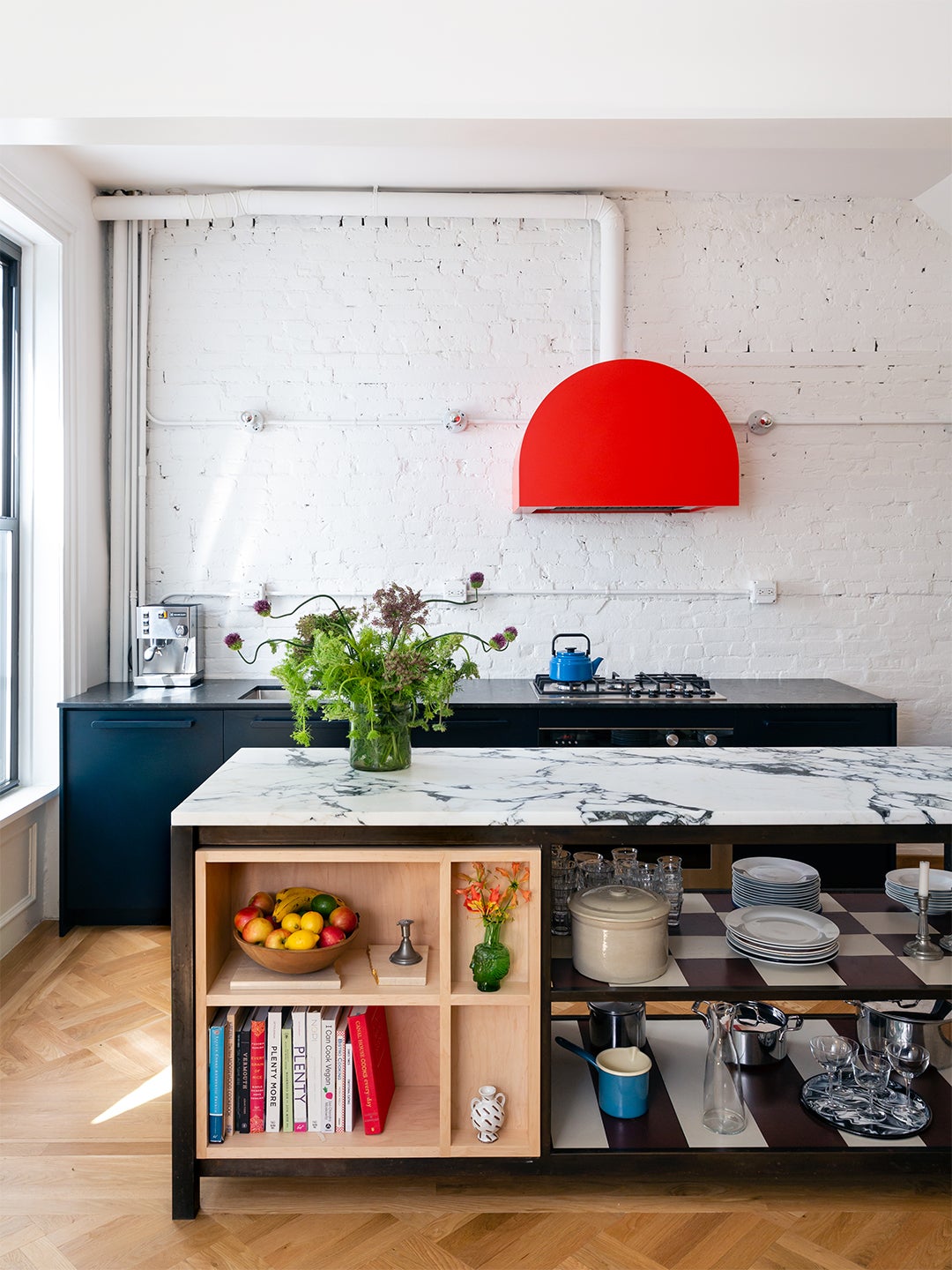 Ksenia Kagner and Nicko Elliott, the founders and architects behind Brooklyn-based firm Civilian Projects, have a special talent for designing kitchen islands. “We love the idea of it reading as a piece of furniture,” says Elliott. One they made for a townhouse in Fort Greene back in 2020 features an oil-finished walnut base with rounded corners and a bar on the counter-stool side that acts as a footrest. Then there’s the island they dreamed up for their own brownstone in Bedford-Stuyvesant.

Rather than plop down a boxy stone structure in the middle of their newly opened, 350-square-foot kitchen, the couple incorporated plywood maple niches where they can display cookbooks, as well as decorative items they sell through their just-launched online shop, Civilian Objects. They pulled inspiration from some of their favorite restaurants in Milan and painted striped and checkered patterns on the open shelves beneath the Arabescato marble worktop in a punchy oxblood hue. “I want to be free to try things and see how they look, see how they work, and then build upon them for future clients,” says Kagner.

You’d never know today that their bright, modern kitchen used to be a bedroom. (The kitchen was originally located downstairs on the garden level, but because all the natural light was on the parlor level, they decided to bring the cooking space up a notch—er, story.) After knocking down a wall, they carved out a wide-open space to build their dream kitchen. Ultimately, with two little kids at home, “we spend most of our days here,” says Kagner. “It was a no-brainer.”

Aside from wading through tricky city permits, the pair didn’t face too many logistical challenges moving the kitchen up a level. “It was pretty straightforward,” says Elliott. The only issue that came up early in the reno was one that stemmed from human error. The pair decided to ditch the old gas range for a wall-mounted oven, so they closed up the walls. But when their new appliance arrived, they realized they hadn’t put in the right power source to support it, bringing them back to the original arrangement. “To think even someone as experienced as us could make a mistake like that is a little embarrassing,” says Elliott, laughing.

The same grade-A maple plywood they used within the island makes a grand appearance on the adjacent wall. The blond-toned wood disguises not only the Bosch refrigerator but also the slide-out pantry (peep the tiny cupboard door by the stairs). “We wanted everything to read like a wall of paneling,” explains Elliott. All of the cabinet doors have small ridges so they can easily be opened, with the exception of the highest doors, which open with a light push. The surfaces were slightly sanded before a polyurethane coating was applied with a cloth. The designers toyed with roller, spray, and sponge applications first, but liked this solution best, as it gave the doors a matte finish similar to Charlotte Perriand’s furniture from the 1950s and ’60s.

Make It a Place of Work and Play

For the young parents, working from home usually translates to working from the kitchen. The issue is, they’re often carrying around big blueprints and drawings that they don’t want to lay down on a crumb-ridden countertop. Plus “being able to have your computer off to the side in its own place, separate from life, was very important for us,” says Elliott. So they incorporated a built-in desk nook on the other side of the threshold that leads to the living room, using the same maple plywood to achieve a cohesive appearance. “It looks like a writing table from the 1700s that you just open the lid to—it’s tidy and clean,” says Kagner. The corner will one day serve as a homework nook for their kids. “We tried to look into the future as much as possible,” she adds.

The section of lower cabinets by the new range are IKEA frames with custom door fronts. Even the deep green-blue hue is bespoke: Elliott and Kagner sourced pigment from a local artist after not being able to find a paint color at the hardware store that lived up to their expectations. The process involved mixing colored pigments with a white substrate and then applying layer after layer to the grain (around seven total). “It was definitely a labor of love,” says Elliott. “It’s like building up a Renaissance painting.”

Save on Architectural Lighting

One piece of advice the architects always share with other renovators is to not overspend on recessed or track lighting. The couple are fans of inexpensive porcelain sockets with silver-dipped bulbs (you can see them on the white-painted brick wall). This way they can save their money for statement lighting over the island. “That should be the investment,” says Elliott. “It’s a nice way to change the mood.”

Unsatisfied with the vent hoods they were seeing on the market, Kagner and Elliott decided to create their own. “It’s a white wall with no shelving—it really had to be something that either completely blended in or completely stood out on its own,” says Kagner. Once again inspired by Milanese design, they landed on an arch silhouette and swathed it in a poppy red laminate coating. While they usually lead with function first, form later, flipping the script paid off. “It’s so overscaled, but it feels incredibly good in the space,” adds Elliott. “It took us a long time to learn how to listen to our intuition.”

Your kitchen can also be a balance of beautiful finishes and objects. Below, shop some of the new Civilian Objects pieces in the designers’ space. In addition to their set assortment of hard and soft goods, they’ve released limited-edition projects in collaboration with contemporary makers, the first of which will include a work coat made with Rome-based Atelier Bomba, a hand broom by Erin Rouse of Custodian, candlesticks by Jesse Lazar, and an overdyed indigo apron by American brand Tilit. 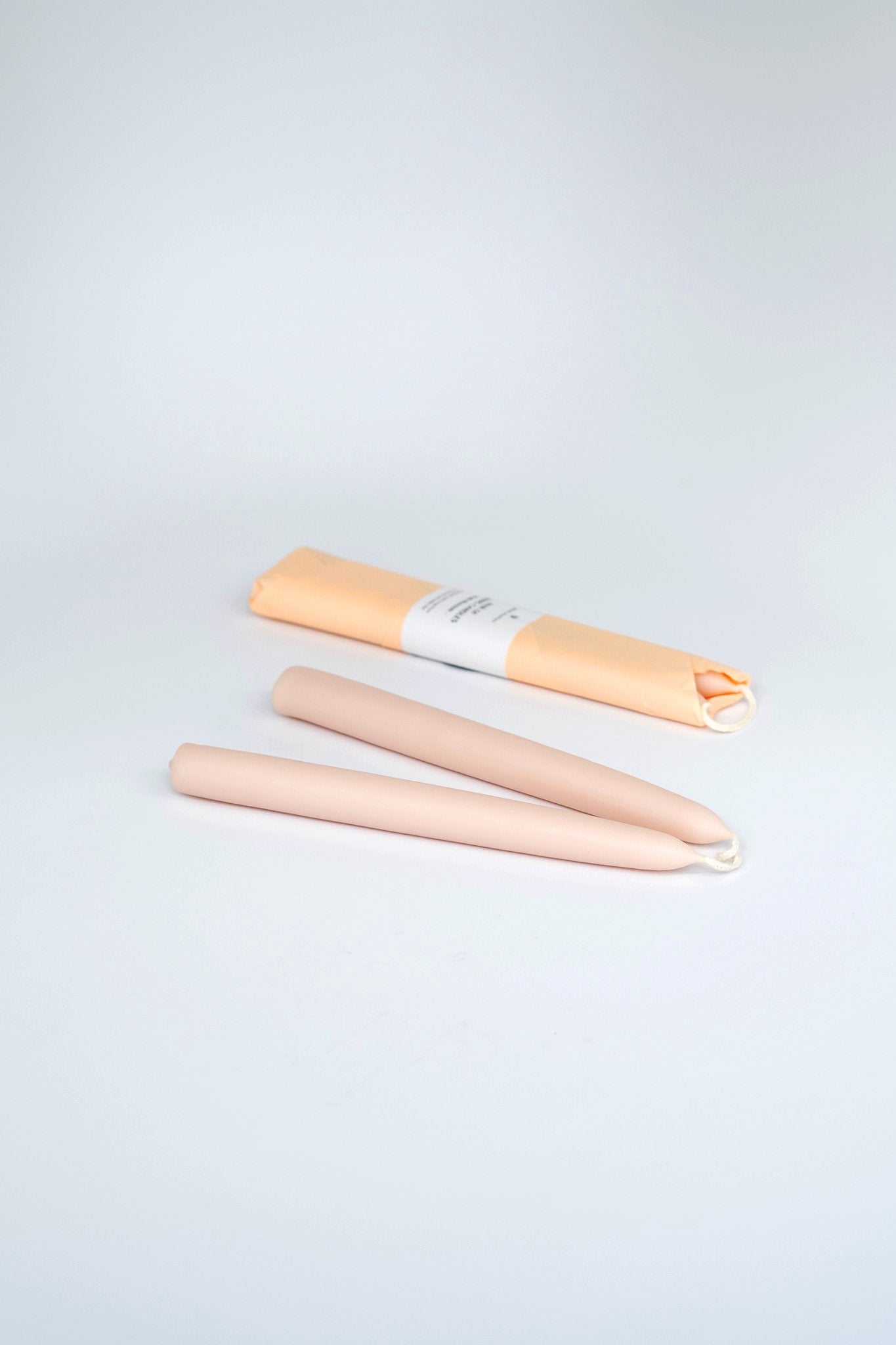 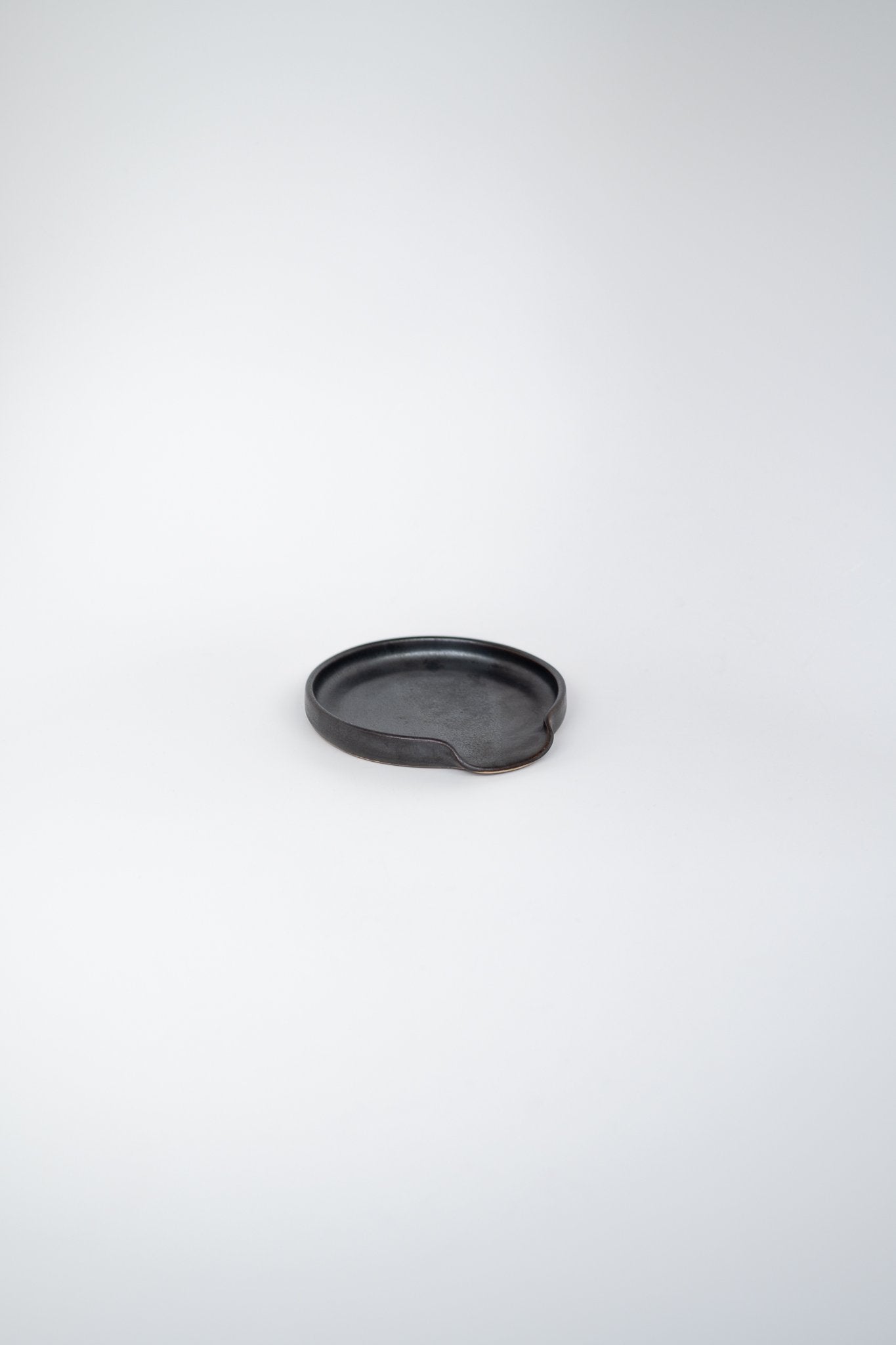 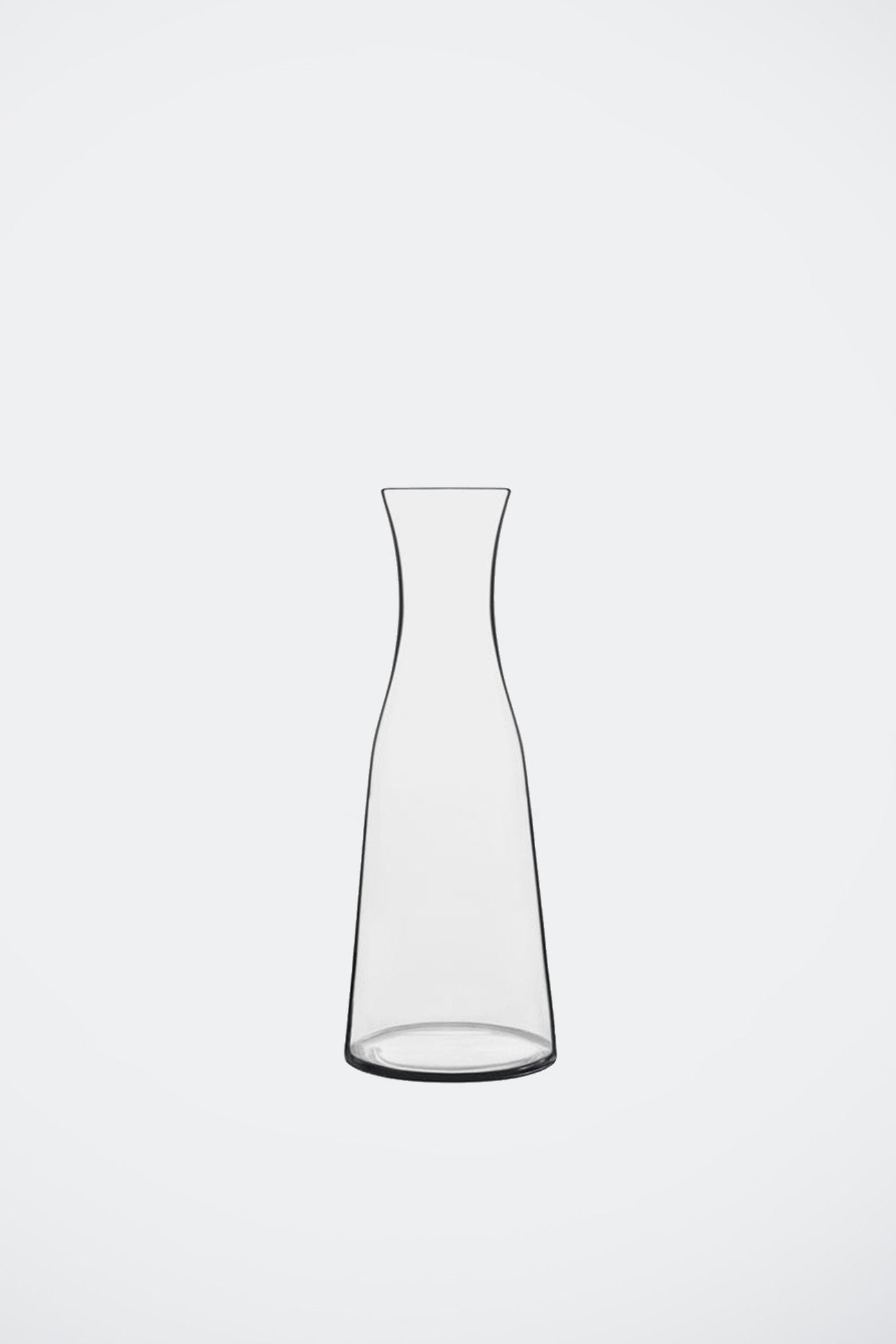 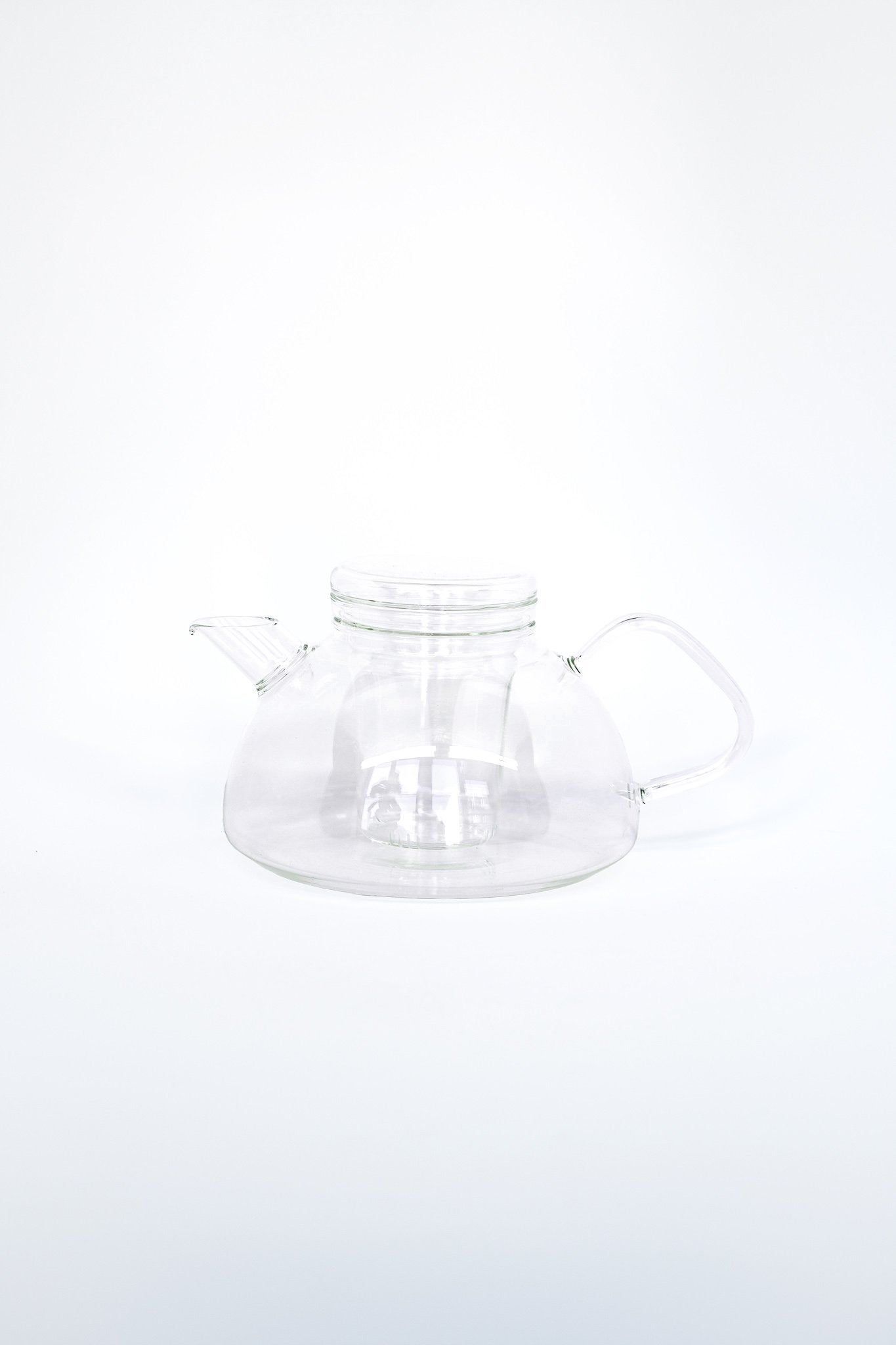 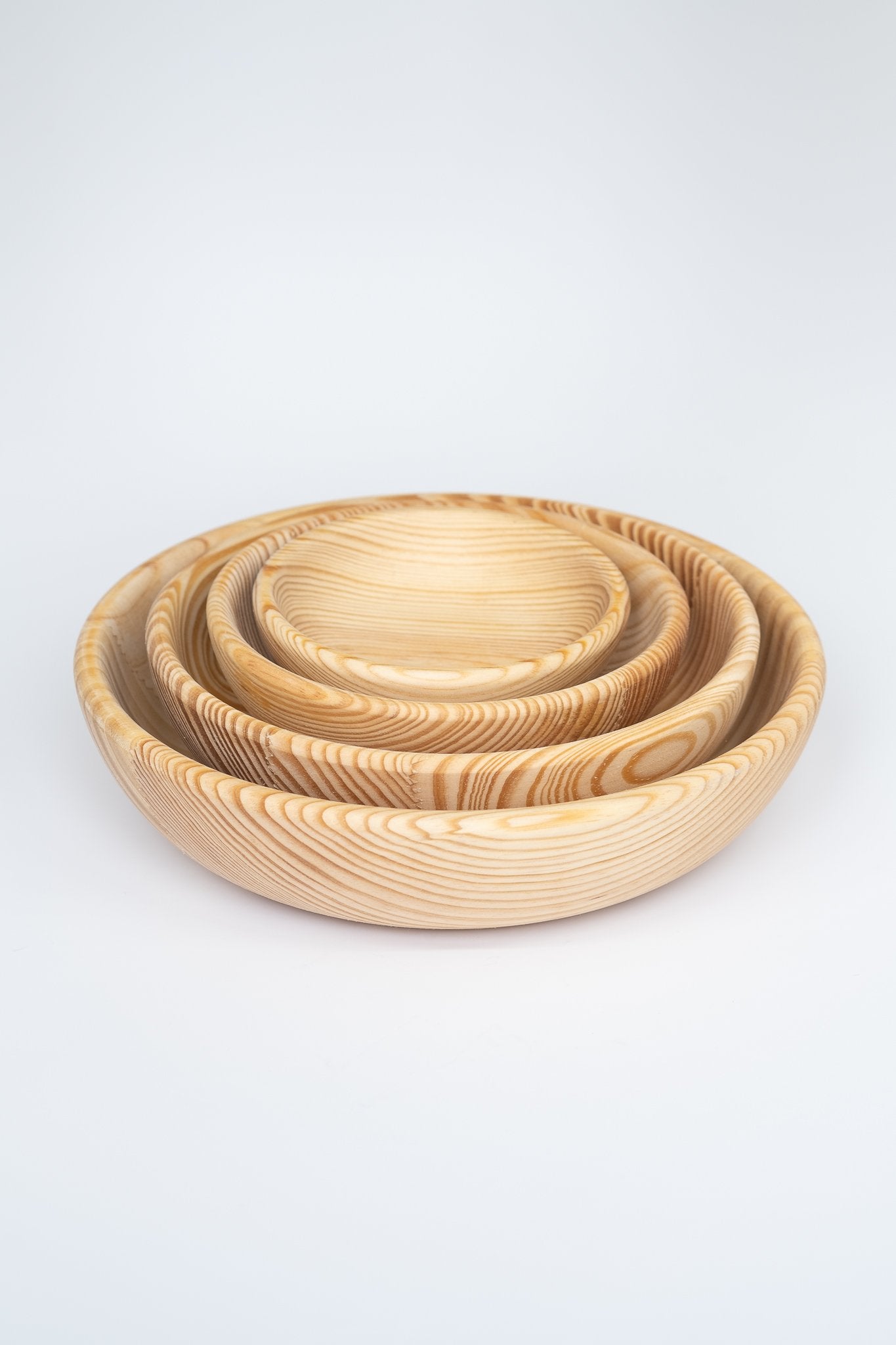 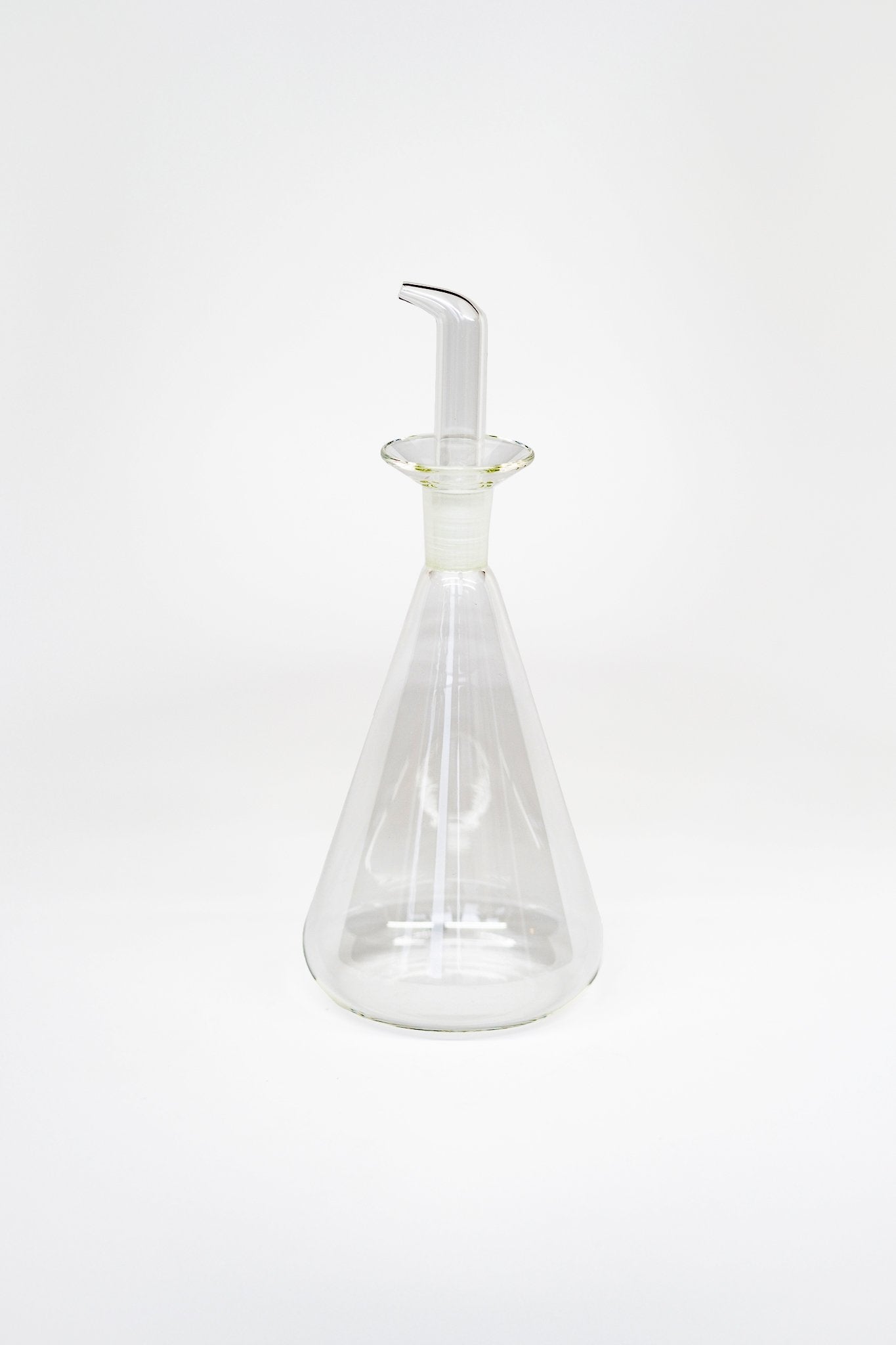