Meet the Millennials Who Have Gone Homesteading 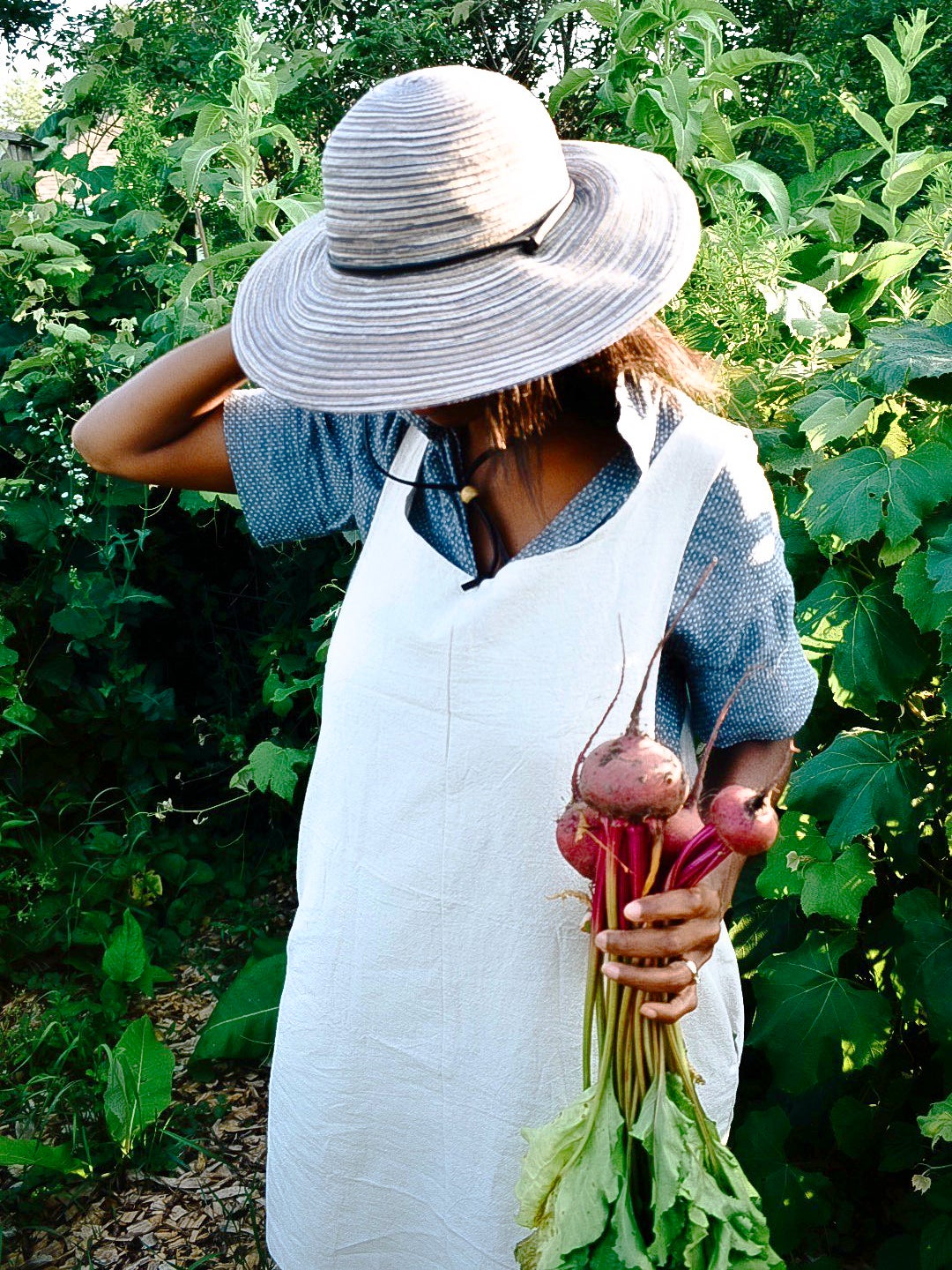 On Instagram, where the lives of strangers and friends are filtered to like-able perfection, there are certain images that evoke a specific kind of lifestyle envy. You know the ones: vacation photos; relationship milestone snaps; and pics of expensive dinners, expensive outfits, and expensive homes. But lately, a different type of imagery is starting to take over: a couple chickens in a backyard, a bowl of freshly picked vegetables, maybe even the occasional cow or pig. Millennial homesteaders are getting back in touch with nature, and they’re documenting their journeys online to thousands of fans.

It would be easy to view this alternative lifestyle as a pastoral ideal—after all, there is something charming enough about a picture of a cute goat that, coupled with a particularly rough morning commute to your city job, might just inspire you to go from corporate to cornfield, too. But homesteaders promise that painting a pretty picture for the ’gram isn’t their only intention. They’ve taken to social media to share their lifestyle, tips, and advice and to foster a community of their own. And just because they’ve opted for a simpler way of life doesn’t mean they have to give up technology. Here, a few of them share how they’ve come to forge their own old-meets-new lifestyle.

For Most, Sustainability Comes First

Homesteading, simply put, is the act of practicing self-sufficiency on your own land. That can mean running a small-scale farm, where you grow crops and raise animals for meat and dairy. But more realistically, people pick and choose what they do—a few have gardens and a couple chickens, others keep bees, and some raise livestock. But for all of them, the goal is straightforward: provide for yourself in a way that minimizes your environmental impact.

That’s why it shouldn’t be surprising that many millennials are drawn to the lifestyle purely from an eco-friendly perspective. Deanna T., who started a blog with an amazingly Internet-y title, Homestead and Chill, studied environmental science in both college and grad school and started her first garden when she was 21 years old. But it wasn’t until she purchased her first home in California in 2013 that she started her farm—on just 0.19 acres of land. “We removed every inch of grass and covered our front, back, and side yards with raised garden beds, fruit trees and vines, and flowers for pollinators,” she says. “It’s amazing what you can accomplish in small spaces when you put your mind and energy into it.”

Wisconsin-based homesteader Alyson Morgan found herself drawn to the lifestyle as she learned more about sustainability in college. “Although, as I reflect back, I also grew up with Anne of Green Gables dreams as a girl, and it turns out small-scale sustenance farming runs in my family,” she says. “My mother was born in the countryside of Haiti, where her family raised goats and chickens and grew their food, and my paternal grandmother has shared stories of how her mother managed a huge garden to feed her 14 children and community.”

“It’s amazing what you can accomplish in small spaces when you put your mind and energy into it.” —Deanna T.** **

Managing your own land, after all, is work—and it’s work that’s done with the aim of providing for yourself. So it makes sense that those most drawn to it might already be inclined to embrace nature-focused modes of living. “To be honest, we never really made a decision to start homesteading—it’s kind of just who we are,” says Vermonter Lauren Murphy. “Even while living in a city, we would drive hours to collect 20-plus gallons of spring water, harvest wild food whenever we could, had a veggie and meat CSA, and ate as locally as possible.”

Admittedly, just because you want to live more sustainably doesn’t mean you’re necessarily willing to give up your city (or even suburban) life and rework your schedule to accommodate chicken feedings and plant harvesting—you also have to want to do things on your own terms. That’s the switch that Kate MacLean and her husband decided to make when a family member gave them the chance to leave their jobs in San Francisco and oversee her homestead in the French Alps one winter. They accepted, fell in love with the lifestyle, and eventually got their own plot of land in Vermont years later.

“It is a total cliché to say that I was inspired to devote my life to food production after living in France, but I cringe to say it is true,” says MacLean. “Not at all the fancy, highbrow cuisine of Lyon and Paris, but the rural, rugged, dark bread, rabbit-cooked-in-rabbit’s-blood country cooking.”

But it’s not just about having great food—it’s about having great food that you can produce on your own. The appeal of being able to provide for herself is what led North Carolina–based Chantel Johnson to redefine the way she lived her life after tragically losing her brother to gun violence in 2015. “I tried to figure out how to live more self-sufficiently,” she says. “I started with downsizing from my two-bedroom townhouse to a 12-by-12 structure. A lot of the process involved going through and getting rid of clothes and dishes and all the junk that you accumulate. I learned how to garden and how to raise animals.”

It’s easy to assume that these folks—those who eschew what one might consider modern living for a more DIY, back-to-the-earth lifestyle—may also choose to avoid one of the most all-consuming forces of contemporary life: social media. But that’s far from true. “Don’t get me wrong, I still use technology,” Murphy says. “But I also get a lot of joy from growing our own food, cooking meals and eating them by candlelight, making maple syrup, and so on. I find so much satisfaction in getting my hands dirty and doing things myself.”

Homesteaders, like pretty much everyone else, have taken to sharing their lives online—only, the thing is, when you’re sharing photos of your goats and your just-picked acorn squashes, you can expect to garner above-average amounts of intrigue. “I didn’t set out to start a homesteading account. Pardon the pun, but it all happened super-organically,” Deanna T. says. “When I first got on Instagram, I was simply sharing what was going on in our life: photos of our garden and harvests or quirky stories about backyard chicken shenanigans.”

Just as some people use social media to document their reading habits, workout routines, or crafting progress, homesteaders use it to track their farming journeys. “I had started a YouTube channel, and I was posting weekly to monthly updates about how to do certain things, like how to grow blueberries and how to plant garlic,” says Johnson. “They were really crappy videos, but it was my way of documenting things for myself and to see my own growth.”

It Can Also Help You Find Community

“After graduating from college and getting immersed in the real-world ‘adulting’ grind of an 8-to-5, I began to lose touch with my hippie side and other like-minded folks,” Deanna T. says. When she started to share her gardening journey, though, she connected with people who were doing the same. Living in a rural area, as Murphy and MacLean also note, can be lonely—especially if your land puts you at a far distance from neighbors—so having an online support group is crucial.

And it doesn’t just provide emotional support—it also provides plenty of advice. “I moved into permaculture methods because of the inspiration I saw among my community on Instagram,” MacLean says. “I know when to plant potatoes because of the farmers I follow in Vermont, who are much more on top of planting times than I am. I know how to make elderberry syrup and how to use it because of homesteaders I follow.”

And It’s a Platform for Inspiring Others, Too

Apart from the niche community, homesteaders have amassed followers who view their lifestyles from the outside looking in—and it’s with these people in mind that they’ve used their platform to spread a message that providing for yourself, even just a little, isn’t as hard as you might assume. “It started off as something very personal, but it really ended up being an educational thing for others,” says Johnson. “Because I am present on social media and I am available for people to ask me questions, I have been able to inspire and encourage others. What we have to do is make conscious decisions to live a little better and build community with each other. I raise animals for meat. I live in a tiny house, but sometimes I do like to go get Bojangles fries. It’s okay.”

Pastoral images are tempting to put on a pedestal or view as far out of reach, but the thing about this lifestyle is that it takes different shapes and forms for everyone who tries it. That may look like running a full-on farm, as MacLean does; working with a small yard, like Deanna T.; practicing herbalism, as Murphy and Morgan do; raising livestock, like Johnson; or simply nurturing a basil plant on your kitchen counter.

advertisement
**“ I raise animals for meat. I live in a tiny house, but sometimes I do like to go get Bojangles fries. It’s okay.” —Chantel Johnson **

“I found that working with the land heals my body and spirit and shifts my perspectives about consumption, and my hope is that my journey inspires others to embark on their own,” says Morgan. “A homestead can start with one plant, a compost bin, or a small chicken coop in your backyard. It isn’t for a certain type of person. It is for anyone and everyone.”