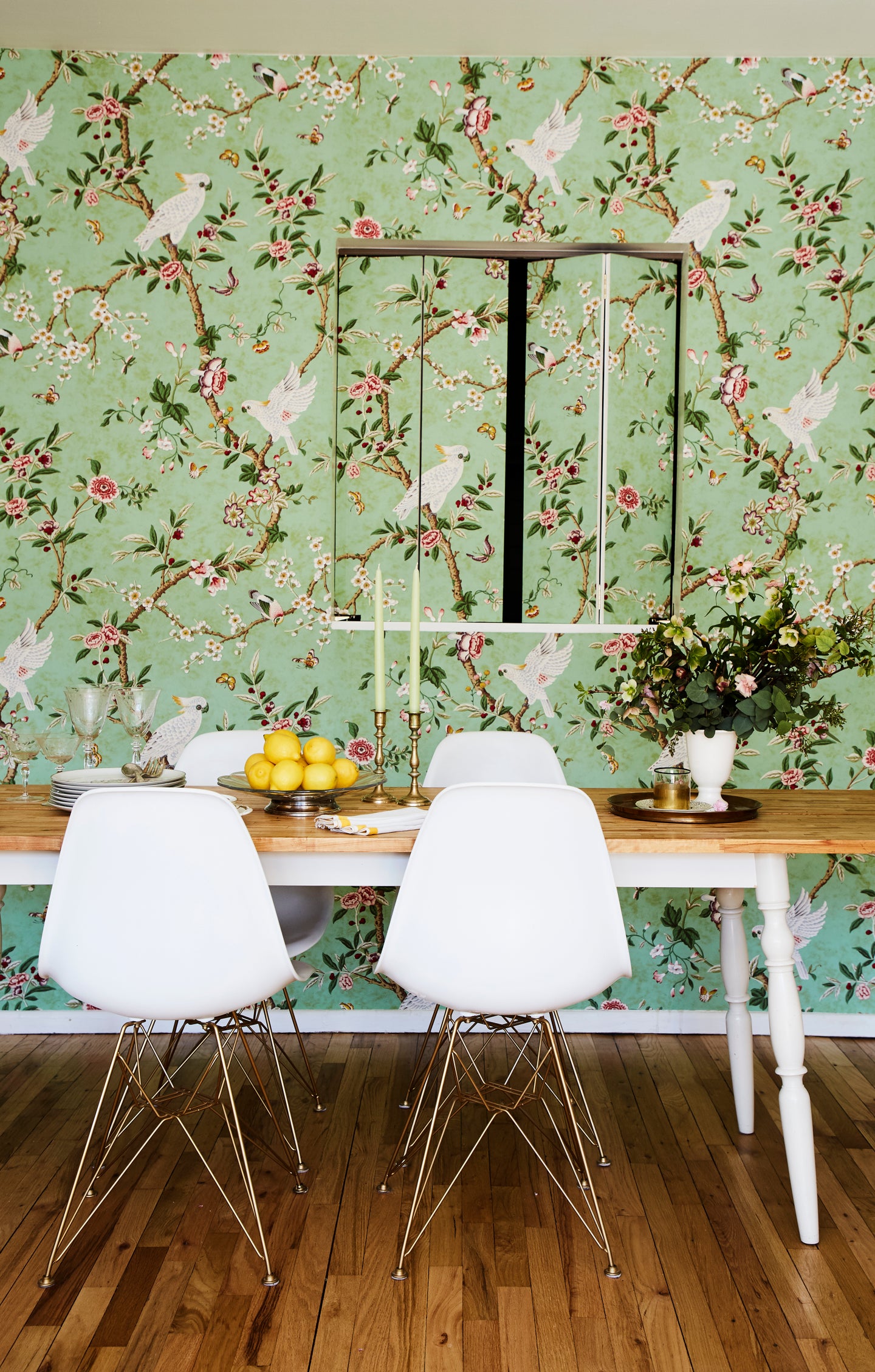 The inspiration for Homepolish designer Marissa Bero’s latest project is highly specific. “I would say eclectic Hollywood Regency with luxe fabrics and finishes, a touch of chinoiserie, and just the right amount of kitsch,” she says, when asked about her reference points for the Upper West Side apartment.

Situated in a 1910 prewar building, the 750-square-foot space was in dire need of an update. It previously belonged to a Broadway lighting designer, who, according to Bero, is rumored to have thrown quite the party during the 50 years he lived there, which might explain why there used to be a disco ball smack in the middle of the entry. That, along with dated track lighting and wall-to-wall carpeting, was the first things to go as Bero updated the space to suit new homeowners Michael and Luca’s more contemporary aesthetic.

The vibrant, borderline-kitschy aesthetic Bero was after was heavily inspired by her clients’ penchant for collecting unique pieces from bygone eras. Retro art prints line the walls, and colorful tchotchkes fill in the empty shelves and surfaces to bring a customized feel to the home.

After a general renovation that provided Bero with a clean palette (including refinishing the hardwood floors and layering in new light fixtures), she got to work bringing in as much color and pattern as possible. There are plenty of standout color moments in this space, from the fun chinoiserie wallpaper accent wall to the deep plum-hued velvet sofa. The blend of old-school elegance with sleek mid-century lines and the odd touch of whimsy is what makes this apartment so appealing.

“I often mix styles and eras when designing, and I find that creating a cohesive look is achieved with a color palette that ties it all together,” says Bero of how she perfects the mixed-and-matched look, noting that repeating styles is another way to facilitate unity in a space. “If I’m including an Art Deco piece of furniture in a space, for example, I’ll be sure to include at least one more in the same room. Some eras also blend really well together—you can have two pieces from different eras that have similar lines, curves, or motifs.”

For Bero, mixing and matching isn’t limited to aesthetics; it also has to do with balance and proportion in a room. To preserve the airiness of the living room—the open floor plan coupled with the massive windows allow for maximum brightness—she stuck with simple white paint and sheer linen drapes. Then, in lieu of saturated walls, she brought in color in smaller ways with an assortment of vibrant throw pillows on the sofa and a bookcase decorated with books and plants in an array of hues.

Her design philosophy carries on into the bedroom, a rich blue-toned space that somehow feels both old-school opulent and contemporary-chic. Working to provide plenty of storage (“Luca, in particular, had a wardrobe that rivaled that of a Hollywood starlet,” jokes the designer), Bero filled the room with a cozy, romantic style.

As for her advice to those worried about diving into a similarly bold style for their own space? “[Don’t] be afraid to do so. The best things in life, in my opinion, always feel a little intimidating at first. You just have to go for it.”