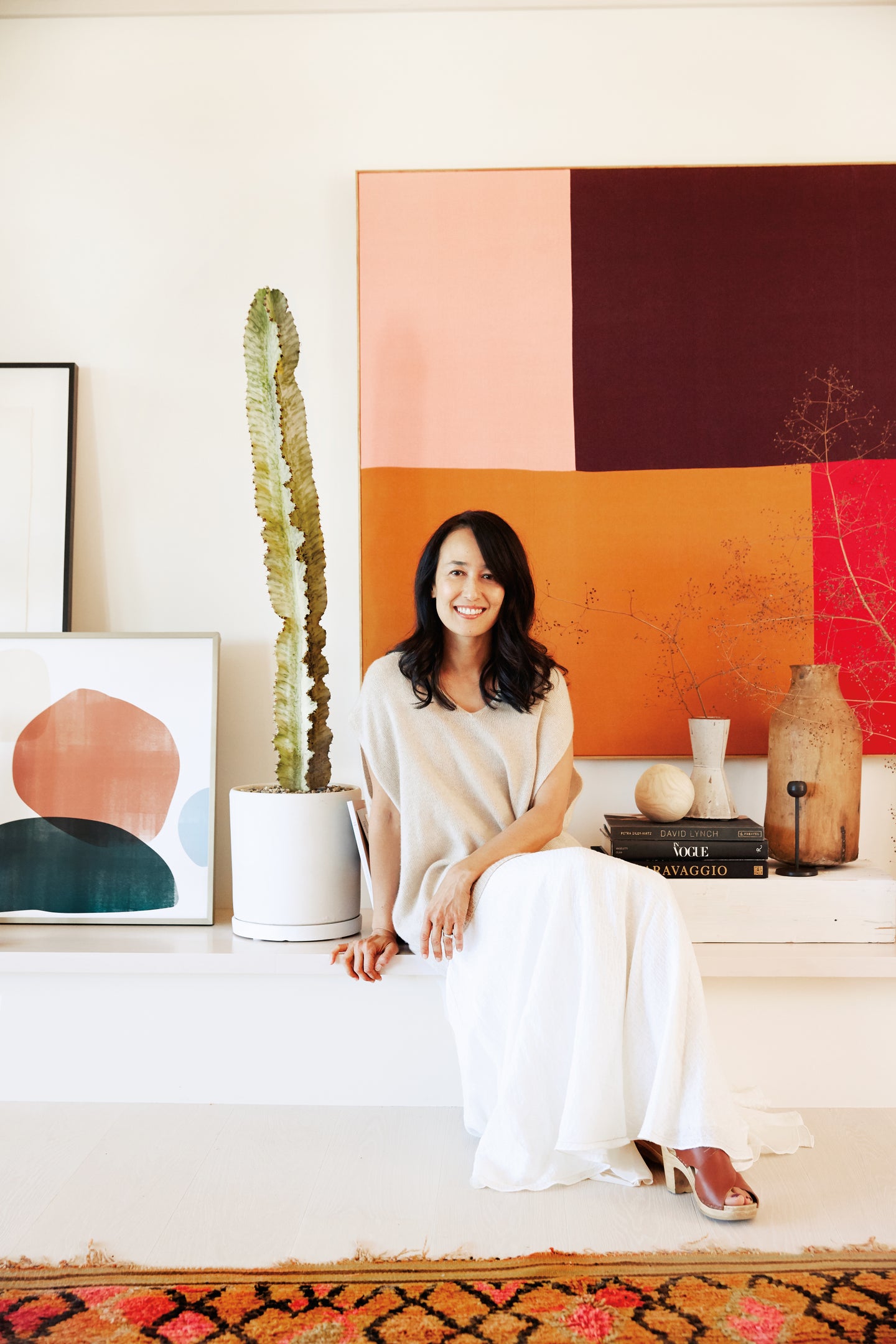 Mariam Naficy, founder and CEO of Minted, has been a dedicated treasure hunter for as long as she can remember. A globe-trotting child who grew up in Africa and the Middle East, she spent countless hours following her mother around souks, bazaars, and all manner of markets. It’s perhaps not surprising, then, that she ended up founding Minted—the hugely successful online marketplace for artists and designers—or that her Napa Valley weekend retreat, which she shares with her husband and two children, is full of unique pieces gathered from all over the world. “A lot of the things in my house are collected from Tanzania, Morocco, and Sweden,” says the San Francisco–based Naficy. “I love going to the Paris flea markets, and I recently found a great store in Tanzania filled with antique African sculptures.”

When Naficy purchased her home in 2011, it was a standard suburban ranch on six acres of forested land overlooking a ravine. She enlisted the help of designer Maca Huneeus to transform the nondescript structure into a neutral, Scandinavian-influenced backdrop for her colorful trove of art and antiques. With a warm-minimalist aesthetic in mind, they vaulted the ceilings, opened up the layout, and introduced a palette of white walls and pale wood floors.

Salvaged architectural details and well-worn vintage textiles cozy things up: Beams are 18th-century barnwood from Vermont and Maine, and many of the doors are repurposed, with one dating back to the 17th century. In the den, an ottoman is upholstered with a North African carpet, while vintage Moroccan rugs add color and warmth throughout the house. “Very old materials bring that patina and character that you can’t easily get with new things,” says Naficy, whose collection of hand-thrown ceramics fills display shelves and peppers many surfaces.

With art, as with furnishings, Naficy is all about the mix. In the living room, a screen print from Robert Motherwell’s Africa Suite—a series of bold black-and-white images—leans on a gallery ledge next to an antique Tanzanian sculpture. Nearby, a grouping of contemporary works from Minted includes abstract prints alongside figurative photography. From the art to the upholstery and pillows, a palette of ochre, rust, and wine “reminds me of my 1970s childhood,” Naficy says.

Throughout the house, there are also calm, almost minimalist nooks intended to rest the eyes. “My office is my favorite space,” says Naficy of her personal haven, which contains only a worktable, stool, and shelves, all in neutral hues. “To have almost nothing in there is such a relief.”

That need for a moment of zen is understandable: Her weekday schedule is filled with travel, endless meetings, and the demands of parenthood. More than anything, she says, the Calistoga getaway represents an opportunity to reconnect and relax.

The family spends time between the vegetable garden, the pool, and the deck, reading, listening to music, and cooking. Naficy’s in-laws often make the trek south from Seattle for birthdays and other celebrations. “The house is a cocoon of warmth, inside and out,” she says.

It’s also a place to experiment with art, adding and subtracting pieces from the mix and considering the ways that Minted might evolve. “We’re moving toward the idea of fine art that’s more of a statement,” Naficy says.

Case in point: the wall mural that hangs in her bedroom, which was done by Minted artist Patricia Vargas of Parima Studio. “A lot of people don’t know that you can also commission originals through Minted,” says Naficy. In her home, as in her life, art is the gravitational center. “The house has big rooms,” she says. “I could have filled the space with huge furniture, but it was so much more interesting to focus on the art.”

Art collecting, according to Naficy, shouldn’t be bound by rules. “It’s about falling in love with a piece and having something that you care about,” she says. But when it comes to displaying your treasures, there are certain maxims to consider. Here, she outlines her strategy.

The works in any given space needn’t be all maximalist or all minimalist. In fact, it’s the juxtaposition of the two that brings a room to life. Says Naficy: “Figure out where you want to make a statement versus where you want to be quiet.”

Your home isn’t a museum, so resist the urge to put everything behind glass. Leaving an oil painting or textile unframed “lets the rawness in the texture come through,” notes Naficy.

Gallery walls are nice, but sometimes less is more. “I like to look for places where I can put just one small piece on the wall instead of maxing out the art,” says Naficy. “It brings a special kind of serenity.”

“I love art shelves, because that way you’re not beholden to an arrangement,” explains Naficy, who offers a wide variety of display ledges on Minted. “I want the flexibility to move things in and out of rotation.”

Beware of things that go bump in the night. “I don’t like the idea of art hanging above the bed in earthquake territory,” says Naficy. Rather than leave the space unadorned, she turns to murals, either papered or painted directly on the wall.

This story originally appeared in the Winter 2018 issue of Domino, titled “Calm, Cool & Collected.” Subscribe to be the first to receive each issue!