The over-the-top shoe wall is now a guest bed nook.

By
Olivia Lidbury
photography by
Hugo May 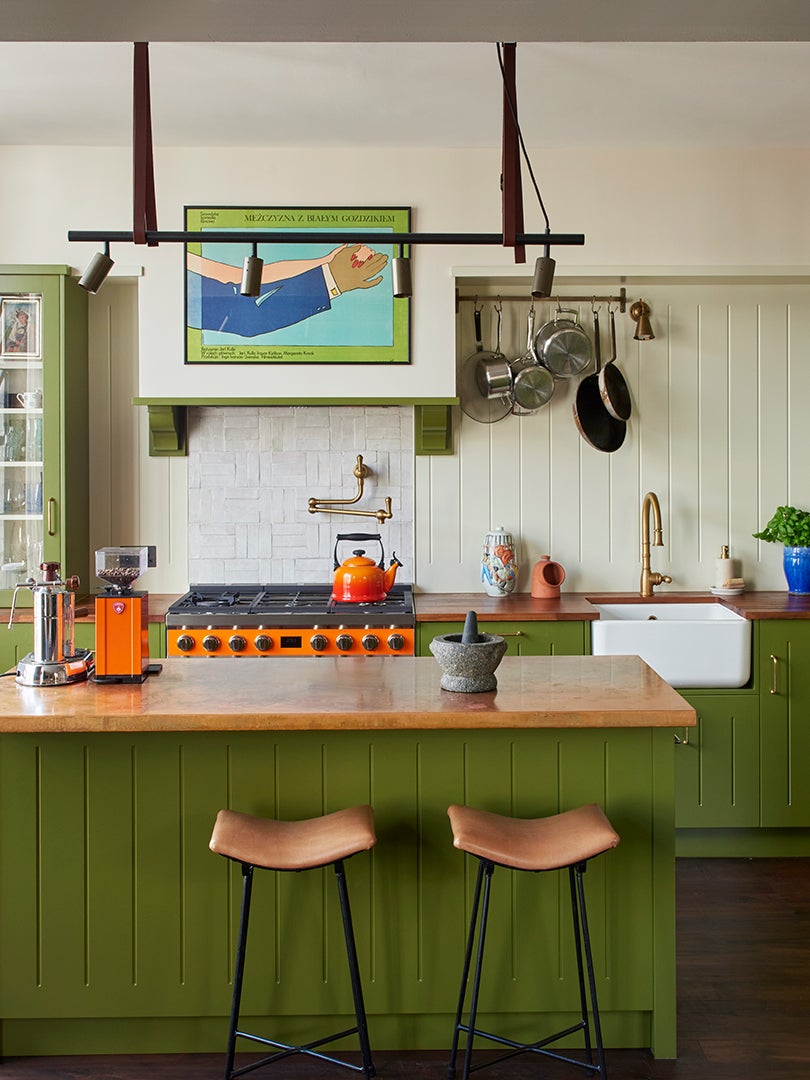 It’s not wildly far-fetched to say that Nikki Lindman, a creative director in advertising, manifested her current home in central London. Having spent 20 years studying, working, and living nearby, she would often pass by this block of warehouse apartments, thinking: One day I will have a flat in this building. Fast-forward to the eve of 2020, just as her divorce was all tied up, and Lindman got her set of keys.

The appeal of the exposed brick and huge industrial windows of the former tannery (leather was still being dyed in the space up until two decades ago) was undeniable, but Lindman still had to use her imagination to see past the existing bachelor pad–style decor. “There was a lot of white leather and frosted glass cube tiles,” she recalls. “I’d met the owner, who admitted he’d bought it as an investment—and you could tell; it had no warmth about it whatsoever.”

Lindman resisted attacking the interiors right away, preferring to gain an understanding of the space by first living in it for a few months. During that time, she turned to Instagram to find the right interior designers for the job, landing on James and Saskia of Howark Design, whose brief was to restore the dignity of the building and reconfigure the rooms. Here’s how they collaborated to bring the formerly blingy apartment back to life with surprising and charming touches at every turn.

Bring the Kitchen Out of the Shadows

Lindman and her partner are avid cooks, so the tiny kitchen, which had been boxed in next to the bathroom, had to be repositioned. The solution was to bring it out into the main living area, which flows into the sitting room. An island was top of Lindman’s list; the copper surface nods to the building’s industrial past life and acts as a “visitors book” for every guest who stops by. “Dinners are eaten there and drinks are served there, and all the uses are marked on the patina of the copper, which makes it even more special,” says Lindman. James and Saskia suggested olive green for the kitchen cabinets, which pops against the bright orange Smeg Portofino oven. “I love the use of colors; they’re impactful without being overbearing,” says Lindman.

A self-confessed magpie, Lindman already had a healthy stash of homewares, knickknacks, and artwork sourced from around the world to furnish the space, which James and Saskia happily incorporated. Lindman’s mother has gifted her antique rugs from Afghanistan, Iran, and Turkey through significant moments of her life, and they have all found a home within the apartment, such as under the Matthew Hilton dining table.

“That’s my practical splurge. I bought it with the hopes it would be used, abused, and loved in equal measure” says Lindman.

Carve Out a Flex Guest Area

The former owner’s expansive shoe collection was housed in a triple-height mezzanine area with a bed precariously accessed by a ladder. “I don’t know how anyone would want to sleep up there and negotiate climbing down,” says Lindman, laughing. She asked James and Saskia to make better sense of the space, but given it’s just herself and her partner living in the apartment, not solely relegate it to function as a second bedroom.

Their solution was to swap the midlevel shelving for a daybed, bolstered with an ikat print headboard. The setup is actually a trundle that pulls out into a plush double (Lindman’s mom slept on it for three weeks and gave it a thumbs-up). Up on the mezzanine level is storage, while the steps lead down to a cozy study.

The former kitchen was knocked through to the existing bathroom, creating one large space that now accommodates Lindman’s desire for a shower and a bath. Unsurprisingly, the flock wallpaper and chrome fittings had to go, with James and Saskia embracing more traditional elements, such as wood paneling to hide the pipework (painted in Farrow & Ball’s Arsenic) and a roll-top tub in cherry red.

“I have a bath every night now; it’s very naughty and indulgent, but it’s so tranquil in here,” says their delighted client. Lindman hopes to still call this place home when she’s 80 years old: “I still have pinch-me moments. It’s a real woman’s apartment; it’s my absolute bachelorette pad, but with a partner!”