How a Dull Brown NYC Apartment Became a Colorful Oasis 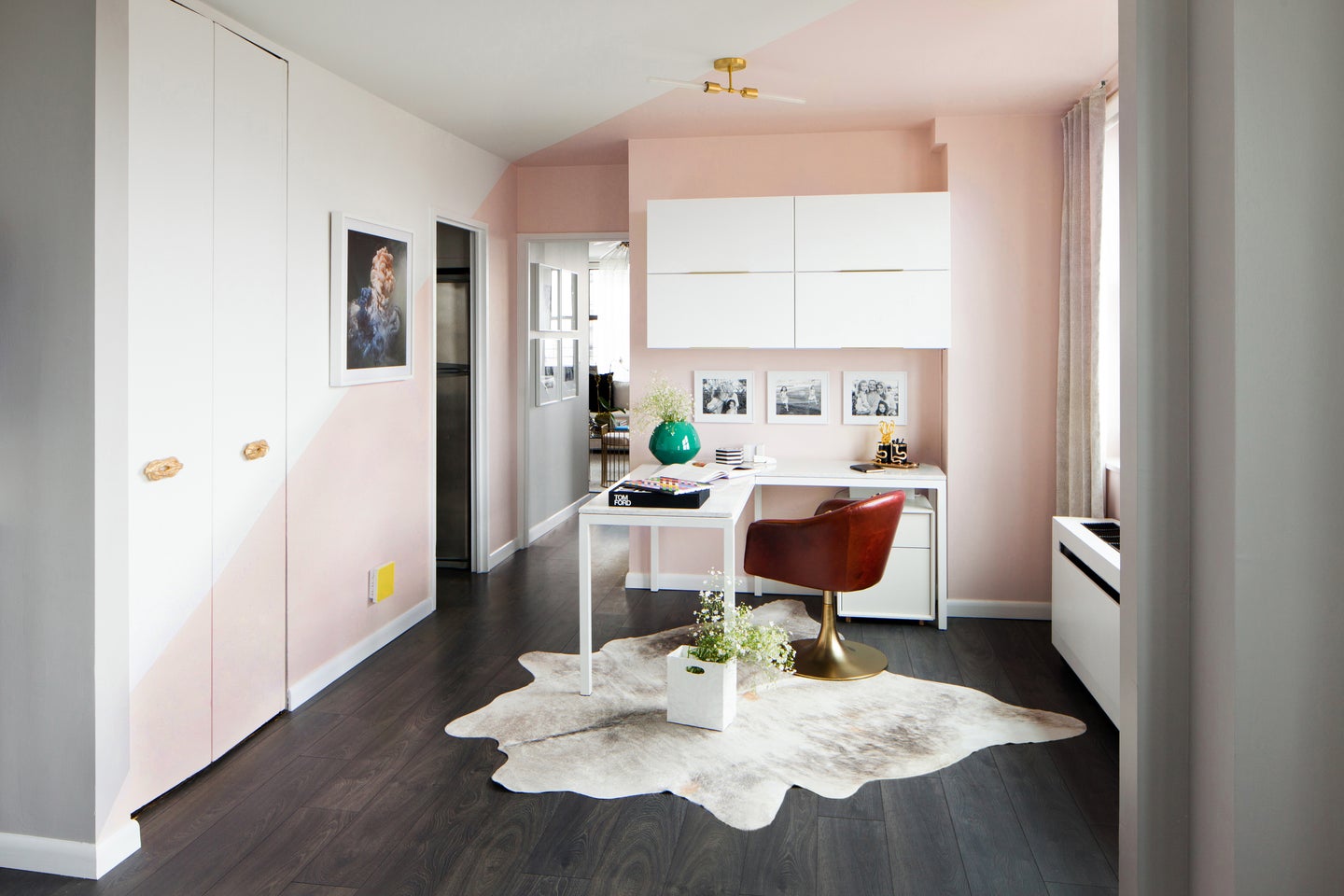 It’s not often that an office is the focal point of a home, but such was the case in this Manhattan abode designed by Diana Mui of D.M.teriors, Inc. The Upper East Side spot is home to a creative fashion buyer who has a serious penchant for the whimsical and colorfully bold—traits that immediately became the hallmarks of the home’s redesign.

Upon first seeing the space, Mui was thrown when she discovered the immense disconnect between her client and the original state of the home. “I was blown away by her vibrant personality and charisma. I noticed an extremely colorful, funny, hip New York City mother of two, who was just so full of life,” Mui recalls. “On the contrary, walking into her home was the biggest shock. It was a sea of dull brown and beige finishes.”

Brown parquet flooring dulled down the ambiance of the apartment, a detail made worse by the sea of beige and brown furnishings. Mui quickly realized she would have to design a space that would capture the essence of the family and their lively demeanor—“I was surprised how a woman as vibrant as herself could live in a space as lifeless as her apartment.” And here is where the decorative journey began.

The distinct layout of the apartment proved to be somewhat of a challenge for Mui. “We had to make sure that each room/space had its own individuality but also meshed with the one next to it and pulled the space together,” she notes, singling out the study as a particularly difficult area to navigate.

The makeshift home office was situated in the middle of the home, in a hallway between the dining room/kitchen area and the living room. Mui’s goal was to instill the zone with a sense of privacy, all the while establishing a seamless transition between the aforementioned areas of the home.

In an effort to visually distinguish the study, Mui utilized a pointed paint detail in the form of a pink accent wall, which resulted in what she describes as a transitional moment. While this helped visually isolate the home office from its surroundings, it still managed to remain engaged with the decorative direction established throughout.

With the living room being another one of the major sore spots of the home, Mui was keen on redefining the space with a saturated dose of color. By sticking to a neutral backdrop, she was able to introduce an array of muted pastels sans overwhelming the room with a mosh pit of color. The result was an unexpectedly subdued scheme that still maintained an element of whimsy and charm, emulating the family’s striking personality.

While Mui found herself having to downplay her client’s eccentrically colorful taste, there were a handful of moments in the home where the designer let loose—the jewel-toned, velvet sofa in the living room being a prime example. Set against the cool-gray wallpaper, the piece stood in as the undeniable focal point of the room, reigned in by the matching throw pillows and wall art.

“Every room had a unique palette, which melted with the rest of the space to create a soft transition,” Mui says. “Artwork around the house was used to pull in all colors and decorative features together that reflected Jennifer’s personal style.”

The decorative aesthetic of the dining room followed suit, where a pared-down backdrop provided myriad opportunities for textural layers and eye-catching splashes of color that inspired a calming and serene touch of visual interest.

“I really wanted to gravitate toward her personality and find mutual ground where it’s comfortable enough for her husband and her family,” says Mui of the home. One look throughout and it’s apparent that she managed to do just that.