We Asked 20 Women About Their Secret Single Behavior

And it was extremely enlightening. 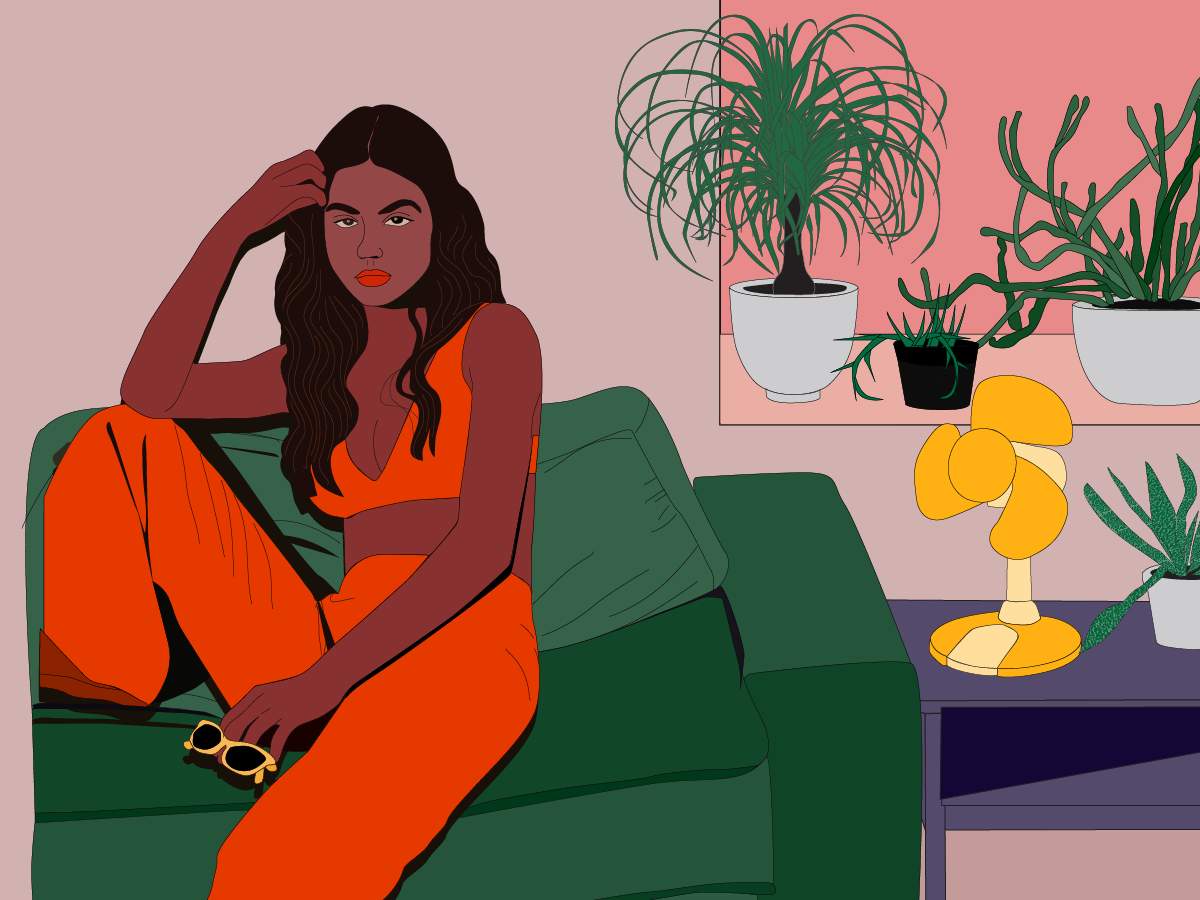 There are a lot of perks to living alone. You only have to wash one plate at a time. No one bats an eye at an imposing pile of laundry in the bedroom. And you can eat the entire pint of ice cream in your favorite college sweatpants. Or without any pants on at all. Living alone can be glorious.

Enter the secret single behavior, a term first coined on Sex and the City as we all watched in solidarity as Carrie ate her stack of jelly saltines and Miranda watched her infomercials. Finally, there was a definition of that one cringe-worthy thing we can only do in private. And the thought of someone walking in on it? Shameful.

I should know because it happened to me.

Before my husband and I officially shacked up, we dated long distance for years, where I always had ample time to get my apartment in order before he made his scheduled appearance. Even when we finally did move in together, work often kept us apart and I still had many weekends in our abode all to myself. This gave me time to engage in my SSB: making friendship bracelets while watching gangster movies.

I remember being right in the middle of a particularly grueling fishtail pattern, just as Tony Montana and his friend were being threatened with a chainsaw when I heard a key turn in the door.

What transpired next was a slow-motion tumble off the couch to hide my bin of embroidery floss, but it was too late. My now-husband looked to the TV and then to my pile of camp crafts on the coffee table. What was once a private ritual became more of a bizarre realization that yes, he was dating a woman who liked to engage in childhood crafts to the sound of people being tortured.

I’ve since given up my SSB in favor of some easier-to-hide practices, like using a razor to take the fuzz off our couch or watching a British cop show while I bleach my upper lip.

It doesn’t matter if you live with your parents, several roommates or your significant other. When you’ve got the place to yourself, you’re undoubtedly engaging in some secret behavior.

My scarring Scarface memory got me thinking: What else are women out there hiding? In the spirit of solidarity, we turned to a few women to see what they had to say. Take a look.

“Normally when it’s warm out, I don’t like to sleep under my top sheet but instead, between that and my duvet. Sometimes, when it’s time to wash my bedding (but I don’t feel like doing laundry), I only strip the top sheet and then will sleep on top of the fitted one– it allows me to prolong running the wash just a little bit longer.”

“Sometimes I shower with the door wide open. My bathroom is right next to my living room and if I’m watching a good show or movie that I don’t want to pause, I’ll turn up the volume and listen while I wash my hair.”

“I’ve found that I use the weirdest surfaces as tables when I don’t feel like sitting down to eat in a typical way. My laptop case, radiator, living room speaker, and the back of my toilet are just a few of the random places I’ve put my meal down for convenience.”

“I don’t have any coasters in my apartment but instead, always use the same book on my coffee table to put my drink down on. It’s stained with so many rings, it looks like a flattened slinky. The first thing I do when guests come over is flip it over!”

“Sometimes when I don’t have plans for a Saturday, I’ll spend the morning at the farmers market picking out ingredients for a fancy cocktail.  When I get home I’ll make it and have it with my lunch, like a Spiced Peach Old-Fashioned or a Plum Gin Smash.”

“Once during my apartment renovation, the delivery guy forgot to include plastic utensils with my dinner. All of mine were packed away, but rather than walk across the street to Duane Reade to pick up plastic forks, I used the accompanying loaf of bread as a vehicle for my penne.”

advertisement
“I don’t have any coasters in my apartment but instead, always use the same book on my coffee table to put my drink down on. It’s stained with so many rings, it looks like a flattened slinky.”

“If I’m eating a particularly messy meal like spaghetti, sometimes I’ll cover my dinner plate with a Ziploc bag so that when I’m done, I just have to throw it away and don’t have to wash the dish. I know it’s wasteful, but I really hate doing dishes.”

“I like to eat macaroni salad for dinner. As in just macaroni with a giant pile of mayo. My partner is a health nut and would be so grossed out if he witnessed it.”

“I work from home so normally when our sitter arrives, I’m actually working. But sometimes I run out of the house ‘for a work meeting’ when in reality I’m at the mall getting a free makeover at the Bobbi Brown counter. And then I treat myself to Chipotle looking real fleek. The sad part is that I always remove all the makeup with a wipe in the car before I go back inside. I can’t have her finding out what I’m actually doing!”

“I like to watch Great British Bake-Off and bake myself brownies out of a box and pretend I’ve just concocted something super fancy.”

“Sometimes I run out of the house ‘for a work meeting’ when in reality I’m at the mall getting a free makeover at the Bobbi Brown counter.”
advertisement

“When I sleep alone, I like to fall asleep listening to Fresh Air. Something about Terry Gross’s voice soothes me into a deep, deep slumber.”

“On my days off, I may never change out of my comfy clothes, and if I have to run a quick errand, I just throw on an extra top layer to avoid putting on a bra.”

“If I’m in the middle of a really good show, I’ll drag a side table and laptop into the bathroom with me while I sit on the toilet.”
advertisement

“I am obsessed with cleaning. Like, put on yellow gloves Dexter-level obsessed. I won’t change out of my pajamas until the entire house is clean, which usually takes me all day. Then when I finally shower and get dressed, I’m starving but too afraid to mess up the kitchen. So I generally just pour myself some wine after not eating all day and fall asleep drunk on the couch.”

“If I’m in the middle of a really good show, I’ll drag a side table and laptop into the bathroom with me while I sit on the toilet. I keep it in the doorway so it’s not too close, which somehow makes the practice feels less gross.”

“I love cleaning out my fridge and organizing it while listening to a musical soundtrack, most recently Hamilton. I know some people sing in the shower but I sing while I organize cans.”

advertisement
“When I sleep alone, I like to fall asleep listening to _Fresh Air_. Something about Terry Gross’s voice soothes me into a deep, deep slumber.”

“I take videos of myself unloading my haul from Target and pretend I’m a YouTube star. Do I ever upload these? No. Do I watch them and critique my own on-camera presence? Of course, I do. If someone ever accidentally saw one of these videos, would I die? 100%.”

“My vacuum broke many moons ago so right now there’s probably an inch of dust that has literally been swept under the rug. If anyone were to lift it up they’d be horrified.”

“This is truly shameful. I really wish I was handier so I’ll occasionally make up a fake reason as to why I need the super to visit my apartment. Once he’s there I’ll pretend to be in the middle of a project, say hanging a piece of art, and ask him for his help. He’s the nicest guy and always does. I could just hire someone to help do these things but technically I’m paying for it with my rent…right?”

advertisement
“I’ll occasionally make up a fake reason as to why I need the super to visit my apartment. Once he’s there I’ll pretend to be in the middle of a project, say hanging a piece of art, and ask him for his help.”

“I have a white sofa and I flip my cushions over to the ‘clean side’ whenever I have company. None are wiser to the fact that the underside of the cushions is more gray than white.”

“Last fall, while on a weekend trip upstate, I found the most beautiful vintage rug for my living room– it has the perfect mix of neutrals and pale pastels weaved throughout that match my decor to a tee. Unfortunately, my overeager puppy did not hold the rug in the same high regard and ended up creating a massive stain on one side that is impossible to get out. I know I should have probably thrown it away but instead, I rotated it and redesigned the room layout so it’s completely hidden.”

Can You Guess the Most Popular US City for Single Women?

How to Prep for Pregnancy, Even When You’re Single AF

A Modern Matchmaker Solves All Our Dating Dilemmas