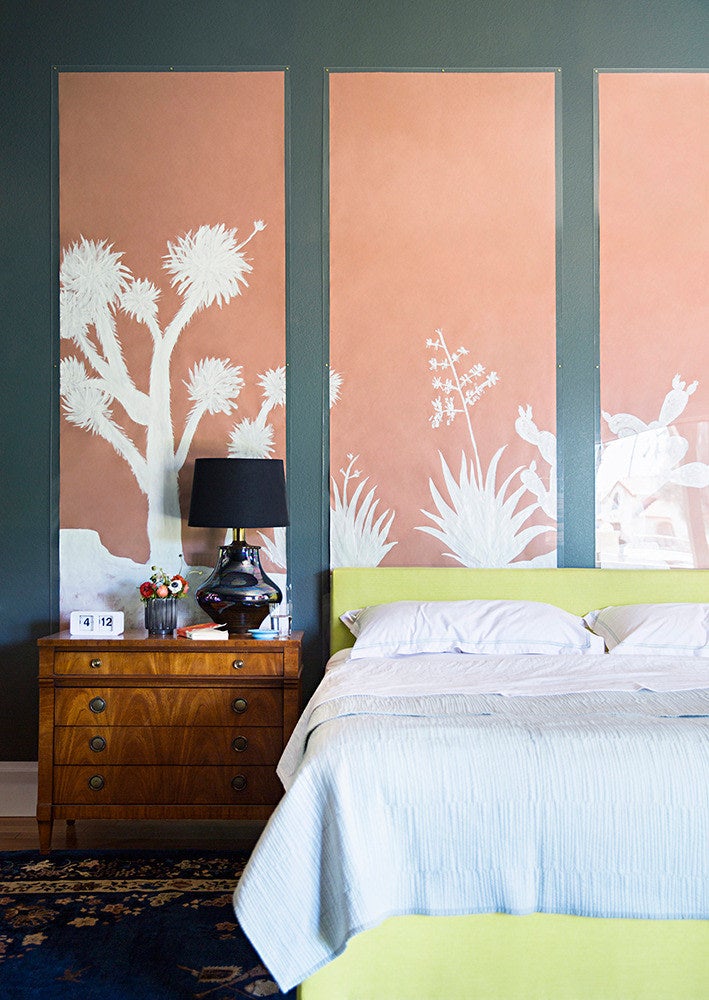 After years of cramped east coast living, Jenny Komenda returned to her hometown in Phoenix, Arizona to design a Southwest-inspired space all her own. “We’d been renting in big, hectic cities for years,” says Komenda, who founded Juniper Home and the previous, beloved Little Green Notebook. “We were ready to be near our families in a place that felt like home,” she says. After shopping around, they discovered a 1970s Cape Cod-style house filled with a riotous blend of architectural influences, including rustic Tuscan details, Victorian millwork, and highly-textured walls. When it came to the design of her home, Komenda blended an eclectic mix of artwork, clever DIYs, and even a desert-inspired color scheme. Take a peek inside her home makeover that’s anything but ordinary.

For starters, the Komendas removed incongruous design elements, expanded passageways, renovated the kitchen, and even ripped out the old floors. “It’s the first time I’ve owned a house in almost ten years,” the designer explains. “So I was thrilled to be starting over from scratch in such a hands-on manner.”

In her bedroom, Komenda painted the romantic desert scenes herself on kraft paper and secured them to the walls with plexiglass sheets.

Vibrant art and patterned rugs infuse the playroom with creative energy. The mishmash mix of furniture and rugs allows for a playfulness perfect for a kid’s room.

Throughout her new residence, Komenda sought to combine her eclectic tastes with an aesthetic suitable to the Arizona scenery. “I love pulling ideas from all varieties of styles,” she says. “But I still wanted the house to feel like it was in the Southwest.”

To create an appropriate color palette, she drew hues from the surrounding desert landscape—dusty mauves, purples, and even a pale green inspired by the morning sky. “It’s all about finding an equilibrium by mixing cool and warm tones,” Komenda explains. “It satisfies the eye to find that balance, and it makes an interior so much more exciting.”

Linus, the family’s standard poodle, stands guard in the entryway.

A claw-foot tub found on Craiglist adds vintage charm to the guest room bathroom. The green walls combined with the dark black tub create contrast and a calming oasis.

To achieve the appearance of soapstone countertops, Komenda covered sheets of plywood with a concrete mixture that she stained black.

Adding interest to the back porch’s tired concrete floors, Komenda painted a tumbling block pattern. Head over to her website, formerly called Little Green Notebook, to see more images of her home and DIY projects.