All Your Questions About Le Creuset Answered

Everything to know about the famed French cookware brand. 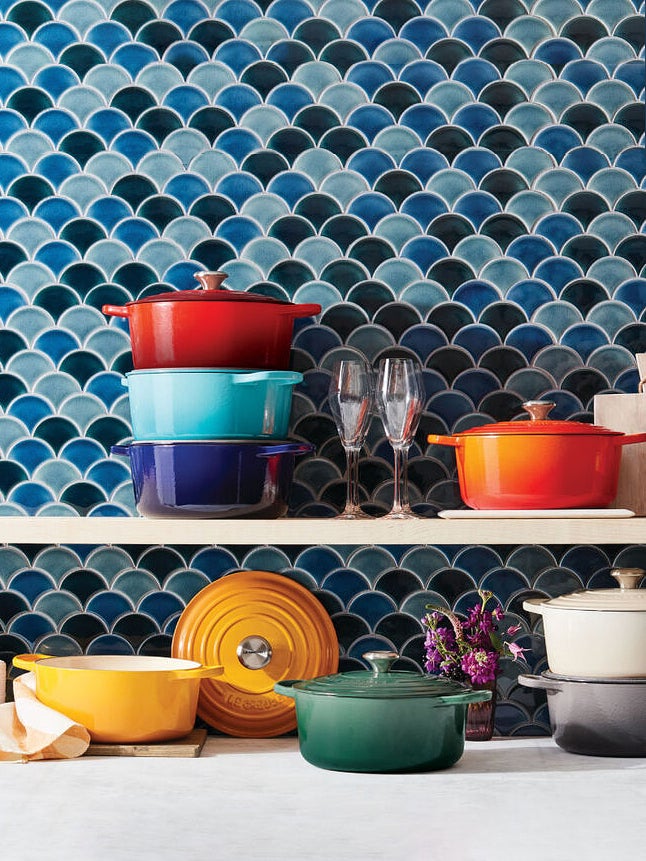 While you may think yourself indifferent when it comes to the tools you use in the kitchen, talk to a Le Creuset superfan who collects—nay, worships—the premium French kitchenware brand, and you’ll hear a different story. Famed for its colorful cast-iron collections that seemingly defy the test of time, Le Creuset’s iconic pieces have long been considered essential since the company’s humble beginnings in 1925.

Over the years, the brand has continued to win over the hearts and taste buds of proud foodies and has even been known to grace the kitchens of celebrity chefs and A-list collectors (Julia Child and Marilyn Monroe were both big fans). “In France, everyone has cast-iron pieces that have been in their families for years,” says acclaimed New York City–based chef Gabriel Kreuther. “It’s your grandmother’s favorite, and then it gets passed down for generations.” Despite Le Creuset earning a cultlike following, we still couldn’t help but ask, Why is it the best? Are the pricey Dutch ovens (from $130) worth it? How long will they actually last?

To get to the bottom of your pressing questions (and ours, too) we asked chefs and everyday users what it’s really like to cook with these products. Consider this your definitive guide to all things Le Creuset.

So what’s the story?

While today the brand is celebrated world over, Le Creuset (pronounced luh croo-zay) was born in response to a culinary revolution led by renowned chef Auguste Escoffier that hit the country during the 1920s. With boeuf bourguignon and coq au vin top of mind, casting expert Armand Desaegher and Octave Aubecq, a Belgian enameling specialist, teamed up in 1925 to produce what would be Le Creuset’s first enameled cocotte—set in the brand’s now-iconic fiery orange-colored glaze: Flame. While the intense hue (which also goes by the name Volcanique) is still the company’s most popular color option, Le Creuset has since expanded its palette and product offerings.

Today, 91 years later, the company boasts an array of enameled cast-iron cookware, stoneware, stainless steel, and silicone collections that come in a rainbow of colors and finishes—from millennial pink to ultraviolet. In addition to its beloved cookware essentials (like the Dutch ovens, braisers, and saucepans), Le Creuset also sells just about everything else you’d need to fill an empty kitchen, including tabletop goods, bakeware, cutlery, and other prep tools.

How are the cast-iron products made?

All Le Creuset cast-iron cookware is crafted and thoroughly examined at the company’s original location in Fresnoy-le-Grand, France. There, each item is cast in individual black sand molds that are then destroyed and recycled after use (no two items are alike). The cast pieces are then smoothed and refined by in-house artisans before they enter the enameling line, where a number of colorful enamel layers are applied. At least 15 pairs of hands touch and inspect every single piece of Le Creuset cookware before it hits the shelves.

What are the cooking advantages?

Unlike most brand-name pots and pans that can scratch or deteriorate over time, Le Creuset products are generally more forgiving. Thanks to the enamel glaze exterior, its strong vessels retain (and distribute) heat extremely well—and are pretty much guaranteed to last a lifetime. “The heavy bottom of the pot disperses heat very well, and the durability factor is a plus. Not to mention, it looks great on the stovetop,” says John Fraser, the chef and restaurateur behind the Loyal in Manhattan.

You get a nice even heat that is perfect for searing meat and developing golden brown caramelization, which you need for flavor, explains Melia Marden, chef and co-owner of the Smile and Smile to Go: “I don’t want a lot of pots and pans taking up space, so I like to be able to use them for everything—from boiling water to braising stews.”

“Sheer weight,” says Kreuther. “Even when cooking professionally, you have to be careful of the combined weight of the pot and your dish.” Their bulky, heavy bodies make it more difficult to move about the kitchen and carry your food with ease. Adds Marden: “You have to be a little careful when moving them around and cleaning them!”

Is it worth the splurge?

“It absolutely is!” says longtime Le Creuset user Lahaina, who can’t live without the brand’s signature skillet. “I use mine every single day on my stovetop for cooking eggs or stir-fry. I get the majority of my cooking done with just this one pan.”

While deal hunters may not be thrilled about the pretty cookware’s steep price tags, Le Creuset proves to be a wise choice for aspiring chefs interested in building a solid cookware collection that will stand the test of time. For some, having an everyday pan that’s simply indestructible and totally reliable is a major plus. But for others, the tradition of collecting and the time spent cooking with loved ones is reason alone to put their wallet out on a limb. “I believe it’s worth the splurge for the cast iron and the memories you create with your family around it,” says Kreuther. “The pieces become part of your family and you come to love them.”

What should I buy?

Historically, Le Creuset has been known for its enameled Dutch ovens, as well as its braisers, saucepans, and skillets. But when it comes to building a collection, it all depends on what you like to cook and how you like to cook. We have you covered.

For the master cook:

The 15 ½-quart Goose Pot is the largest Dutch oven the company manufactures, and it’s a showstopper for a big dinner party meal.

“My favorite is the Large Braiser,” Fraser tells Domino. “I’ve had it forever! It’s great for large pieces of meat and hearty vegetables.”

For Marden, the 3.5-quart Braiser in particular is the most versatile option. “I would say I cook about 90 percent of all my dinners at home in this pan,” she says. “It is wide enough and has enough surface area that you can use it for sautéing vegetables or searing meat, but it’s also deep enough that you can make saucy dishes or stews in it.”

For the baking fiend:

You might want to start with the Heritage Rectangular Casserole or a set of Mini Cocottes—both of which boast a sleek, nonstick glazed interior to make cleanup that much easier.

The 3 ½-quart Braiser (often called a “do everything” pot in France) or 11-inch Nonstick Fry Pan are two good places to start. And, of course, you can’t go wrong with the classic round and oval Dutch ovens.

“I like the cast-iron line specifically, and my favorites are the round and oval Dutch ovens and small saucepans with a handle,” Kreuther tells Domino. “I got my first piece, a round Dutch oven, about 16 years ago and have added two or three other pieces since then.”

For the shopper on a budget:

Consider snagging the 8-quart Enamel on Steel Stockpot (only $95). Or if you’re not into the whole cooking thing but still want your stovetop to look fresh, the Classic Whistling Kettle.

Where can I buy Le Creuset?

Le Creuset is available directly through lecreuset.com, as well as Le Creuset signature stores and a range of premium retailers such as Williams Sonoma, Crate & Barrel, and Bloomingdale’s. Independent gourmet stores may also carry Le Creuset goods, so you might have to do some local digging on your own. For those on a budget, consider heading to a Le Creuset outlet—the brand has a number of locations across the country.

How do I take care of my cast iron?

While Le Creuset breaks down how to clean and care for all of its products on its site (find detailed instructions here), simple rules, like avoiding the use of metal utensils or metallic pads and not storing products while still damp, are useful tips to keep in mind if you want any of the enameled cast-iron products to last as long as possible. Afraid you might smash a lid or crack your pot? The brand offers different warranties depending on the type of product. Find out if your item is covered here.

And the consensus is…

While we aren’t saying you should give up on your go-to cookware brands or that your food will suddenly taste better if you start cooking with Le Creuset, we have to note that the famed French company is revered for good reason. Feel like adding one small piece to your kitchen? You’re guaranteed to have it for years to come. Seriously considering becoming a dedicated collector? You’ll come to value the pieces not only for their longevity or joyful hues, but also for the memories, traditions, and dishes they inspire.

This story was originally published in August 2018. It has since been updated.