The Most High Design Spa Actually Exists on a Cruise Ship

From a crystalarium healing room to a floating zen room, it’ll blow your mind. 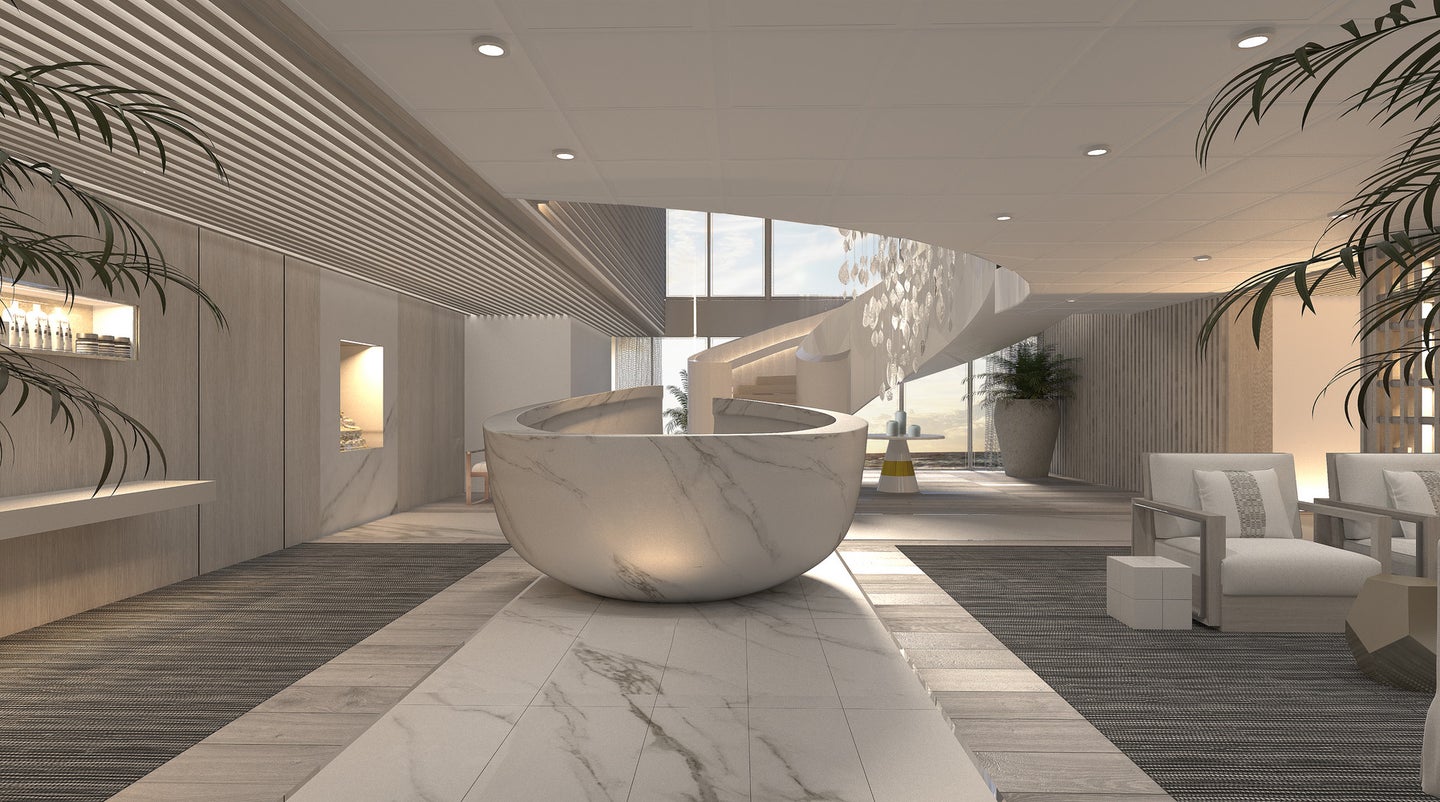 A rendering of the spa entrance with a jaw-dropping marble desk. . Courtesy of Celebrity Cruises

If the idea of being stuck on a giant piece of floating metal for days, or weeks, gives you visions of jumping overboard, allow me to introduce you to one ship in particular that’ll genuinely make you reconsider your life aquatic. The Edge, by Celebrity Cruises, is being currently completed, and with its maiden voyage come November, you could board a ship that will give you access to some seriously impressive design and a next-level spa (not to mention four restaurants helmed by a Michelin-starred chef and world-class entertainment).

The caliber of creatives bringing the ship to life is what sets it apart: Spanish designer and architect Patricia Urquiola (aka the “designer of the decade“) is responsible for the Edge’s entertainment area—her modern furniture will be featured around the ship, too—and the Edge recently revealed that celebrity interior designer, Kelly Hoppen MBE (that’s Member of the Order of the British Empire, thankyouverymuch), will be designing the spa, which is worthy of hopping on a ship for a week to experience in and of itself.

Rendered in Hoppen’s preferred calming color schemes with an East-meets-West bent, each moment of the 22,000-square-foot space is meant to exude zen with a, as Hoppen describes it, “global infusion.”

She sets the tone from the start: A spiral staircase leads to a sculptural, raw marble desk that looks like an oversized tub. The space is layered with different stones and woods, showcasing Hoppen’s talent with taupe and textures to create “a space where you felt like you could actually breathe” she said at a press event in London.

She designed every aspect of the spa, from the 23 treatment rooms and the eight speciality healing rooms, to the “humongous” amethyst in the crystalarium healing room and the Float Zen Zone, where hanging pod-like chairs sway meditatively above a Japanese zen rock garden near floor to ceiling windows that offer panoramic views of the ocean.

The spa will also feature a modern updated version of a hamman. In the marble and mosaics-laden room, you can (kefir mint) steam, and get the traditional Turkish scrub and bath experience.

Looking more for healing, whether for the soul or from all those cocktails onboard the night before? “There’s a huge movement towards mindfulness, we all know that’s where wellness begins,” said spa director Aisling McCarthy. Which is exactly why crystals can be seen all over the spa menu. There’s even a quartz crystal bed that literally molds and heats around your body during a therapeutic massage.

Each treatment plays off the idea of the ocean, whether it be a seaweed wrap, or a water-filled LED light therapy bed (for a floating, healing treatment), a waterfall room, or even a halotherapy (salt healing) suite utilizing Himalayan sea salt to open up airways.

The ship also features a full service Kerastase hair salon and barber, an infrared healing room, a Bliss Spa for hair removal, an Ideal Image medspa for injectables (it’s the first ever at sea), and all facial and body treatments with high-end British skincare line and experts Elemis. Nutrition and wellness more your thing? There will also be juice bars, a huge variety of different workout studios, and a wellness-focused menu, all with fitness and nutritionist available for customization on board.

Or you could just try out all 124 treatments? After all, some of these treatments exists nowhere else on Earth. Not only is the design of this spa moving the entire industry forward, the treatments are, too.

If the spa treatments, Hoppen, Urquiola, or 29 dining options on board aren’t enough for you, the Edge has just announced the ship’s godmother—basically the spirit of the ship—to be women’s rights and education activist Malala Yousafzai. If that doesn’t convince you, this ship is different than any other before it, we don’t know what will.

The Edge is available for pre-booking now, and voyages range from 3 to 15 days, with routes including the Caribbean to the Amalfi Coast and Greek Islands.