This Antique-Filled Brooklyn Apartment Throws Out the Design Rulebook 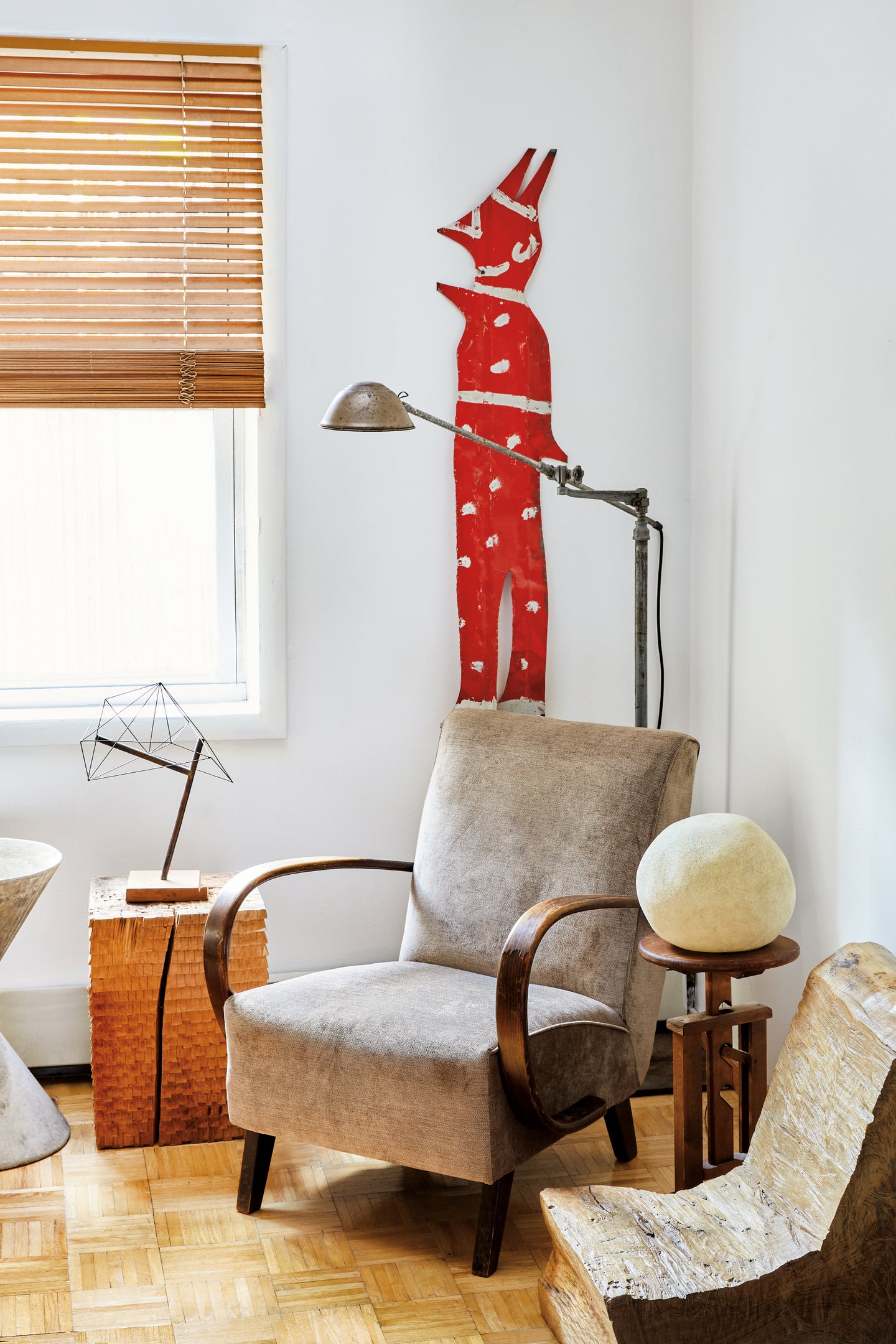 Upon walking into designer Jonny Ribeiro’s apartment in Brooklyn’s Williamsburg neighborhood, one might struggle to characterize his style. Is it folk modernism? Brâncusian Americana? Any attempt to pin down his aesthetic is thwarted  by the sheer diversity of shapes, styles, and origin stories.

Ribeiro’s eye for soulful, imperfect objects and wide-ranging knowledge of art and design have been honed by his early experiences sourcing antiques for Ralph Lauren and his current role as a project manager at Sara Story Design.

And then there are his side hustles: He sources, styles, and sells antiques via his Instagram persona and is developing a new line of lighting inspired by his rare finds. The former practice originated from a need to liquidate portions of an overﬂowing collection, while Ribeiro’s foray into lighting design was born of his infatuation with the duality of the medium: “It’s an object when it’s off, and it takes on another life when it’s illuminated,” he explains. A torchbearer for vintage storytelling in the Internet era, Ribeiro shares his insights on crafting your personally collected space on the following pages.

Get Hooked on a Feeling

Break out your thesaurus and pick two words that describe the ambience you want your space to exude. For Ribeiro, those words are soothing warmth. This atmospheric true north allowed him to focus his palette on the subdued neutrals of a desert landscape with strokes of red and blue

While incorporating both a Noguchi ceiling lantern and a hand-painted devil sculpture in the same bedroom might sound illogical, the two reflect Ribeiro’s passions (Japanese design and Southern folk art) and fit within his color scheme. “Whatever your eye is drawn to, let that drive your aesthetic, not a time or a place,” encourages Ribeiro. Ground your intuition visually with a common palette, material, or texture.

Take a playful approach to antiquing and don’t be afraid to reinterpret an object’s purpose to suit your needs and space. In Ribeiro’s world, antique wooden conveyor belts become textured floor coverings (and wall decor), an 1880s dry sink functions as an oversize nightstand, and a vintage Jean Prouvé replica swing light is modified with a custom conical shade. Ribeiro’s advice on how to achieve this mind-set? “Never stop to think: Do I have a place for this?”

“For me, lighting is the most important aspect of a home,” says Ribeiro. “It’s so dynamic.” Mix types of lighting (ceiling, wall, floor, and table) and always use dimmer switches to multiply the mood potential. Renting? Go for plug-in sconces that don’t require an electrician, and floor lamps that serve both as sculpture and light source.

This story originally appeared in the Winter 2018 issue of Domino, titled “Mix Master.” Subscribe to be the first to receive each issue!

See more home tours we’re loving: This Canadian Couple’s Toronto Home Is Filled With Vibrant Art and Old Records Inside a Big Bear Lake Cabin Where Retro Tiles Steal the Show This Is the Chicest Bachelor Pad in LA, Hands Down