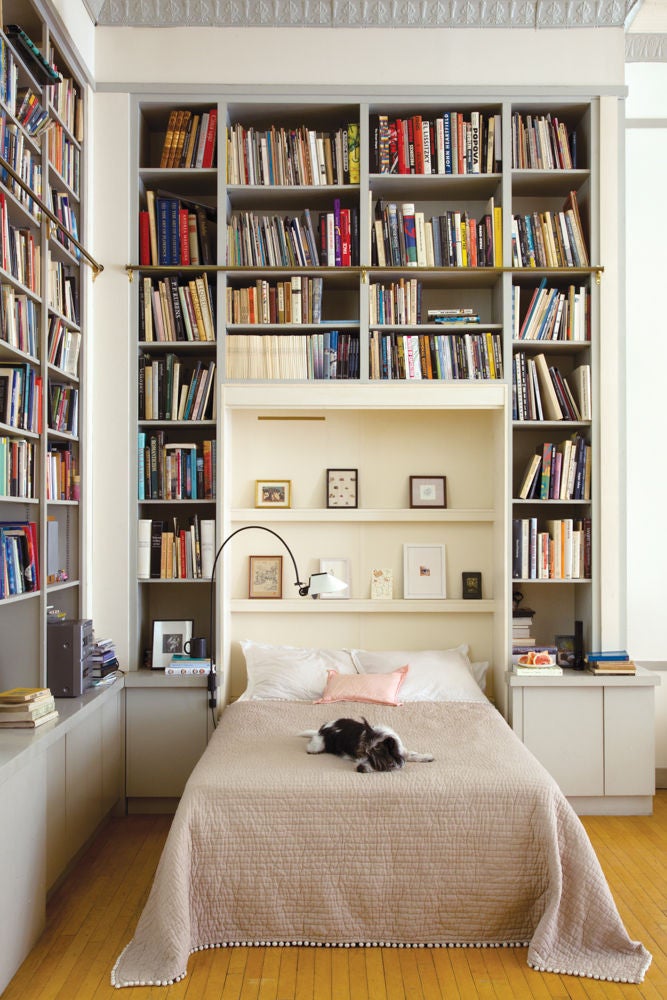 A vintage chaise lounge is framed by a retro Noguchi floor lamp and modernist paintings by David Diao.

Avillez at home in her TriBeCa loft.

free spirit Although she’s technically only called it home for the last five years, Joana Avillez’s TriBeCa loft has been a part of her life for decades. Once a noodle factory in the 1970s, the space was then used by her artist father, Martim Avillez, as an office to publish his influential cultural magazine, Lusitania. In August 2010, Avillez moved into the pad with her pup, Pepito, and worked her own creative magic on the place. The loft is essentially one large room—encompassing everything from sleeping quarters to a kitchen and work studio—and Avillez managed to carefully carve out separate nooks without cluttering or compromising the airy flow. Handcrafted additions such as convertible tables, retractable furniture, and built-in bookshelves forge functional enclaves throughout the otherwise open area. “The space is defined by use, not walls,” Avillez explains. “It keeps the atmosphere unrestrained but orderly.”

Avillez’s father built her sleek—and easily dismantled—dining table by simply placing a varnished board of wood atop two sawhorses.

“The key to having a successful in-home studio is turning your desk away from your bed,” says Avillez—who’s drawn for the likes of Lena Dunham, Joan Didion, and Vanity Fair.

Artworks from friends and family surround an old desk from Portugal that Avillez uses as a dresser.

A bentwood chair that once belonged to artist Louise Bourgeois—still bearing paint splatters from her studio—flanks a salvaged marble bistro table.

A folding Murphy bed can be hidden with ease inside the loft’s built-in bookshelves.

innate innovator Although most of Avillez’s own illustrations are done with a simple ballpoint pen, her home is enlivened with a mixed medley of art created by her talented family and inner circle. Works from friends such as Dike Blair, Jason Polan, and Leah Reena Goren can be found among heirloom paintings, inherited objects—including a sculpture of a ship that was made and gifted to Avillez by her father—and her own personal drawings. “I feel like the space was designed to inspire someone to get up and be creative,” Avillez says. “There’s a strong sense of imagination in the air.”

Treasures such as hand-painted ceramic figurines and an Art Deco glass sculpture by René Lalique can be found adorning the dresser tops of Avillez’s apartment.

A portrait of Avillez’s grandmother Yvonne Thomas—done by Serbian artist and friend Milena Pavlović-Barili—rests above a filing cabinet found on the street.