But still wallpapered the ceiling. 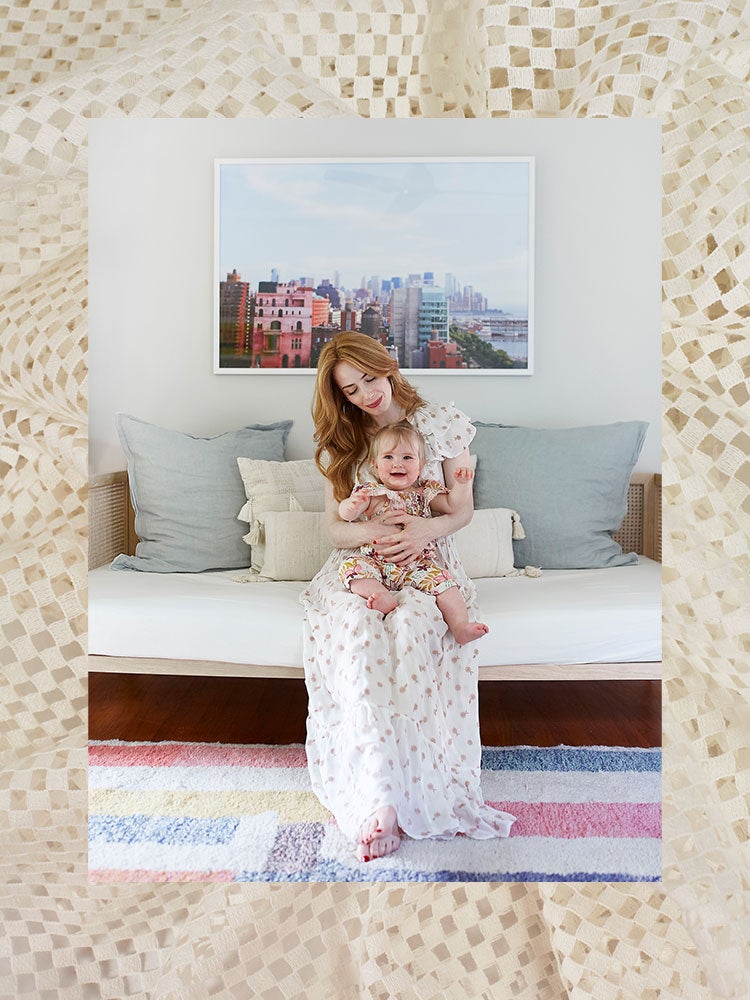 When Jaime Ray Newman brought her newborn daughter, Alma, home from the hospital, the nursery didn’t even have a crib. “It took us a very long time to have a baby after years of heartbreak,” explains the producer and actress, “so my husband and I decided to literally do nothing until Alma was born and safe and healthy. We finally had her via our wonderful surrogate.”

This made the room an extra-special project—and one that needed to be done right away. “I called Haley Weidenbaum frantically saying, ‘Help! I need a nursery ASAP,’” remembers the Ray Newman. “And because Haley is my soul designer and we’ve been working together for years, we already had a shorthand.” The designer promptly got to work designing a space that would suit the baby as much as the parents.

“The first night after the installation was, by no coincidence, the first night Alma slept a full 12 hours,” says Ray Newman. Here, Weidenbaum shares the most thoughtful details in the room.

Most nurseries are converted spaces, previously home offices, guest bedrooms, and even closets. The common thread is they’re often quite small. To solve for this one’s low ceilings (it used to be a workspace), the designer made an unexpected choice: wallpapering the ceiling in Juju Papers’ Pas de Trois. “I knew that if we were discerning with our choice of pattern, we could actually add dimension and trick the eye into believing the room was taller,” Weidenbaum says.

For the floor plan, Weidenbaum was determined to make use of every inch of wall space. She installed a large banquette under the bay window and added a crib for the baby opposite a daybed for parents and guests. Only one thing was missing: the changing table—and it quickly became clear that there wasn’t space for it.

“Fortunately, the closet had not been built out at all,” says Weidenbaum. In went a dresser, the Hudson style from Babyletto, with a changing pad on top, as well as some bookshelves and clothing rods. The closet doors came off to make the whole room feel bigger and more open.

Weidenbaum had durability and longevity in mind with every purchase. The entire room came together around a colorful, patterned rug that would provide Alma with a cushy spot on the hardwoods for tummy time and, eventually, crawling around. (If the room were carpeted, Weidenbaum points out, the same piece would protect the lighter surface from spills and stains.) The designer also opted for a more affordable crib, which the family would only need for a couple of years, in favor of a daybed that could grow with the child. Now that’s a savvy splurge and save.

A crib might not be worth splurging on, but these things are: