The treatment is designed to be messy. 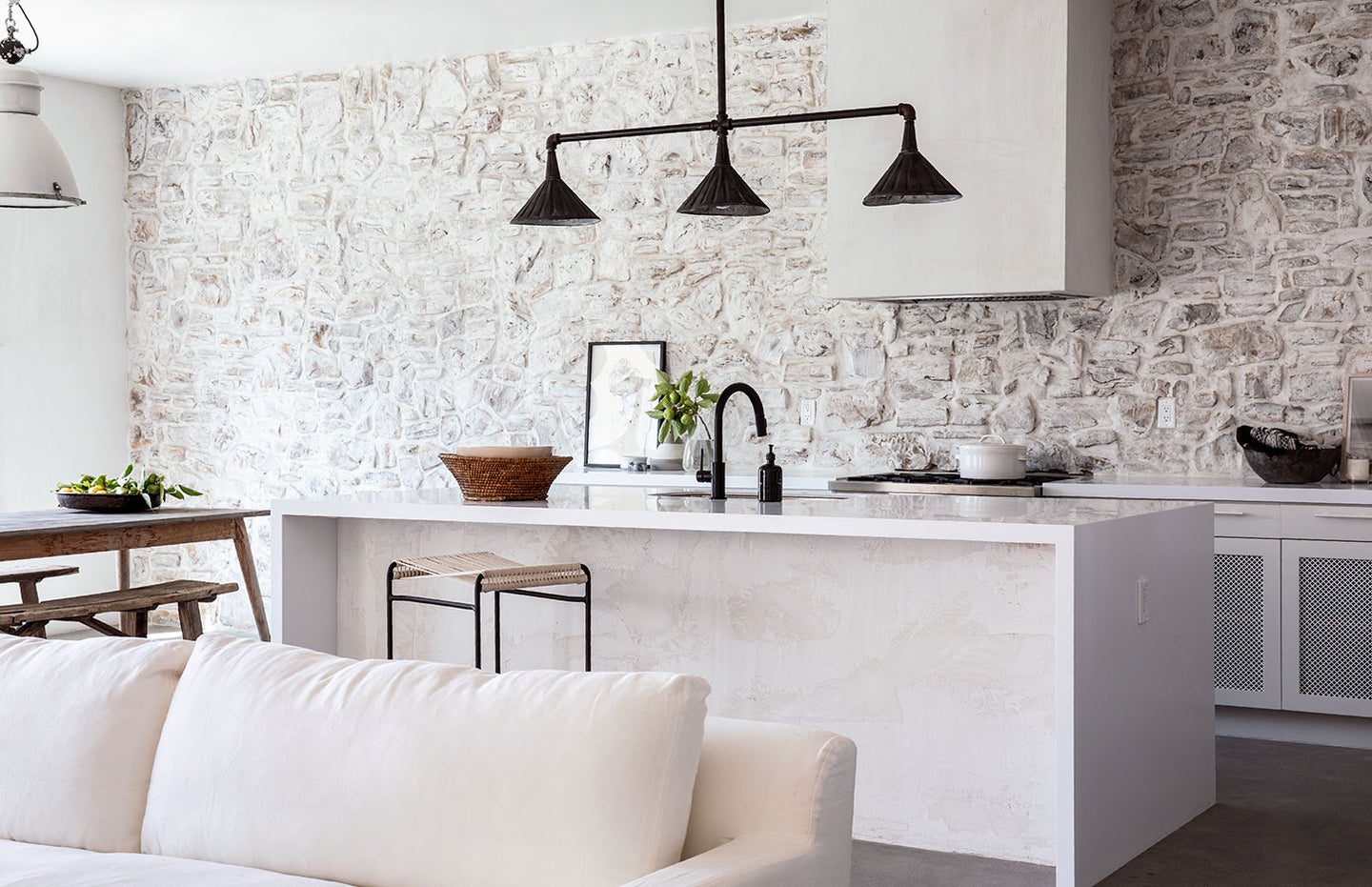 I usually only work on old houses, spaces where I find character and figure out how to keep it. The Rock the Block home I designed for HGTV was my first time doing new construction. The place was a blank shell, void of charm, so I knew I had to bring in the soul. It quickly became a case study. On the walls of the kitchen we used my go-to treatment for achieving texture: SureCrete. (I used this same concrete skim coat all over my old bathroom to disguise the ugly shower tiles.) Then to make the room feel a bit earthier, like it had been there forever, we added stone.

I knew I wanted it to have a white, washed-out look, but the stone we could afford was nothing like that. It was more in the red-brown family—pretty but not what we were going for. I figured, we’re going to have to paint this. My brother, Steve Ford, and the construction team got to work on applying the grout to the seams of the stone wall. It just so happened that I walked in at a moment when they were on a break and the grout hadn’t been cleaned off the stones yet (you typically grout all over the surface at first). I thought, This is what I want it to look like! It was a total happy accident.

Steve kind of laughed when I told him not to wipe it down anymore. He’s a creative contractor. At first it’s a little hard for him to break the rules, but he always finds a way to figure it out. “It’s like a very messy art project,” he says. Steve shares some of the supplies you’ll need on hand to try this yourself:

Steve starts with the trowel, applying the mixture randomly over a section of the wall. Then he’ll pick up a sponge to remove some of the excess material. The paintbrushes are handy when you want to achieve different types of movement and patterns. “It dries pretty quickly, but it all depends on how thick you go,” he says. The last step is applying a quality concrete sealer in a flat finish. “If you can handle the mess in the short-term, it’s an interesting art project that really looks great,” Steve adds. “It’s not expensive, and it’s a way to basically upcycle an existing surface.”

The grout added some roughness to the wall—literally, it feels like sand—that a coat of paint couldn’t do. The important thing was not using a pure white color; the stone looks like it was naturally bleached out. It’s a texture on top of the texture, and that’s what I like about it.

In addition to stone, I’ve tried this on brick and, most recently, concrete block. If I see a bucket of something lying around on a construction site, it’s fair game.