how to shuck and serve oysters

Here's how to throw together a half-shell feast in no time. 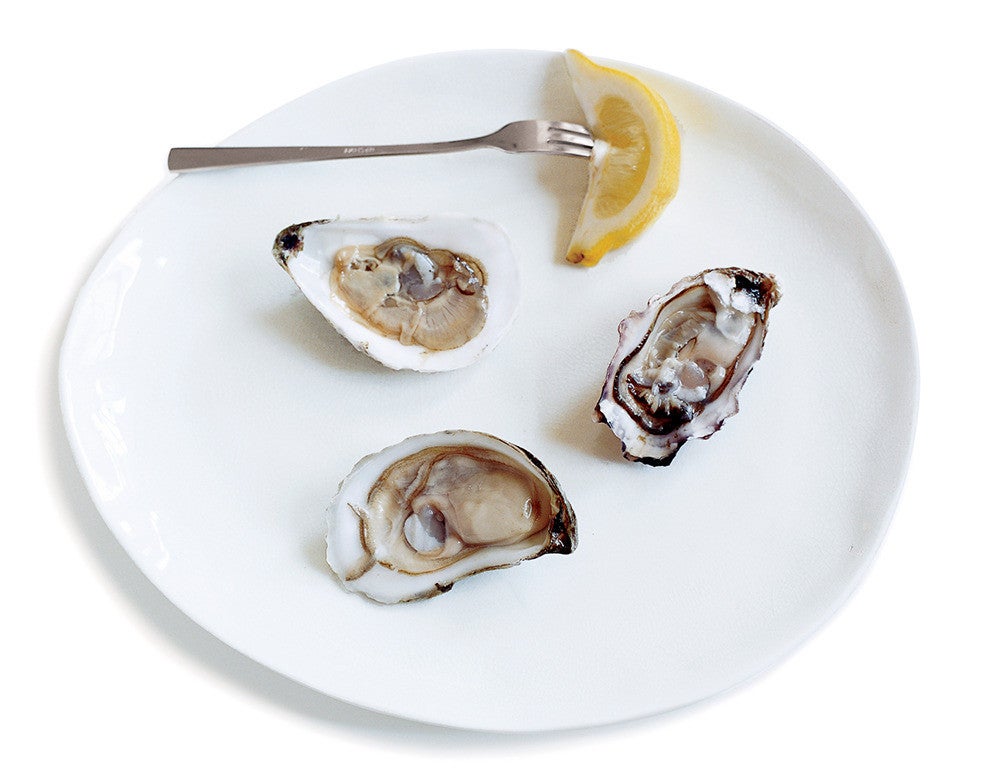 Think you only have to go out for oysters?

Think again. The components are outrageously easy: all the raw oysters you and your friends can shuck and a few totally optional condiments. Oysters are delicious at a Saturday lunch, accompanied by a simple green salad and rustic bread and butter. Stock up on plenty of light, crisp white wine—Muscadet is a favorite—and you’re good to go.

We like to offer our guests three varieties of oysters: one East Coast, one West Coast, and one unusual type.

At first, they taste like the mouthful of seawater you swallow when jumping waves, but they slowly open up to reveal a creamy core.

Harvested from the cold waters around Prince Edward Island by fishermen with handheld rakes, these have a delicate texture and the crisp flavor of the North Atlantic.

The cold, mountain-fed waters of Washington State’s Hama Hama River give these oysters their mild flavor and firm meat.

Long and oval-shelled, these oysters have a distinctive fluting on the outside. Inside, they’re outrageously rich and smoky sweet.

Totten Inlet Virginica: Eastern transplants to the Pacific, these are big, creamy and slightly pink, with just the right note of salt. If you’re an oyster neophyte, start here!

Kumamoto: This Japanese oyster, commonly grown on the West Coast, is petite, sweet, and buttery.

Also known as Belons, these intrigue with a bracing brininess and coppery aftertaste.

You don’t need to serve oysters with anything, but it’s nice to put out a few possibilities. Never serve oysters with cocktail sauce, as it completely buries the flavor. Instead, try horseradish (freshly grated if you can find it), lemon wedges, or a splash of mignonette, a piquant sauce that’s popular in France.

how to shuck the oysters
Step 1. Rinse the outside of the oysters under cold running water to remove dirt and debris. Discard any oysters that are not tightly closed.

One at a time, place oysters inside a dish towel that’s laid out on a sturdy surface, cupped side down, with the hinge pointing toward the right.

Cover the left half of the oyster with the dish towel, and press down on the towel and oyster with your left hand. With your right, insert the knife into the hinge at a downward angle.

Use short turning movements to get the knife in the shell. Once inside, continue prying around the outside to open the top shell. Reserve as much liquid as possible in the shell.

Run the knife under the oyster to disconnect the muscle from the bottom shell without removing the oyster meat. Serve on the half shell immediately, over ice.