I Like Quirky Italian Design, He Prefers Moody British Interiors

Here’s how we navigated styling a home together. 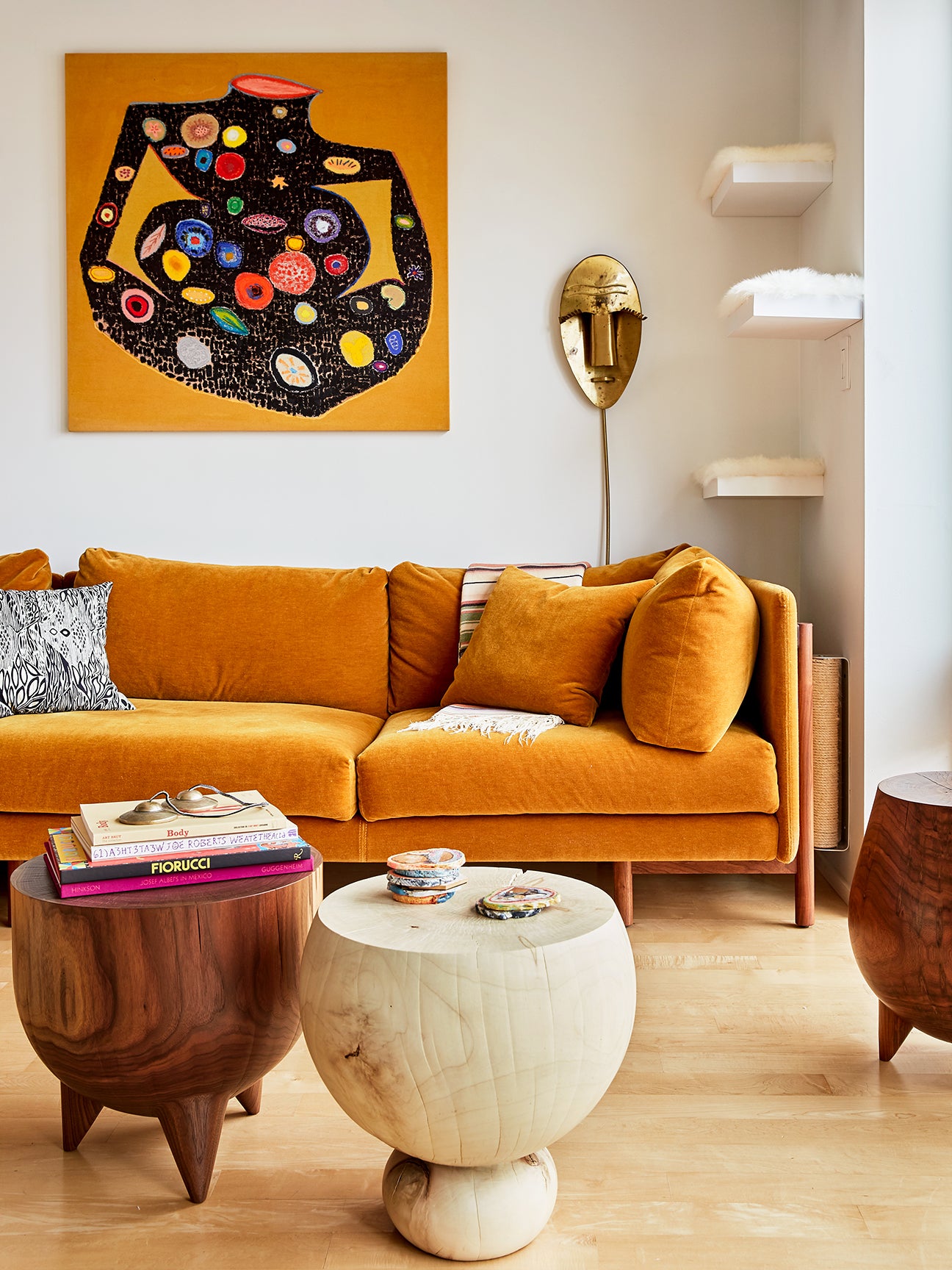 My boyfriend’s ultimate fantasy would be to live in a Downton Abbey-meets-Soho House countryside manor filled with dark bookshelves and leather Chesterfields (he is British, after all). I, on the other hand, gravitate towards lighter, more colorful and quirkier spaces (like if a quirky Milanese artist moved to a shack in Canada, sort of).

When we moved in together with only a few furniture pieces from my old apartment, I immediately started saving inspiration photos to a Pinterest board. One night over dinner, I excitedly ran him through the slideshow. He hated everything. However, he was eager to learn more about design and asked me to suggest a few Instagram accounts to follow.

Now, he sends me interiors he loves, most of them dark gray, traditional bathrooms or moody living rooms with red ceilings and forest green velvet sofas. But on a few occasions, he has sent me back the same images of things he’d knocked a few weeks earlier, like a striped pillow chair from ASH NYC. I’ve won half the battle. Pro tip: There’s something to be said about how repeated exposure can alter your taste.

Yes, meshing personal styles with a significant other can be a bumpy ride filled with fabric swatch disagreements and disliked heirlooms—but it doesn’t have to be. Curious to know how team Domino had navigated the experience, I asked around. Consider this your official guide to couples’ apartment therapy.

Capitalize on the Sliver of Style Overlap

If my boyfriend could live in a Restoration Hardware catalog, he would. His style skews more traditional, with touches of modern, and he’s pretty into matching furniture sets, i.e., a bed with coordinating nightstands. I, on the other hand, have an unhealthy obsession with trinkets and found objects. Almost everything I owned in my old apartment was either white or beige, but I had this indigo dresser in the middle of the studio that totally stole the spotlight.

Our styles may as well be polar opposites, but there is a sliver of overlap, and we’ve been working very hard to capitalize on that. I sold about half of my belongings before moving, and brought my sofa and dresser to the new place. He had to, begrudgingly, let go of his most prized possession: a charcoal velvet love seat that looked more brown than gray (no matter how hard he tried to convince me otherwise). —Anna Kocharian, brand partnerships editor

Stash a Few Sentimentals in the Closet

My husband is more of a traditionalist; he grew up in New England and really likes things that are Colonial-style. In terms of colors, he is more into neutrals and blues—cool tones in general, which I’m also into.

He found this vintage clock that reminded him of his childhood while we were traveling a few years ago, and it was something I wasn’t crazy about. But he felt strongly about it, and I was able to style it into our bookshelf in a way that doesn’t make it the focal point. Would I have picked it on my own? No, but I know it has value to Dan and I want to ensure we live in a home that isn’t dominated by only one partner’s taste or style. Of course, there are a few other items that are still stashed in a closet. —Andie Diemer, deputy photo editor

Assign Tasks (and Stick to Them)

My wife’s style tends more toward the delicate, sweet, and fresh, with floral touches and muted moodiness—we call it Snow White’s French Cottage. I lean toward raw, earthy surfaces with lots of patina filtered through a warm, soothing Scandinavian lens (think: a cheerier Axel Vervoordt).

Our decorating process has been a measured process of accumulation rather than trying to dash something together for the sake of being ‘finished.’ While both of us are very opinionated and aesthetic oriented (I do work at Domino after all), the ways in which we contribute to the space differ. I’m an idea forager—constantly pinning to our shared Pinterest board (an organization must!), saving pics on Instagram, and scouring vintage sites. Brooke, on the other hand, has a keen gut instinct and ability to avoid passing trends and favor timeless treasures. Thus, our decision-making process often looks like me showing her a range of options I think could work and her narrowing them down. —Cyrus Ferguson, membership and market manager

Know What You’re Good At

Three months into dating, I helped my boyfriend look for apartments. The idea that I would ultimately live there was already in the back of our minds. I finally moved in about three months ago and have tried really hard to just be in the space and not rush the decorating process. I’m a managing editor through and through: I have checklists, budgets, Pinterest boards, and IKEA planner renderings. Planning is more of a compulsion for me, and putting together a home with the person I love is definitely one of the more fun ways to channel that energy. —Liz Mundle, managing editor

Embrace the Life-Changing Magic of Decluttering

My husband and I have not technically moved into one apartment yet (we live in separate cities during the week), but we’ve started Marie Kondo–ing the furniture that exists in our individual apartments so that we’re only left with items that bring joy. In our new place, we’ll purchase items we both approve of. —Tracy Cho, general manager

Discover more cohabitating tips for couples: My Boyfriend and I Sleep in Separate Rooms and Absolutely Love It Not to Be Dramatic, But Using a Chore Chart Literally Saved My Relationship 4 NYC Couples Get Real About Sharing a Bathroom and Making It Work