Yes, You Can Regrow Your Vegetables From Scraps 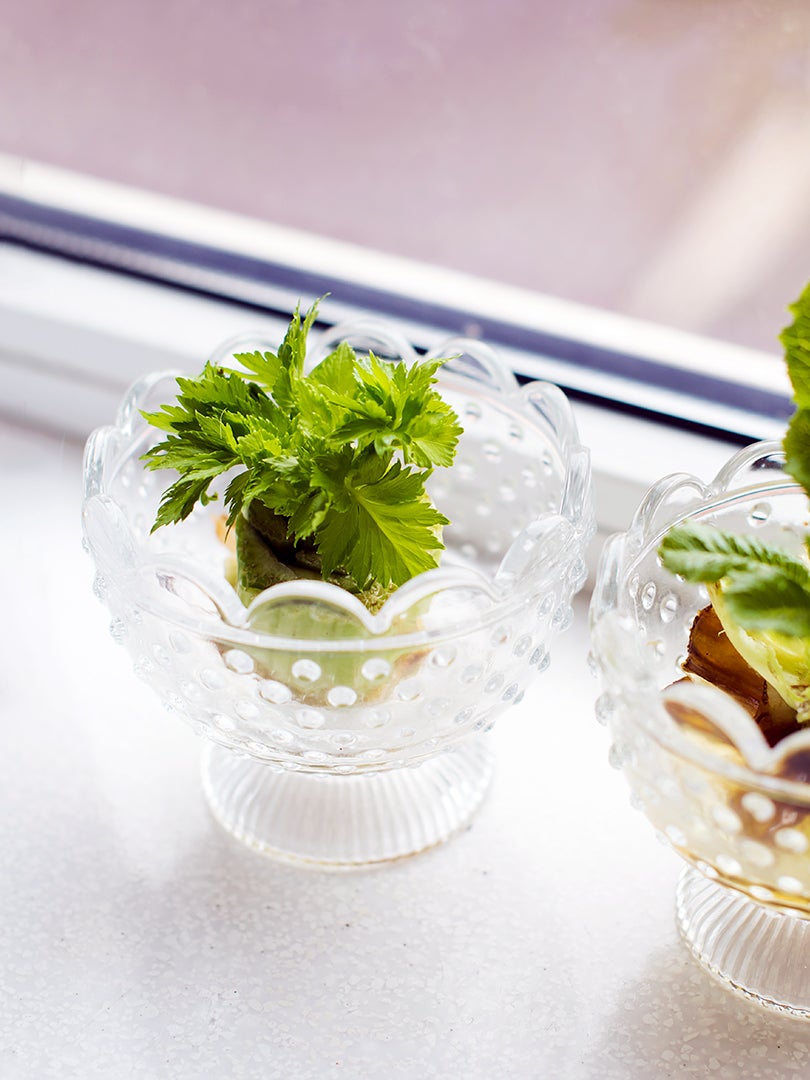 A small stub of celery placed in a jar of water grows like a beanstalk, and a head of lettuce in a pot regenerates in an instant. Regrowing your food from scraps might seem like a fantasy, but it’s entirely possible to do in your own home.

According to Ryan McCallister, personal gardener to Martha Stewart, the process is pretty easy (though not entirely foolproof). It’s a great way to extend the life of your produce, but admittedly it’s not going to result in a never-ending supply of fresh greens. “You can’t buy celery once and keep growing enough to last the whole year,” says McCallister. “But it’s a nice way to get a little more out of what you already have.” Here, he explains everything you need to know about how it’s done.

What foods can you regrow?

Any kind of food with a visible root still attached can be replanted. This means onions, scallions, full heads of lettuce, and celery are great candidates, as are root vegetables such as carrots and radishes. Larger vegetables, like cabbage, are also possible to replant, but if you’re working with a container garden inside, they’re a bigger challenge.

How should you replant them?

When you’re cutting your vegetables, leave about two inches from the root (think: the white end of a scallion or a head of lettuce or the top of a carrot right before the greens start). These parts can be planted in potting soil—McCallister recommends this method over placing them in water for more consistent results and less risk of rot and mold.

To figure out how deeply to submerge them in the dirt, think about how the vegetable looks when it’s full-grown: Onions should go completely under the soil (about an inch or two), lettuce should be placed just under the surface, carrots should have their greens sticking out (they can be trimmed so they’re not so top-heavy), and so on.

Keep the soil damp but not soaking, especially in the first week of growth when roots haven’t fully grown and you risk rotting the vegetable scraps. “Think of the consistency of a kitchen sponge when it’s just been squeezed of its excess water,” says McCallister. “That’s about how wet your soil should be.”

How long will it take for them to sprout?

Your greens won’t grow back overnight, but in two weeks’ time, you should see a good difference. If you’ve planted vegetables under the soil, like carrots, you can gently tug at the tops to determine if they’ve grown—if you feel resistance, the roots have likely formed. Food that grows upward, such as lettuce and green onions, will be visible above the surface.

You won’t grow a carrot as long as one you’d buy at the grocery store, and your lettuce won’t be as full as the head you started out with, but you will get a little more food out of the parts that seemed destined for the compost anyway—and that’s something worth celebrating, no matter how small.

See more stories like this: 5 Recipes That Turn Canned Beans Into Treasure How to Turn Simple Ingredients Into Fancy Food Without Even Trying You Don’t Need to Go to the Grocery Store to Get Fresh Produce