We tapped a pro to show us how. 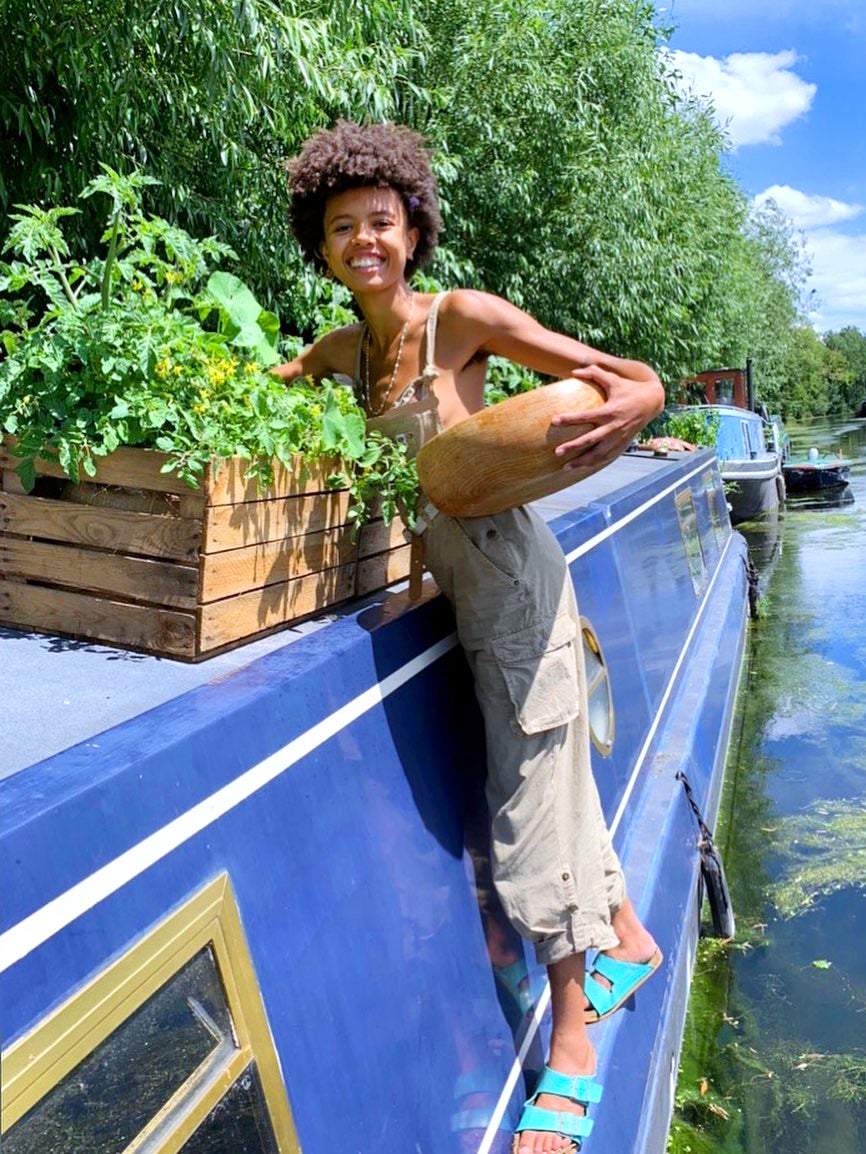 “Growing came to me as an act of radical self-care,” explains horticulturalist Poppy Okotcha. What began as a personal exercise to address her health struggles quickly morphed into a whole new lifestyle. Now most of the deck and roof of her big blue London-docked houseboat are covered in all sorts of greenery, and she shares her learnings in real time with 36,000 Instagram followers. “I realized pretty quickly that human well-being is totally connected to that of the earth’s soils, ecosystems, and the whole planet,” she says. “Remembering the old ways of growing and harvest has become part of honoring my heritage, keeping indigenous ancestral wisdom alive.”

One way she does this is through her layered planter. It’s the gardening equivalent of a one-pan dinner: In a matter of minutes, you toss a bunch of different seeds into the soil, wait for them to flourish, and end up with a constantly rotating harvest of plants and veggies. It’s an idea Okotcha lifted from Mother Nature: “Whenever I design, I think: What is nature doing about this? And how can I emulate that?” she says. Four weeks later, she was ready to reap the benefits.

For those with limited square footage, this is the perfect way to grow as many different crops as you might with a sprawling garden. Plus it’s a more efficient way to get fresh produce—since each plant is on its own unique harvesting schedule, there’s always something new sprouting, which means less time spent waiting around for peppers and snap peas to appear. “Harvesting a more diverse range of crops makes for a diverse diet, and a diverse diet makes for a healthier human,” explains Okotcha.

Ready to try your hand at your own layered planter? Here’s how Okotcha makes the most of her all-in-one garden.

If you’re planning on growing anything that might require support down the road, put the stakes in first. Then sow all the seeds in one go—and sprinkle in a few more than you think you’ll need. “You may get lucky and they’ll all germinate,” says Okotcha. If they do, thin out any extras and eat them to avoid overcrowding.

Layered planters are broken into two sections: ground-cover crops and canopy crops. Okotcha included a few different plants in each group to maximize output, making sure that every variety had different maturity and harvest dates so there was never a lull in production. As long as you set the scene for a healthy garden, you might even end up with a few surprise visitors: Okotcha discovered a rogue self-seeded chamomile plant that had popped up in her pot. “I’ve been harvesting its flowers for tea, leaving a few behind for the pollinators!” she says.

Prioritize Speed for the Ground-Cover Layer

Pick crops proven to spread quickly, so the soil is covered—these will act as “pioneer species” (greens that create a more hospitable environment) for the upper level. Okotcha chose mustard greens, which need six to eight weeks to mature; loose-leaf lettuce, which requires eight to 10 weeks; and Asian salad seed mix, which only takes four weeks. Collect your veggies as soon as they’re ready; you want to make sure the plants have enough light and air between harvests.

Go for Height in the Canopy Layer

Okotcha selected broad beans, peas, mange-tout, and fava beans, all of which would eventually stand at about 3 to 4 feet tall to shade the “understory” of leafy vegetables. The beans need 14 to 32 weeks, and the peas require 12 to 14 weeks before they’re ready to harvest.

Pro tip: If you’re planning on growing peas, pinch out their tips down to the first leaves when they reach about 4 to 8 inches. “This will encourage them to grow bushier,” explains Okotcha.

Pile on the TLC

Given that you’ll be working with so many different types of greenery, read up on what their light and water requirements are, and stay on schedule. “Lots of plants need lots of water,” says Okotcha. Pepper in some organic or homemade plant feed to keep your garden happy—then step back and watch everything bloom.