Greg and Amanda Silverman styled a beautiful space with family in mind. 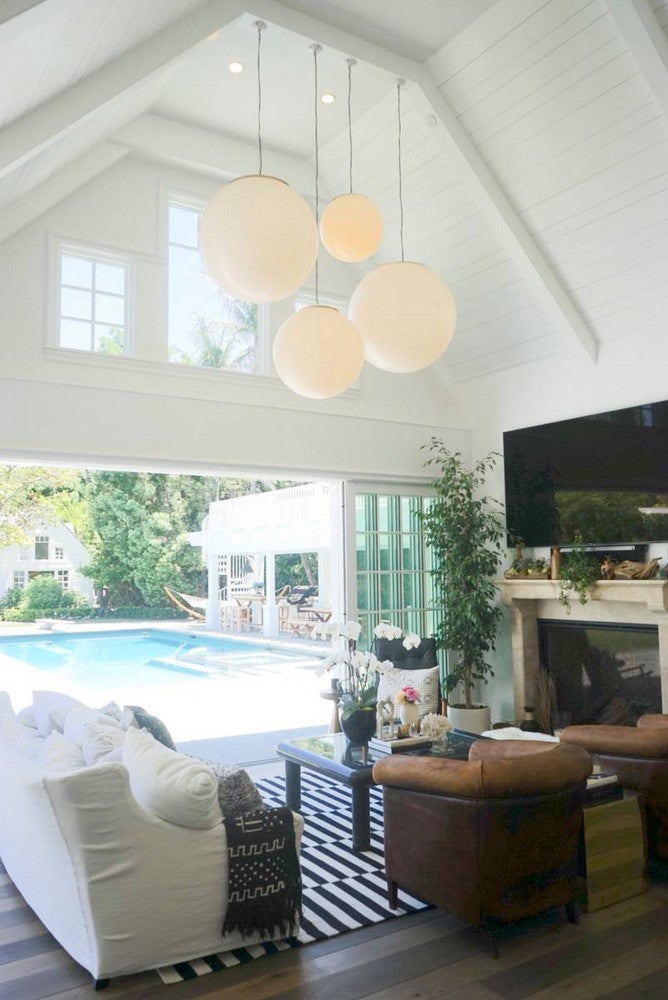 The family room is a mix of high and low pieces, with a custom made couch, an Ikea rug, and an Eames chair scored at the flea market.

When a top-tier Hollywood Movie Executive needed someone to design his new home, he turned to the one person he trusts most: his wife.

, President of Creative Development and Worldwide Production for Warner Bros., and his wife, Amanda, bought their home in the San Fernando Valley, they expected to do some renovations, but they wound up taking on a two-and-a-half year project that included adding a basement and redesigning the entire house. Amanda’s love of design, combined with her commitment to creating a home that was elegant enough to entertain movie stars, but comfortable and homey enough for the couple’s four sons, resulted in a spectacular family compound.

One of Amanda’s must-haves when decorating the house was a dedicated table in the play room for puzzles and board games, so she designed the octagonal table to serve that purpose. A vignette in the living room features coral purchased at the Rose Bowl flea market.

Amanda found the kitchen light fixtures and stools at the Paris flea market while on location with Greg, and had them shipped back to the U.S.

WHAT WAS ONE OF THE BIGGEST CHALLENGES WHEN DECORATING A HOME THIS SIZE? The openness – which we love – made dividing up the space challenging. It was difficult to pick out paint or wallpapers for different rooms because everything flows into each other. For instance, I wasn’t sure where exactly to end the sea grass wallpaper in the playroom, but it now defines the space really well, and it’s so much warmer than if it was just painted white.

WHAT’S THE KEY TO MAKING A BIG HOUSE FEEL HOMEY AND LIVED IN? All of the common areas – the kitchen, playroom and family room – are really designed for communal living. The original bedrooms were small and quirky, and we opted to keep those mostly intact instead of turning them into large rooms with en suite bathrooms, which I thought would make the house feel more like a hotel, and would discourage the kids from spending time in the common areas. I think it’s possible for a family home to be beautiful, but also warm and inviting. To that end, no surface is too precious or stiff.

WHAT ARE SOME OF YOUR FAVORITE PIECES IN THE HOUSE? I love our furry dining room chairs, because they marry a playful attitude with coziness. My brother-in-law owns Bespoke Furniture, a custom furniture company here in LA, and he made the chairs for me based on an idea I had. I’m amazingly lucky to be able to collaborate with him on these projects, because it makes almost anything possible!

I also really love our Slim Aarons photograph of the Hotel Du Cap. Greg and I love to go to that hotel during the Cannes Film Festival, which he attends annually, and it’s the epitome of glamour and beauty!

A Slim Aarons photograph of the Hotel Du Cap hangs on the wall between the foyer and the kitchen.

The hardwood floors are all reclaimed wood which makes the space feel more rustic and unexpected.

YOUR CLOSET IS A FASHIONISTA’S DREAM, AND THE WALLPAPER IS GORGEOUS! TELL ME ABOUT THAT. I love my closet and I feel like a kid in a candy store when I step in there. Initially, the closet was white and simple, but after living in the house for a few months it started to feel too antiseptic, so I added the wallpaper on the ceiling. The wallpaper really made it feel glamorous.

The library is a masculine space painted a dark navy blue, and the felted ceiling has nail head trim.

Original prints by photojournalist Ken Heyman (Amanda’s Father) anchor a stone table in the living room. The Silverman’s retained a portion of the original house, including the living room’s beamed ceiling and large wood burning fireplace.

YOUR MOM USED TO BE AN ANTIQUE DEALER. HOW HAS THAT INFLUENCED YOUR DECORATING STYLE? Growing up, I spent every weekend going to antique shows, and we always spent vacations in London. I learned from a young age the thrill of finding unexpected treasures, and I love going to flea markets here in LA; you never know what stand out pieces you’ll find that will add something unique to your home (often at a reasonable price).

The Chesterfield sofa in the living room is over a 100 years old, and was initially meant for Greg’s work office.

WHAT’S YOUR ADVICE FOR SOMEONE READY TO TACKLE A MASSIVE DESIGN PROJECT? Mix things up! Nothing should look too precious or designer-y but rather should reflect how your family lives.

The garden room, which was originally supposed to be outside, had to be enclosed during the construction process. Orchids and succulents, as well as flea market finds, now have pride of place.

His and hers vanities from Restoration Hardware were painted in a custom color to blend with the Master bathroom.

The master bathroom tub is the same model as at the Mandarin Oriental in Las Vegas, where the couple stayed and discovered it was big enough to comfortably hold two adults lying side by side. The tub is a hit with the Silverman kids as well.