How to Bring City Vibes to a Country Home

A New York City couple incorporates modern furnishings and art into an 1830’s home in Connecticut. 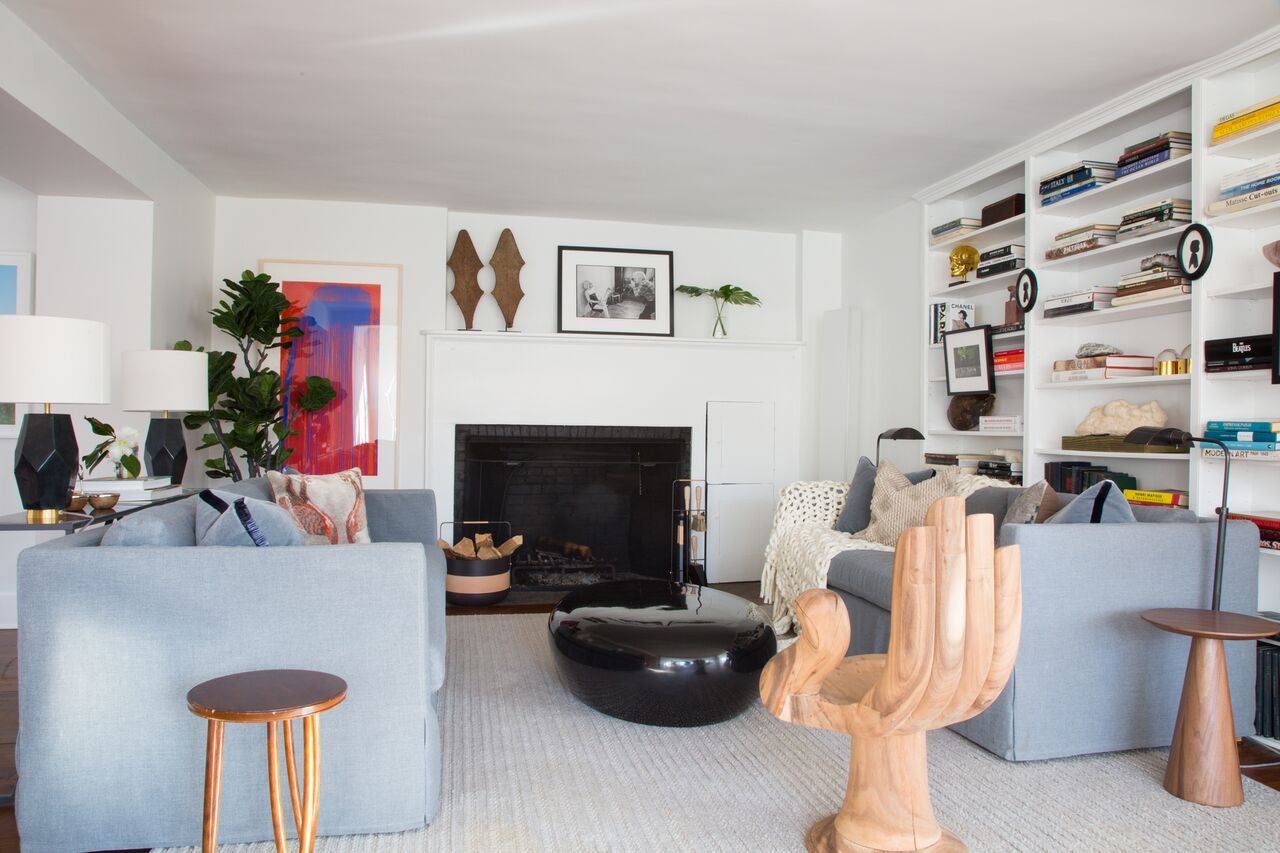 When Amanda Tarter and Josh Flaherty were looking to put down roots outside their longtime home of New York City, they did not expect to fall in love with a sprawling 1830’s home. They toured the home with their friend and interior designer Lauren Rasken of Lauren Balkan Designs and immediately fell in love with the wood beam ceilings, original fireplaces, and lush landscape. Like all good love stories, it was all completely unexpected.

Though the couple wanted to update the house to fit their more modern aesthetic and collection of art, they wanted to keep the original bones and quirky details intact. “This is a house with character, so we wanted to it to feel more like them, but wanted to maintain the quality of the home and its beauty,” says Rasken.

The original wood floors of varying sizes stayed and so did all the existing fireplaces. Every door in the house had different hardware, which they also wanted to keep. “It’s part of the beauty and charm of an old home. You’re either thrown by it or can relate to it,” says Rasken.

One of the biggest projects on the list was the living area, the center of any family home. Rasken chose to designate the large space into three distinct areas intended for different uses. The family has two young kids so making sure it could handle the occasional rowdy crowd was key.

Rasken convinced the couple to treat the built-in bookcase as a wall so that the room could have a better layout. By pushing a sofa up against it, Rasken was still able to use the shelves to house books and hang artwork from it, creating a utilitarian focal point in the space.

Both Amanda and Josh have a deep admiration for art and photography and their personal collection reflects this. On the living room mantel is a photo by Chris Stein, founding member of Blondie. The photo is of Andy Warhol taking a polaroid of Debbie Harry for the portrait he was about to paint of her. The photo was a gift from Stein himself, who homeowner Josh once managed.

Highlighting the beautiful bay windows was another goal for the room. Four swivel chairs and an antique armoire helped turn it into a cozy, conversational nook. Plus, the dry bar is within arm’s reach of the armoire—perfect for visitors that may need a refill.

The dining room had details only found in old homes, including built-in corner china cabinets and a mismatched ceiling height. Rasken used a japanese paper weave wallpaper to cover the walls. “The dining area was right off the entry, where we used a bold, grid wallpaper from Kelly Wearstler,” says Rasken. “It served as a nice transition to move from a big graphic to a tighter weave.” The beam was also the perfect spot to hang a modern chandelier.

Lighting challenges proved to be an issue in every room. Like many old homes, this house had virtually no

Even though the couple was upgrading from a New York sized space to a bigger home, Rasken was able to use many of their existing pieces. Rather than cast away older items, Rasken suggested using pieces in new ways. A diamond rug in the living room moved from their Hamptons home and an old pine table from Josh’s Mom found a new home all the way from Santa Fe.

“You don’t always need to buy all new furniture for a new space. You just need to think of reusing pieces differently,” says Rasken.

The couple wanted a relaxing master retreat that could be an escape from the rest of the house. Neutrals, soft grays and blues were the primary palette. Rasken added a chaise lounger for reading (and reposing) and included Amanda’s antique chest from her Mother as a nightstand. “Sometimes I feel like I’m at a five-star inn,” says Amanda.

The couple’s son Chase’s bedroom was where Rasken was able to have lots of fun. Since Josh works in the music industry, she brought in bits of inspiration from his job with a stereo-laden wallpaper by Aimee Wilder. The room originally had no closet or storage space at all, which isn’t ideal for a young boy’s bedroom.

One solution to this was a built-in bed highlighting the sloped ceiling in the room with storage drawers beneath it. “The idea was to create a space that could grow with Chase,” says Rasken. “It almost became the most special room from the project because it had such a big transformation.”

Even though the house is filled with collectible artwork and family heirlooms, the family never wanted the home to feel like a museum. “This is the house that people just stop by and end up staying a while,” says Rasken. “It’s just as inviting as the people that live here.”