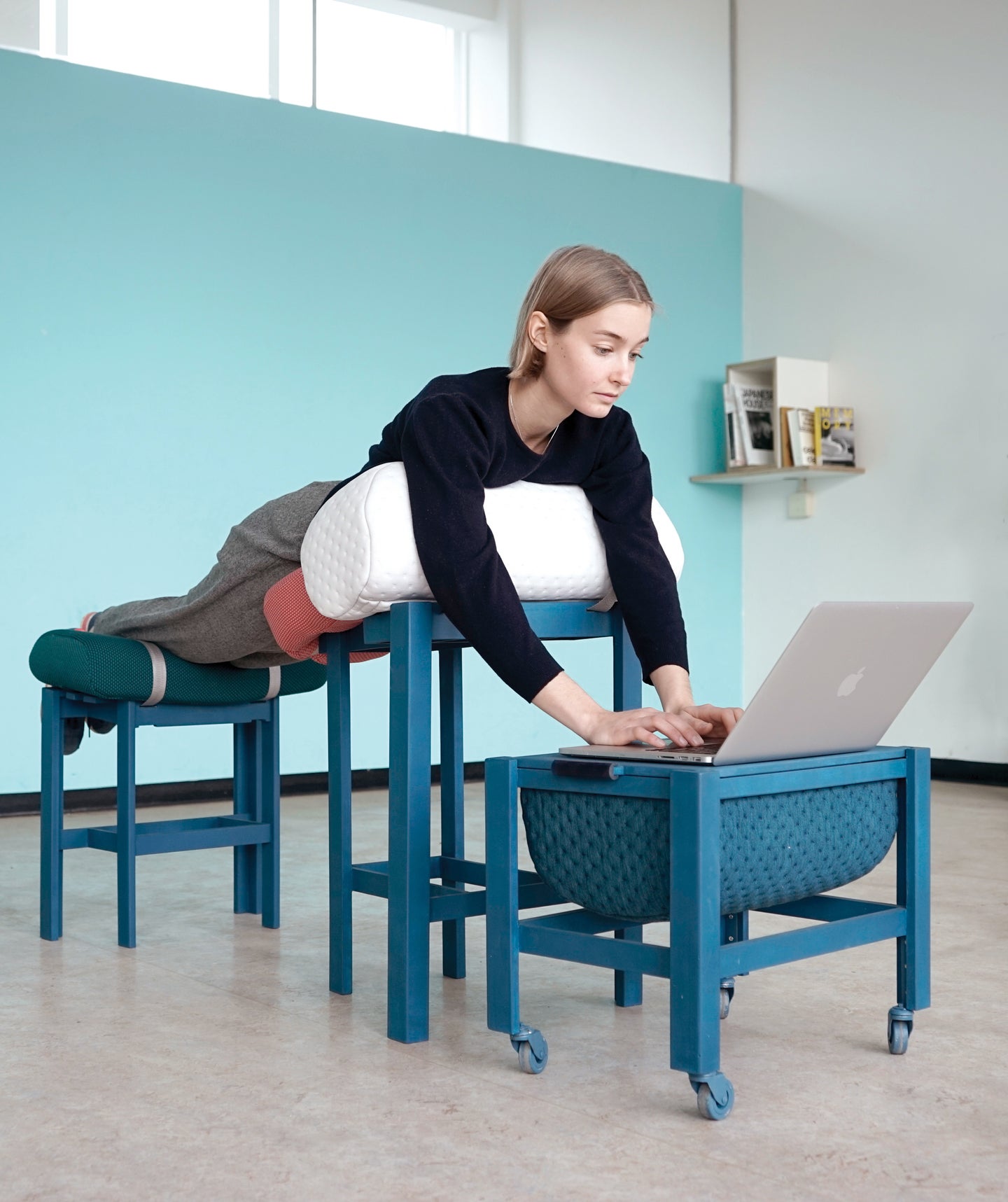 For some people, the daily grind of 9-to-5 is enough cause for the Sunday Scaries. But for a select group of others, it’s not the workload they fear the most come Monday morning—it’s their physical workspace.

Grafeiophobia—otherwise known as “fear of desk”—is, well, a real thing. While most of us wouldn’t categorize our dislike of sitting down all day as a phobia, we can all probably agree that sitting at a desk all day takes a toll on our bodies (and personal sense of sanity). That’s where French designer, Geoffrey Pascal, comes in. The recent design graduate has come up with not one, but three, savvy solutions to cure common desk dread. The name of his forward-thinking furniture collection? Grafeiophobia.

“The inspiration came from an article in MacGuffin Magazine on people working in their bed, explaining the pros and cons of it. I thought the subject was funny but also really interesting. I have a lot of difficulty focusing on work at a desk myself, so I decided to try to work in bed—experiment on myself,” says Pascal.

After working from home (well, more specifically, from bed) for a generous period of time, Pascal had an epiphany: Not only did his body feel better while sitting up in bed, but he was more productive. It was this revelation that ultimately inspired his three modular pieces of furniture: Basic Besk, Triclinium Gum, and the Flying Man. Each posture-improving piece is designed to emulate NASA’s Neutral Body Position, a zero gravity–like stance that reduces stress on the muscles, tendons, and skeletal system.

“NASA realized that when the astronauts were asleep in microgravity, their bodies continued to adopt the same sleeping position; the most natural one. It ultimately optimized their well-being and helped them maintain the long journey,” explains Pascal. “The three pieces I’ve created aim to emulate this research by dividing the weight of the muscular effort so people can work for longer periods of time without getting tired. The postures we adopt in bed are a step toward that.”

When standing desks hit the office scene, we thought we had seen it all. Now this? Wellness is officially on the meeting agenda.

Depending on the type of task you’re working on and the time of day, each piece of furniture in the Grafeiophobia collection is designed to be used for a specific amount of time—some only for a few minutes, and others for a few hours. And, no, despite their extra plush upholstery, they’re not designed for mid-afternoon naps. Here’s a brief break down of how each piece works.

This three-part configuration of cushy bolsters most closely mimics the feeling of sitting up in bed. Consisting of a three-cushion backrest, seat, and footrest, the Basic Besk is designed to be used for more serious tasks.

“Basic Besk is the most comfortable one—it’s a piece people can use for two to three hours,” shares Pascal.

If you’re happiest in the fetal position, this one will speak to you. Triclinium Gum includes a slanted mattress to allow the user to rest on one side with a bonus table charmingly dubbed the “Popsicle,” which can be used as a desk of sorts or as a support to lean against while standing.

Given that it’s only designed to be used for five to 30 minutes, think of Triclinium Gum as the transition piece in the group—the spot you’ll want to retreat to when you’re only pretending to do work and really scrolling through Facebook instead.

“It’s made for brainstorming and getting organized,” suggests Pascal.

Once the clock strikes 4 pm, the Flying Man will be there to rescue your EOD blues. Designed to re-create the feeling of lying on your stomach in bed, this is the piece you save for when the fatigue starts to kick in. The recommended use time for this piece is one hour.

“The idea is not to have one item of furniture that really fits you. It’s more about going from one place to the other and never getting bored,” says Pascal.

The designer’s hope is that one day posture-conducive pieces like this will replace desks and chairs all together. “I think the most difficult thing we’re fighting now is our culture. We need to understand there is not only one way of working. More people now are only working with their laptop or tablet, and if we don’t need a desk, then we should make room for furniture that’s more comfortable,” he adds.

While Pascal is still looking for a company to kickstart Grafeiophobia into production, it’s clear the designer has his eyes set on the future of workflow. In the meantime, use this as an excuse get up and move around the office. Chill out on the nearest sofa, stand up if you can, or even sit on the floor. When you keep your body moving, your brain will follow.

This Celeb Is Releasing A Furniture Collection Inspired By Ancient Egypt

You’ll Wish You Worked in One of These Offices