This Celeb Is Releasing A Furniture Collection Inspired By Ancient Egypt

The collaboration with Bernhardt Design marks the actor and football player’s first venture into design. 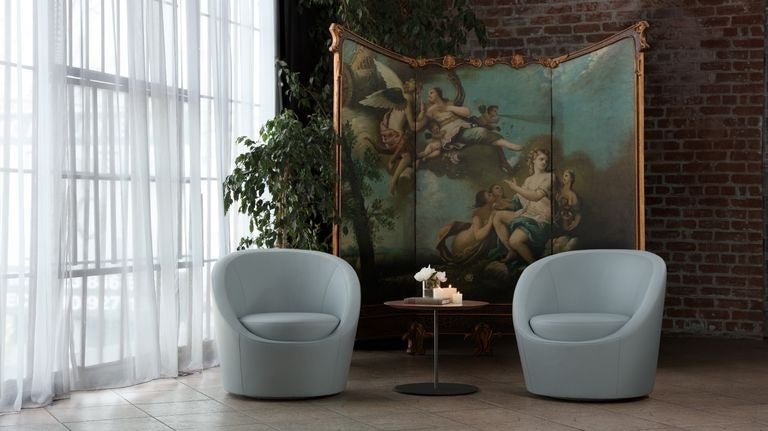 He stars in Brooklyn Nine-Nine as Sergeant Terry Jeffords, is a former NFL player, and now Terry Crews can add “furniture designer” to his ever-growing résumé.

Crews debuted his inaugural collection at the International Contemporary Furniture Fair this May, in collaboration with Bernhardt Design. The partnership is part of an ongoing initiative on the part of Bernhardt to work with people not exclusively in the design world —the international design company also recently collaborated with Airbnb co-founder Joe Gebbia.

The collection includes five designs, each reflecting a unique blend of modernity and Ancient Egyptian influence. Inspired predominantly by the Nile River as the center and source of life at that time, Crews created a collection whose pieces all draw from elements of the ancient world.

“When I began my collection, I was very aware of the significant influence of many modern contemporary designers,” said Crews in a statement. “My mind really started to expand when I began to explore fantasy elements of other cultures. I began envisioning what modern contemporary furniture would look like if Egypt was the dominant world power: ‘What would an evening in a luxurious, modern Egyptian palace look like?’”

The line, which is set to launch later this year, plays on forms of nature typically found along the Nile River. The Ibis sofa, an ashy blue leather couch, is named after the Sacred Ibis bird and is meant to resemble the extended wings of the bird in flight. The Float tables and Aire benches incorporate the “smooth rocks and pebbles along the shore of the Nile” through their irregular, organic design.

But the two pieces that make the biggest statement play off the design of the water lily. Lilypad, a lounge chair perched atop a walnut platform, and the complementing Lily Chair, “represent exactly what [the] name suggests,” says Crews. “The floating leaf of the water lily is culminated by a blooming lotus flower. The Egyptian sky god Horus was often depicted in ancient art sitting on the Egyptian Blue Water Lily. This image inspired the unique combination of an oval table, with a beautiful chair which appears to be a blossom rising above the table.”

Jerry Helling, the president and creative director of Bernhardt Design, tells us he was especially impressed by the knowledge of and commitment to design Crews brought to the collaboration. “When I first met Terry, we discussed how we could collaborate to support

up and coming designers

. The more we talked, the more evident Terry’s passion for art and design became. Terry had an incredibly strong vision for the collection from the beginning!”

However given the actor’s past, this passion is not as surprising as it might originally appear. Prior to becoming an NFL athlete, Crews originally wanted to pursue design. He attended Western Michigan University on an art scholarship, and even worked for a small firm during his off time.

“I’ve always kind of been in that [art] world,” he says. “I call myself ‘the unicorn,’ because I saw no difference between being an athlete and being an artist, but a lot of people thought it was either/or. I never agreed with that.”

More recently, he went to Milan as a patron to designer Ini Archibong and even cofounded a design label, Amen&Amen, last year in partnership with fashion designer Nana Boateng. The collaboration with Bernhardt is the actor’s first official design venture, and we can’t wait to see more. The collection will be officially available for everyone this fall via Bernhardt Design’s independent design retailers nationwide.