inside the home and studio of georgia o’keeffe

Tour the home and studio of legendary artist, Georgia O'Keeffe. 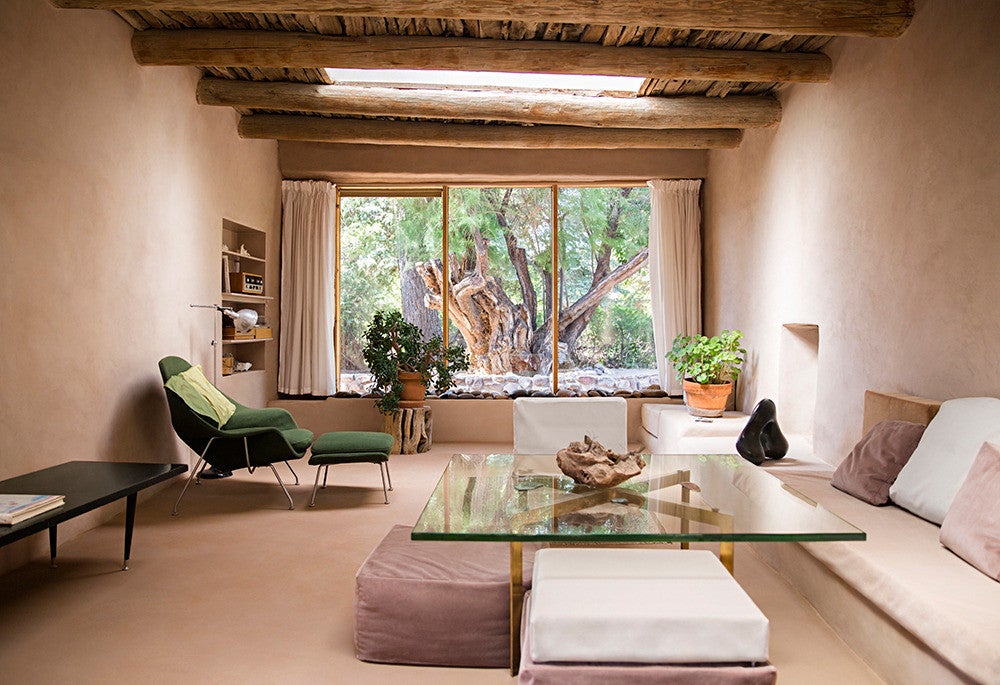 When the painter moved to Abiquiu, New Mexico, in 1945, she transformed a traditional adobe structure into the ideal setting for her iconic imagination.

Through a paneless window, the artist’s 1946 sculpture Abstraction can be seen in the home’s Roofless Room.

When Georgia O’Keeffe, an artist whose canvases captured the austere beauty of the Southwest, purchased this Pueblo Revival–style hacienda in 1945, the roof had collapsed in many spots, allowing nature to lay waste to its adobe walls. Though the 5,000-square-foot structure needed extensive rehabilitation, the painter was attracted to its three-acre parcel of land, which offered stunning vistas and ample space for O’Keeffe to grow her own fruits and vegetables.

O’Keeffe’s studio and sitting room came outfitted with a daybed for afternoon naps. Southwestern architecture and modern furnishings made for a compelling combo.

To oversee the home’s restoration, O’Keeffe called upon her assistant, Maria Chabot. While Chabot was responsible for the layout of the studio, home, and garden, the style of the interior was dictated by O’Keeffe. Her initial design showcased white walls and bare surfaces, but by the early 1970s, she’d begun to experiment with soulful earth tones. Though her tastes continued to evolve, her preference for sleek, modernist furnishings never wavered. Like all of O’Keeffe’s homes, Abiquiu displayed the same flair for rigorous simplicity evident in her paintings.

In the dining room, traditional touches abound, including the original rafters (vigas), a mud plaster floor, and a Navajo rug. Providing unexpected contrast, a Noguchi lamp (a gift to O’Keeffe from the artist himself) hangs above the table.

The studio’s views of the Chama River Valley served as inspiration for approximately 30 of O’Keeffe’s paintings.

O’Keeffe lived in her Abiquiu house for only half of each year, spending the rest of her time at nearby Ghost Ranch. After its renovation, she saw the Abiquiu hacienda as the more comfortable and welcoming destination. “When I bought it, it was totally uninhabitable,” she once told a reporter. “Architecturally, it is not a masterpiece, but a house that grew.” With its abundant light and sweeping views of the Chama River Valley, the residence became more than a retreat. It became the inspiration for much of her greatest work.

“As soon as I saw [New Mexico], that was my country. I’d never seen anything like it before, but it fitted to me exactly. There’s something that’s in the air.” —Georgia O’Keeffe

The zaguan’s eclectic decor includes a massive rack of elk antlers, an emerald-toned Mexican lebrillo (washbasin), and a selection of rocks from O’Keeffe’s extensive collection.

Beside the entrance to the book room at Georgia O’Keeffe’s house in Abiquiu, New Mexico, a ram’s skull is placed atop a log. It’s a simple yet powerful pairing that somehow recalls both O’Keeffe’s Southwest-inspired canvases and the kind of classical sculpture you might see at the Met. It’s also a reminder that art doesn’t have to be purchased from a gallery. Sometimes, masterpieces are made merely by keeping our eyes open to the sculpture that surrounds us and by relating to the natural world with a well-deserved awe.