The Manhattan home of not just Emma Stone, but also Courtney Love, Andrew Garfield, and even Glenn Close is now priced to sell. 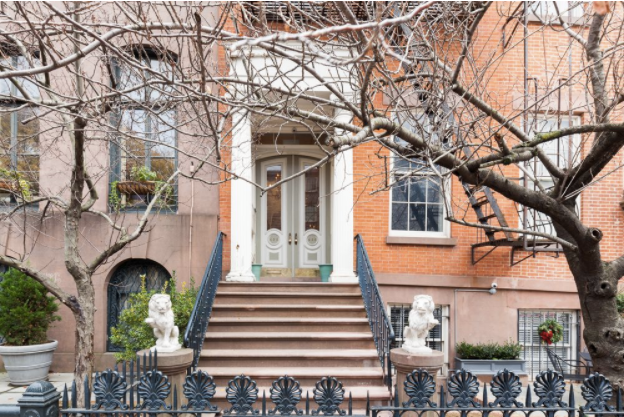 The Manhattan home of not just Emma Stone, but also Courtney Love, Andrew Garfield, and even Glenn Close is now priced to sell.

Courtney Love lived here. Emma Stone and Andrew Garfield shacked up here. Even Glenn Close and French banker Olivier Sarkozy (a.k.a. Mr. Mary-Kate Olsen) called it home for a time. The walls of 436 West 20th Street in Manhattan’s Chelsea neighborhood would have some stories to tell if they could talk—and now it can be yours for a bargain!

Well, “bargain” is a relative term when you’re talking about five and a half stories of Greek Revival townhouse with an elevator, roof deck, two balconies, functioning fireplaces, and rear and front patios. The whole townhouse is currently listed at $19,750,000 at Cushman & Wakefield, but that’s actually a good price given the neighborhood and potential.

The reason the celeb-loved property hasn’t sold is most likely due to the fact that it’s walled up for five separate apartment units instead of the single-family living space it could be. The five separate units are also why so many celebs have passed through its doors in such a relatively short span of time.

The cost of conversion has led to several markdowns over the years. Nonetheless, it’s a fine fixer-upper for those with the spare capital and will. Mere yards from the Highline, Chelsea Piers, and the surrounding gallery district, its value can only go up after conversion. You’d be a fool not to buy it, and you’re not a fool, right?

Click over here for more shots of where Courtney, Emma, Andrew, Glenn, Olivier (and Mary-Kate?), once chilled.