A 19-Year-Old Is Behind NYC’s Latest ‘It’ Restaurant

Flynn McGarry proves that fine dining doesn't have to be stuffy. 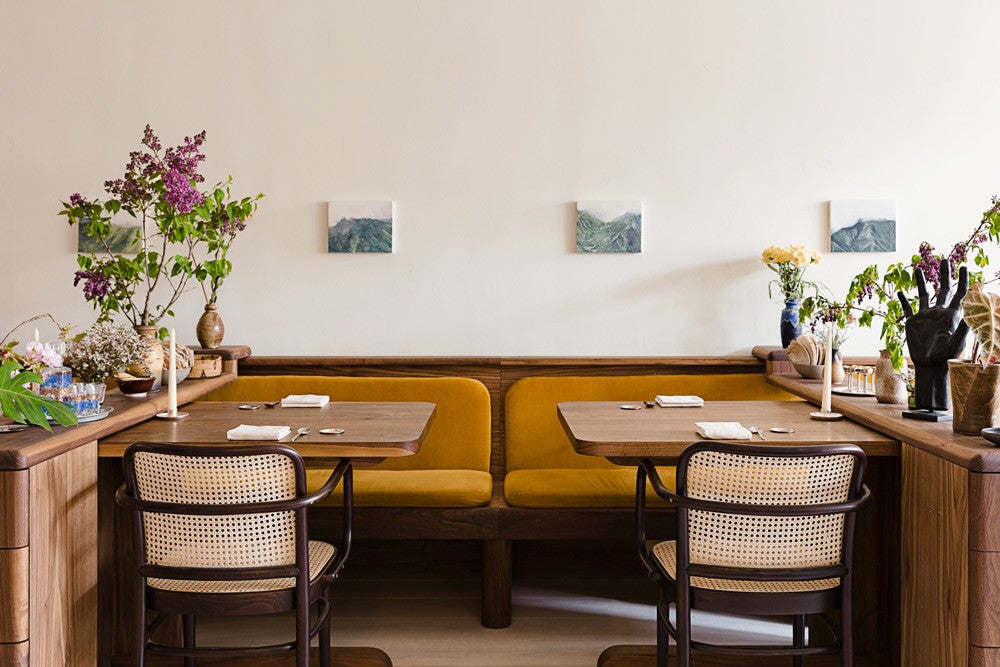 While most 19-year-olds are just beginning to think about what they want to do with the rest of their lives, Flynn McGarry was already envisioning how he wanted to design his very first restaurant. But McGarry is not your regular teenager. He’s been making waves in the food industry since he was just 12 years old, when he started hosting pop-up dinners in New York and Los Angeles, and at the ripe age of 15, he boldly stated that he wanted to open “the best restaurant in the world.”

His first restaurant is finally here—it opened in February of this year—and while it may not yet hold the best-of title, it is proof that the young culinary prodigy also has quite the eye for design. Enter the clean, warm, and minimal space that is Gem, and you’ll immediately feel his keen attention to detail, purposeful decision-making, and intention behind all elements of the design.

The restaurant, located in Manhattan’s Lower East Side, consists of two distinct areas: a 16-seat dining section and a café-style living room. Warm finishes and a palette of mustards and deep wood give the space an inviting vibe, while the divided sections make it feel almost as though you’re in someone’s apartment, a nod to the at-home dinners that launched his career.

“I wanted it to feel like my dream apartment,” McGarry tells Domino. “I also didn’t want it to feel like you were necessarily in a restaurant,” he says. “Here, we’re able to serve intricate, complicated dishes in a setting that’s comfortable.”

And it’s that comfortable, accessible feeling that radiates throughout, thanks to McGarry’s keen eye and planned vision for the space. Though he has worked in several of the top kitchens in New York and beyond, the recently opened Gem is the chef’s first brick and mortar space.

It’s clear that his mindset for cooking translates to design. The Living Room is a bit of a neighborhood hangout, serving coffee and homemade pastries daily, while the Dining Room hosts McGarry’s beautifully crafted 12-course meals Thursday through Saturday.

“The way I think about food lends itself well to design,” says McGarry. “I thought of the space the exact same way I think of putting a dish on the menu. In cooking, you’re taking a blank plate and taking all these things and combining them nicely, but not messing with them too much, and in design, this space was kind of blank canvas. I approached it with the same philosophy.”

With a love of design and clear vision propelling him, McGarry enlisted the help of friend and interior designer, Brett Robinson, who came in to execute McGarry’s ideas and lend a similar aesthetic and design eye. The two are so similar, in fact, that they have the same haircut, so agreeing on design came second nature.   “Flynn had a pretty informed vision of what he wanted,” says Robinson. “We worked closely together on this, but it was mainly my expertise on executing the vision and some of the more difficult design details. It was a beautiful simple space that we made feel really honest and minimal. It feels comfortable, and the food sets the energy.”

Perhaps the most special part of Gem is the pure intentionality that went behind every design choice. McGarry handpicked everything in the space—from the ochre-colored corduroy on the banquettes to 1940s bronze lamps.

He admits to spending six months looking for the perfect chair in the living room, finaly settling on a 1950s style wood chair in an aged yellowish pine. A huge Persian rug (Brett’s choice) grounds the living room area, almost making you forget you’re in a public space.

Crisp white walls and light, neutral flooring make the other elements of the space pop. The leather on the banquettes is aged in a way that makes it look like its been there for years, while cozy textiles exude a sense of warmth and ease.

The home-y aesthetic flows into the dining room space, which hosts $155 (tip included) prix fix dinners for around 16 people per night. Besides the simple, elegant food, the tables take center stage here. Custom-built and designed, they are a work of McGarry’s incredible eye and imagination and are unlike anything you’d probably see in a typical fine dining establishment.

Catering to the experience of community, McGarry was inspired by a restaurant in France where the tables were divided by a bookcase. The modular tables he thought up feature a divider that can turn a four-person table into two two-tops, or can be moved around to accommodate larger dining parties. It’s a beautiful, and kind of genius, small space solution.

The tables contribute to the ambiance of the dining experience because while you’re not at a communal table, it kind of feels like you are. There’s a level of separation where guests can talk to their neighbors, but don’t necessarily have to feel obliged.

As Robinson noted, “The space doesn’t take itself too seriously. You can go to a million different fine dining restaurants and have the same kind of experience, but here it’s all about community, friendship, family, and good design.”

Moreover, McGarry was adamant about there not being any sharp edges in the dining room, so all the custom-built tables are slightly rounded on the ends. “I wanted it to feel like there was movement in the space,” he says.

The entire experience is centered around a feeling of community and high-quality food. McGarry says that instead of trying to do it all, his space works with the specific concept of what he does. With food and comfort at the center, the rest is simple and adaptable. Instead of changing with the season, Gem changes with the way the sun hits it, the way the guests interact with it, and the way the food caters to the ambiance.

And while the ring stains from coffee mugs start to spot the the tables and the light colored floor gains a few more scuff marks, the character of Gem will evolve, feeling more and more lived-in, comfortable, and that much more like your friend’s apartment. It’s an organic quality that can’t quite be designed, but was another intention of McGarry’s: He wants the space to age with him, and age well.   “As he grows into this world class chef that he is,” says Robinson, “the space is evolving with him.”

Gem is located at 116 Forsyth Street in Manhattan, New York.