You’ll be transported “Out East” all fall long. 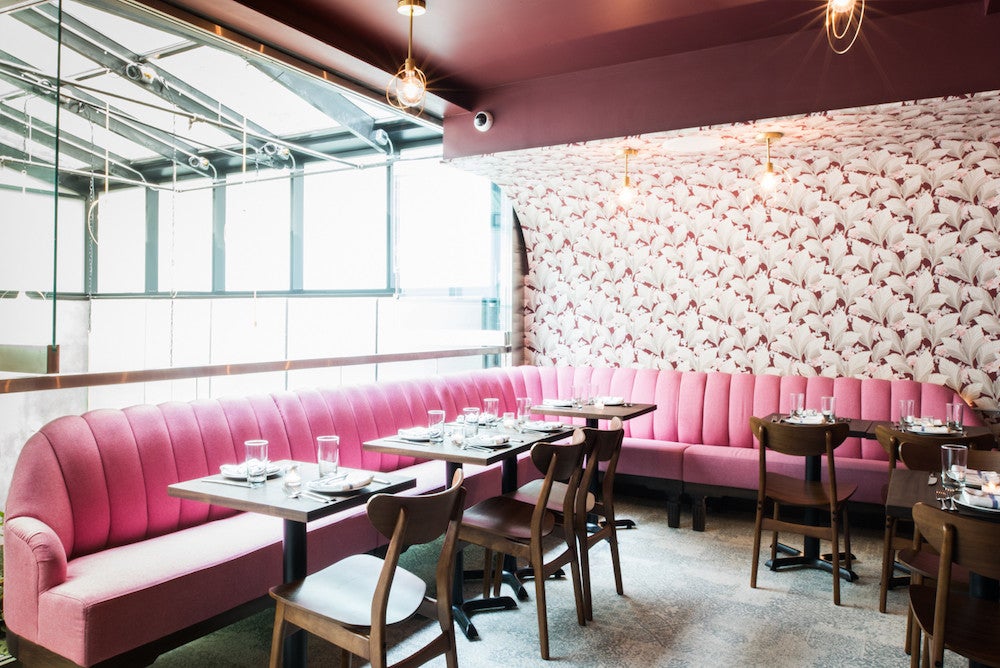 Photography by OUT EAST

Summer’s all but over: Your old sweaters are making their reappearance, leaves are starting to change color, and your memories of long days spent by the pool or beach are fading away. But they don’t have to.

For Anthony Serignese of Casual Hospitality, this was one of the inspirations behind his new NYC restaurant, Out East. It’s his company’s first venture, and Serignese—previously of hotspots Stanton Social and Beauty & Essex—wanted to create an area that conceptualized that fun, beachy vibe.

“I want people to feel transported Out East, to feel the energy. Whether they’re having brunch on a sunny and beautiful day or dinner under our star-like light fixtures sparkling in the atrium, the vibe of being Out East should resonate. My word for it? Casual elegance,” Serignese tells Domino.

And that vibe shows all over, from the the on-trend, millennial pink banquet table to the soft, pale blues that run throughout the space. “The pink and blue colors are bold choices intended to transport guests to the beach right away. The blue represents the water, and the threadbare pink banquets evoke a beach blanket,” says Serignese.

The 124-seat, bi-level area therefore takes advantage of its sunny location with a massive skylight, while light walls serve as the perfect canvas for the rest of the space. The limited-edition 1855 map of Long Island Sound further encapsulates the beachy themes of East Hampton and Montauk, while another area boasts a louder style with the addition of pink, floral-toned wallpaper.

“The wallpaper was taken from a specific color spectrum we were trying to nail—the inspiration behind the nautical saying, ‘Red sky at night, sailors’ delight,’ which refers to a specific type of ocean sunset that has very true reds and less orange, specifically,” says Serignese.

The reddish hues are evident under the soft white patterns, and the modern, Art Deco-inspired lighting spotlights the pink undertones. The hardwood chairs from West Elm, which Serignese says are one of his favorite decor decisions, play off the bold colors and add an elegant touch to the area as well.

Paris was also a major source of inspiration behind the restaurant: “Years before I’d ever traveled there, I was infatuated with the city,” says Serignese. “I had enjoyed products, seen pictures, and read at length about the food and wine culture of Paris. I’d had the same romantic notion about Montauk and the Hamptons long before having ever been there. This idea of what it might be like is where the concept and design began. The space eventually began to emulate both the idea, and also my personal experiences spending time out east.”

He combines these different vibes perfectly in the area of the restaurant that boasts two different kinds of flooring—white and grey hexagon-shaped tiles transition into curvaceous wooden slabs. “The tile had to be laid just right for it to work, and on a snowy January day, I laid the tile and mapped it out piece by piece,” says Serignese, who calls this his biggest accomplishment. “We also got very lucky and found a wood flooring contractor who had done a similar transition before. I still love looking down at that floor every day.” And obviously, it isn’t a coincidence those blue-hued tiles remind you of waves crashing on the shore.

The downstairs, beach-inspired bar adds to the airy theme, but with a twist—while the subdued colors are at odds with the rest of the decor, the modern hanging lights, chic bookshelf, and plush seating add a homey feel to the area. Serignese is also quick to point out the Beach House Bar was his biggest challenge, due to how cramped the area appeared initially.

“A small, low-ceiling space, which was arguably the least desirable real estate in the restaurant, needed to become one of the most desirable spaces. And I think we achieved that,” he affirms.

As for ways you can incorporate this breezy theme in your own home? Try some of Serignese’s favorite picks from the space—the antique flannel blue carpet from Flor, the Designtex fabric for the banquets, and the exquisite, 1970s vintage credenza from Charish.