$10K Later, This Reimagined Garage Is Fit for Nights by the Fire

In the corner: a full-on cocktail-making station. 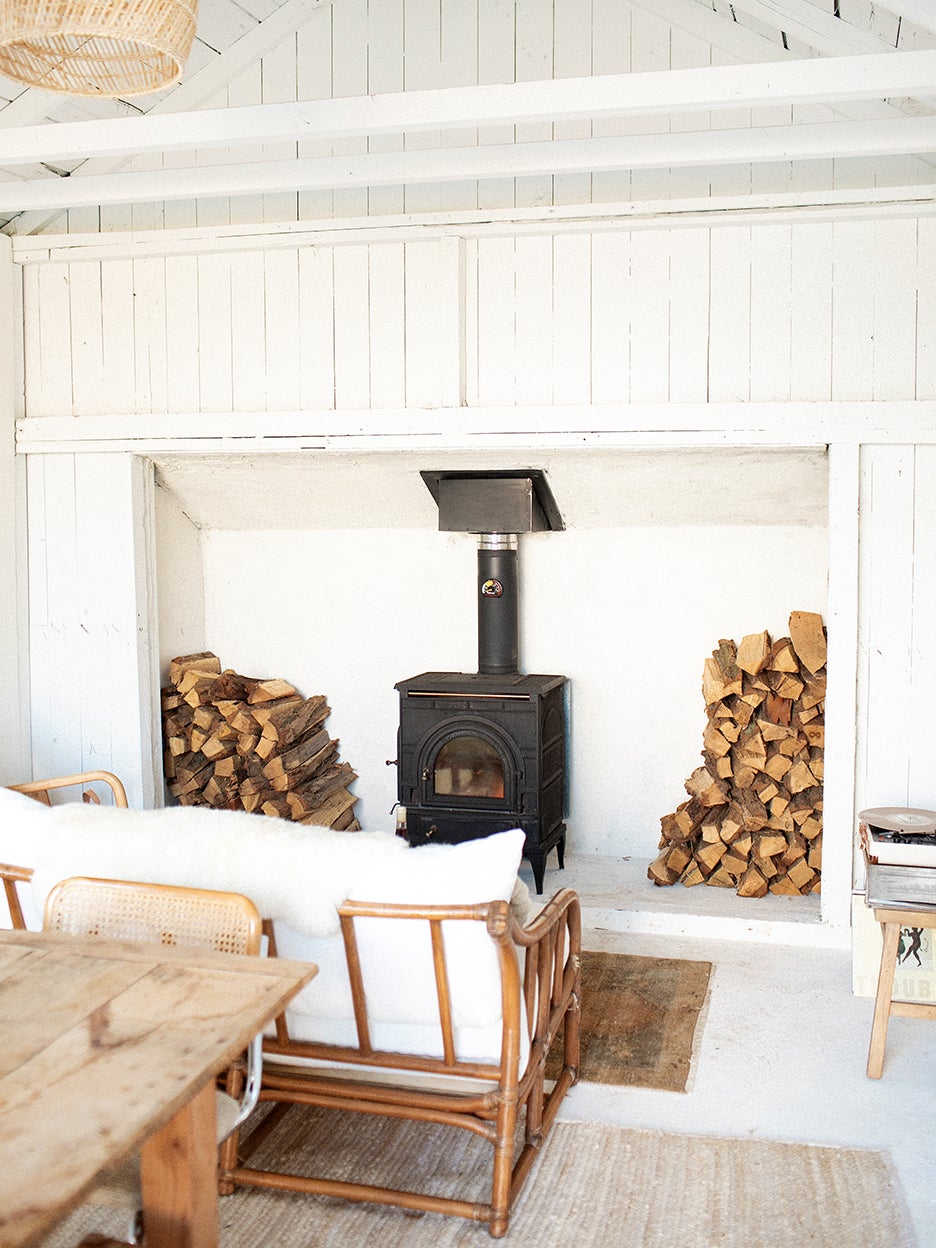 Crowbar in hand, Veronica Grimm set out on tearing up her already-cracked asphalt driveway. “It was actually pretty cathartic,” says the self-proclaimed doer (when she has an idea, she goes full throttle). The Long Branch, New Jersey–based wedding photographer eventually realized she’d have to call in professionals, but it would be one of the few jobs she and her husband would hire out as they dove into their garage renovation (fixing up the driveway was just the tip of the iceberg). “It was a true labor of love,” she says, laughing.

Fast-forward six months after literally breaking ground on the project, and there’s lush grass where there was once a sea of asphalt, and a custom carriage door takes the place of the old roll-up aluminum one. But the biggest changes happened inside. Rather than being fit for a car, the now-pristine white interior is prime for cocktail hour. With most of her events rescheduled because of the pandemic, Grimm’s salary had been wiped, so she chipped away at the space slowly with the help of handy friends and family. The all-in cost ended up being $10,000, which was a major save compared to the $24,000 a contractor originally quoted them. Read on to learn how they took the space from dilapidated to dinner party–ready.

Grab Your Shovel (and a Dumpster) 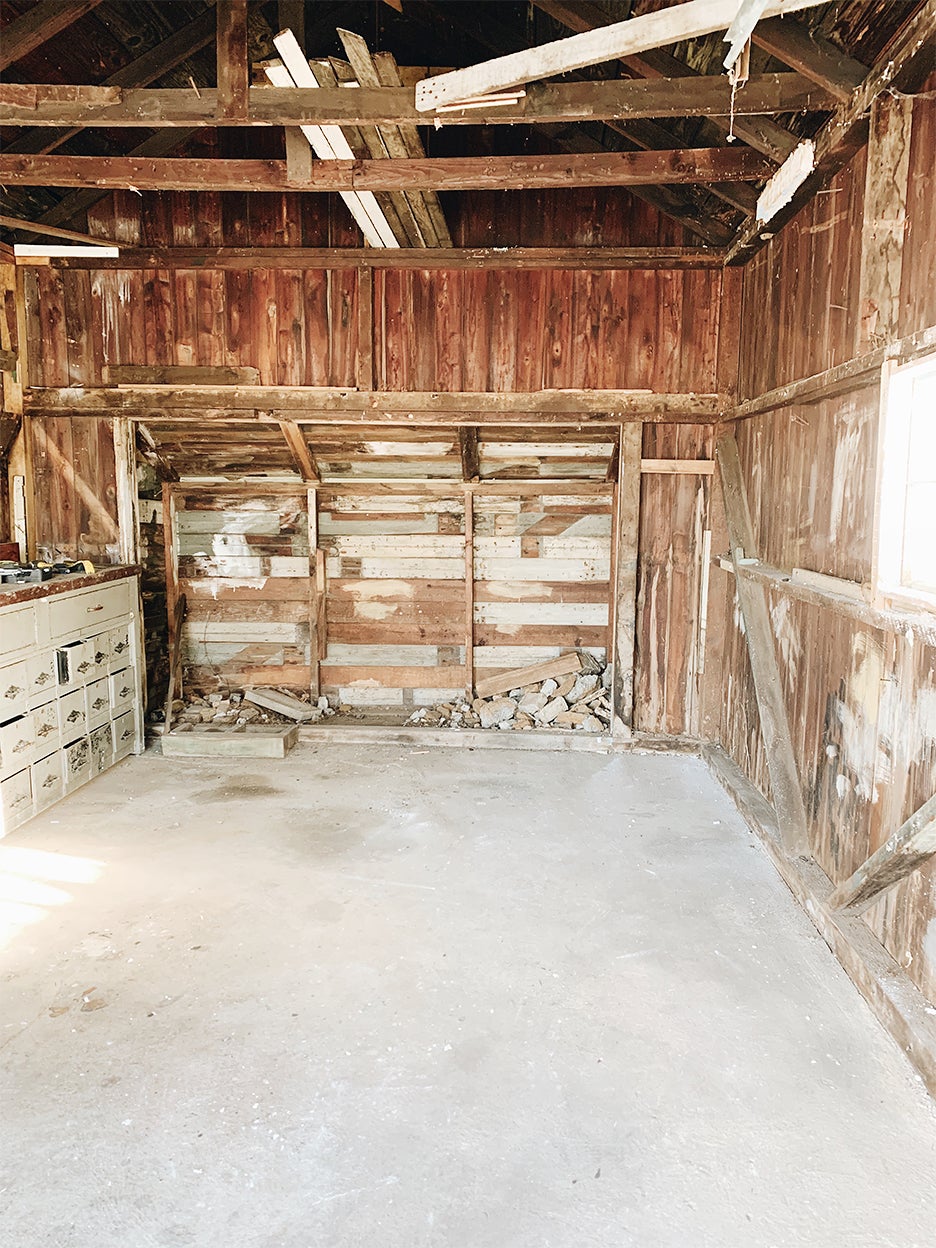 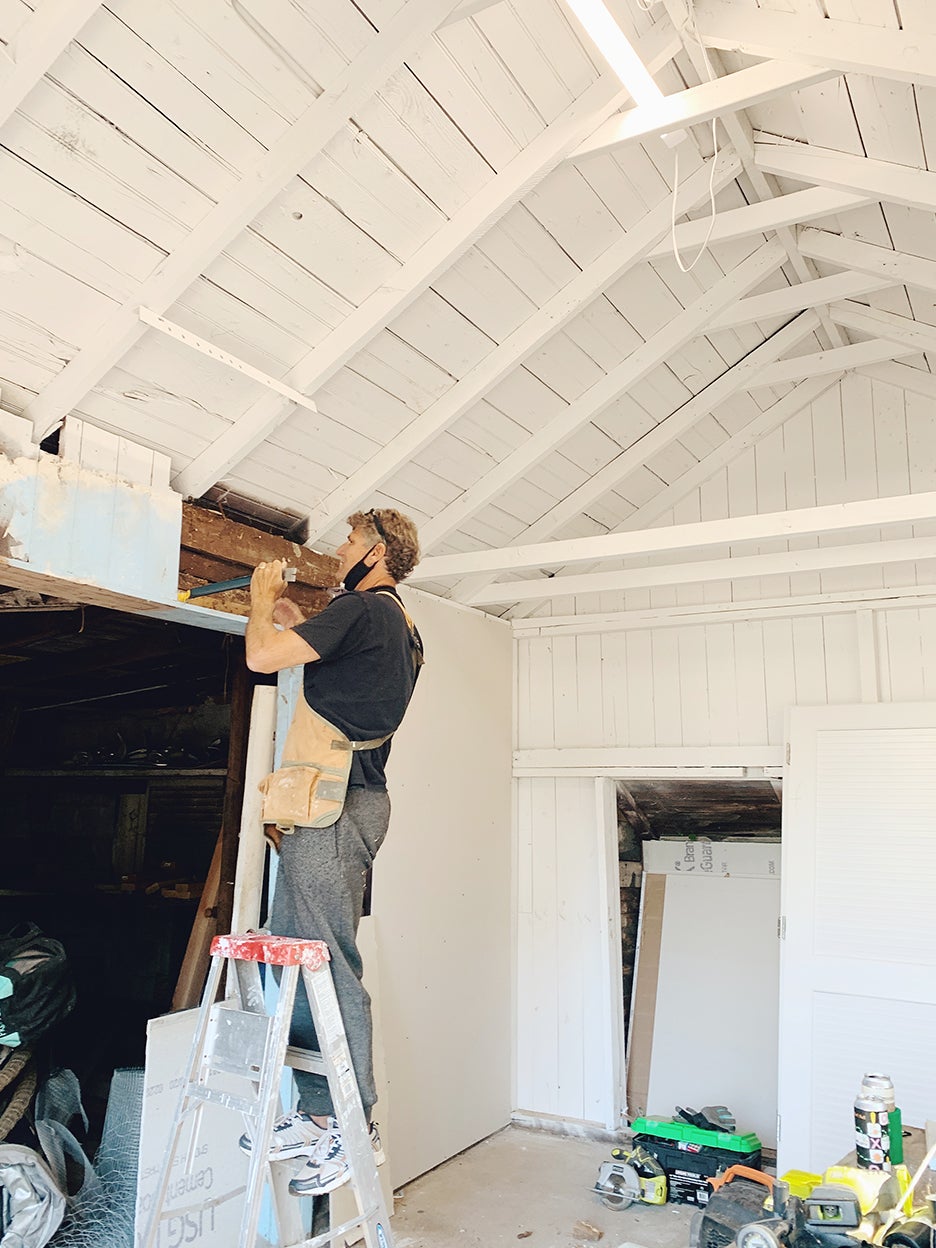 Step 1 was ordering a container to dump all of the old siding the previous owner had left behind. Plenty of other rubble from the old drywall and ceiling ended up in the dumpster, too. “It was a big cleanup,” recalls Grimm. With a fresh slate, they worked on getting electricity to the building. Grimm’s husband took it upon himself to dig the trench in order to save on labor costs. “I think he lost five pounds from the sweat of doing that job,” she says.

Leave a Homey Stamp of Approval

The awkward bump-out spot at the far end of the garage (probably intended for the hood of a car) now was the perfect place for a wood-burning stove, which the pair got secondhand from Grimm’s father, who helped with the installation. “He was a rock star,” she says. From drilling holes through the roof for the venting to getting proper clearance from the county, the process was almost as complicated as getting the 400-pound thing to Grimm’s house from her parents’ place. “We can laugh about it now,” she says. 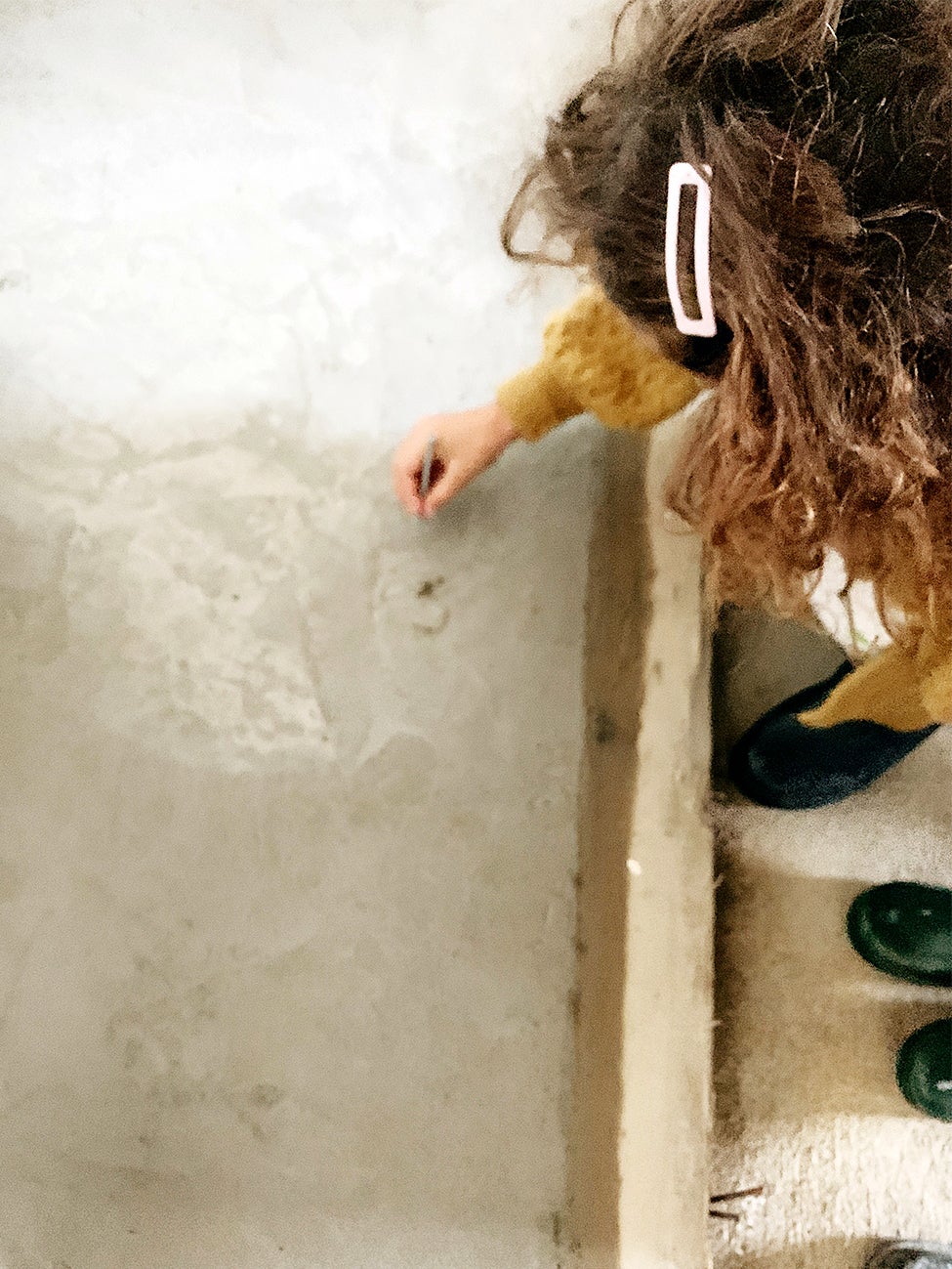 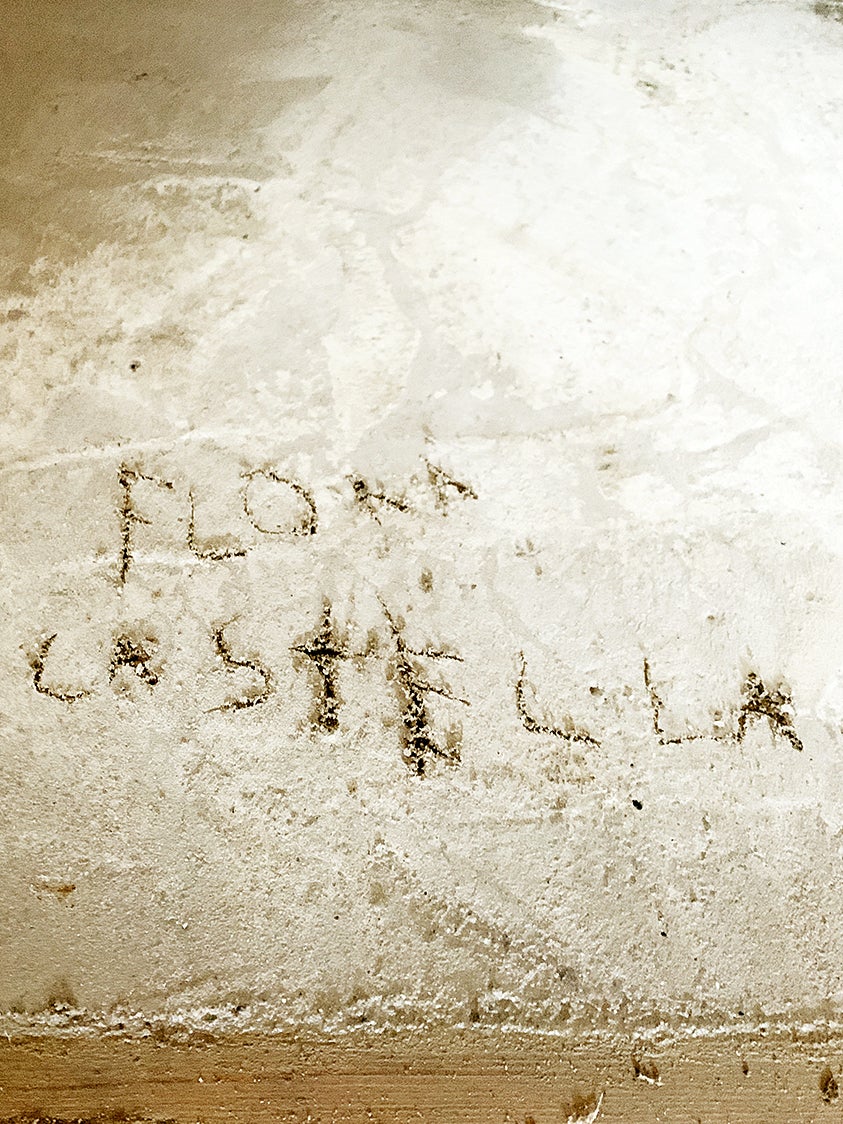 The photographer’s 5-year-old daughter scribbled her name and her 2-year-old sister’s name in the wet cement using their great-grandfather’s tools.

Look Past the Paint Aisle

Because the existing wood on the ceiling was so dark, Grimm covered it with a heavy-duty oil-based white primer from Kilz (no paint necessary). For the walls, she was inspired by the earthy facades of buildings in seaside Mediterranean towns. She achieved a textured look by applying Spackle to the finished drywall and then painting everything with a limewash finish. “The original plan was to use stucco, but the whole process was already taking too long,” she says.

The nearby closet leads to the left side of the garage, which holds all their tools and garden gear. Next on the agenda is turning the nook into a kitchenette, complete with a kegerator.

Get Rid of Garage Giveaways

The new carriage doors (one of the bigger splurges) were custom designed by the couple’s close friend and local craftsman John Achilli of Content Woodworking. While Grimm had originally intended to paint the facade, they ended up keeping the natural wood and just staining the central panels. “It’s one of my favorite parts of the garage now,” she says.

These days you can find the family gathered around the handmade Amish pine dining table (an $80 Facebook Marketplace find) or taking advantage of the bar setup in the corner during adult-only gatherings. Grimm, a former bartender, splurged on Italian glassware and ceramics (“We take our cocktail making seriously”). In the future she hopes to rent out the reimagined garage for photo shoots, workshops, and even yoga classes. “But right now it’s just been a game changer for us. Like our own little escape in a way,” she says.