From a lounge chair to a learning tower, his pieces “help kids help parents.” 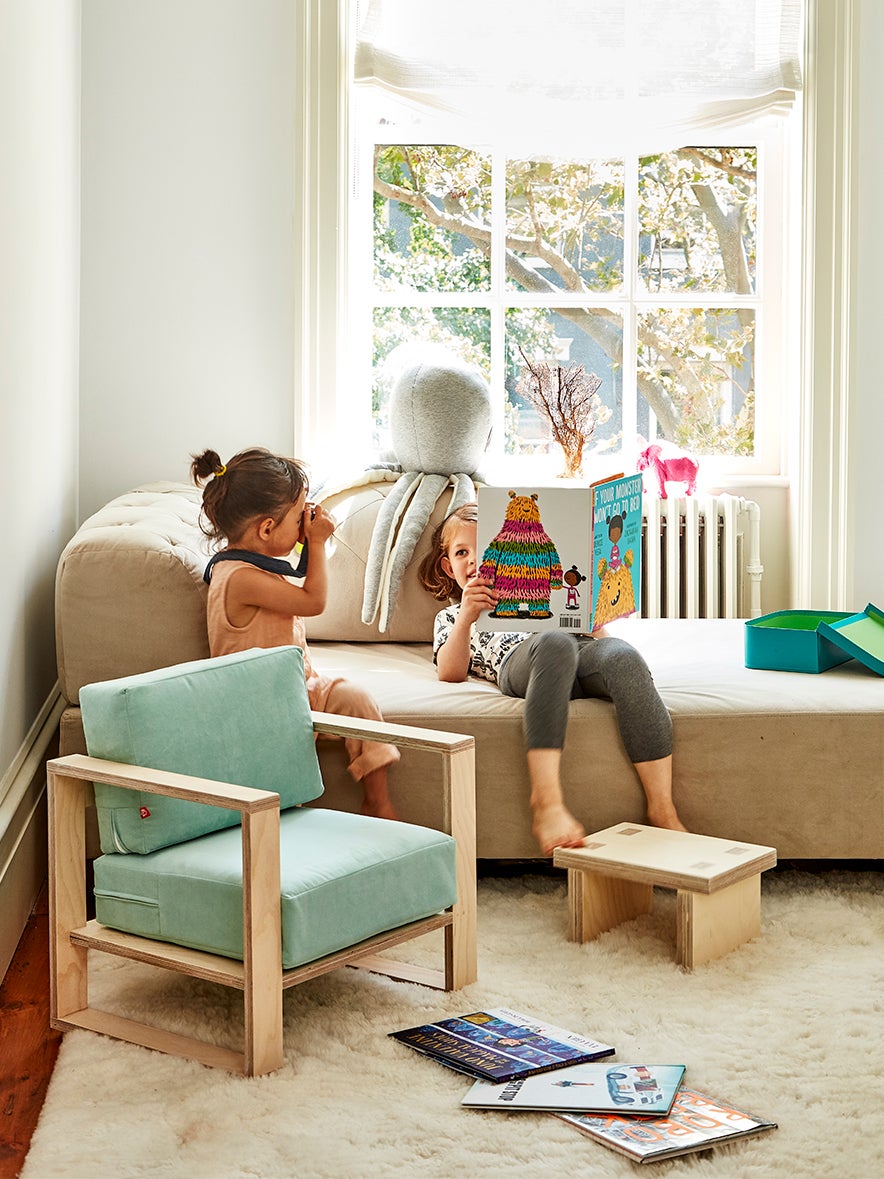 As a toddler, David Mawhinney’s daughter, Frances, now 4, would tiptoe into her parents’ bedroom every morning and perch up on a printer to watch them slowly wake up. “When you’re 2 years old, everything is a seat,” he says, laughing, as he remembers these early-hour scenes. As Frances grew older (and taller), she gradually broke every part of the device: the output tray, the sheet feeder, the paper holder. So Mawhinney did what any resourceful father would do: He built his daughter a chair out of wood that he found in the basement of his Brooklyn apartment.

Two years later, Mawhinney, who previously had a decade-long career as a chef, now spends his days making kids’ furniture at his company, Franklin + Emily, coined after his kids’ middle names (he also has a son, Desmond, 8). During the lockdown, Mawhinney pivoted to quarantine-friendly solutions for families living in small spaces. Ultimately his goal is twofold: to create stylish, sustainable pieces that can live outside the playroom and to “help kids help parents” by allowing little ones to become more self-sufficient. (Upcoming offerings will include thin, wall-mounted bookshelves, coat hooks, and the holy grail of kids furniture: toy storage). Here are the hero designs that have simplified his own family’s life these past few months—learning tower included.

The Chair That Started It All

“Kids don’t sit in chairs like adults do,” says Mawhinney, who studied how his own children would precariously hang over the edge of their seats before drafting his first prototypes. He designed them to be stable enough not to break or tip over and sturdy enough to withstand a 200-pound grown-up. “Friends who came over for dinner would sit in them afterward and be so impressed at how comfortable they are,” he notes. Mawhinney’s hope is that these chairs will become family heirlooms—staying with kids all the way into their teenage years and being dug up again for their own children.

Back in March when Desmond’s school shut down, Mawhinney quickly realized that the dining room table wouldn’t cut it as a workspace for the whole family, so he went back to the drawing board and designed a compact desk set. “Every morning, it would take 15 minutes to grab the pencils, the notebooks, the chargers, the tablets,” he remembers. Mawhinney polled his son to figure out exactly what type of storage he’d need: a holder for pencils, glue sticks, and scissors; a place for his water bottle; holes for chargers and cables. The best part: It cut their morning routine in half. “The kids like the structure of it,” says Mawhinney. “They know that when they’re at their desk, it’s time to focus.”

The Step Stool With No Fixed Address

Another item Mawhinney created out of necessity was a little step stool that wasn’t made out of plastic like most available options. To make it ultra-mobile, he designed a slender but sturdy base so Frances could easily drag it around the house as she needed to reach for things on top of her dresser, grab a snack in the kitchen, or brush her teeth at night. “It became her little helper that would give her this leg up and allowed her to do stuff she would otherwise have been too small for,” he explains. Montessori principles, which promote independence and agency, were very influential in all aspects of the design.

Time spent in the kitchens of New York establishments like Daniel and Per Se influenced Mawhinney’s latest invention. He would ask his chef friends, “Hey, you have kids that are the same age as mine; how do you cook with them?” Quickly, he realized that most parents used Band-Aid solutions that ranged from propping their children on the kitchen island to having them stand on unsafe stools and chairs. The learning tower, with its adjustable steps, keeps little ones secure with a sturdy leather strap and allows them to stand counter-height like adults. “I’ll give my daughter a pair of scissors so she can cut the stems off green beans or help cook eggs on the stove,” says Mawhinney. “Around dinnertime, she just automatically assumes that she’s going to be my sous-chef.”