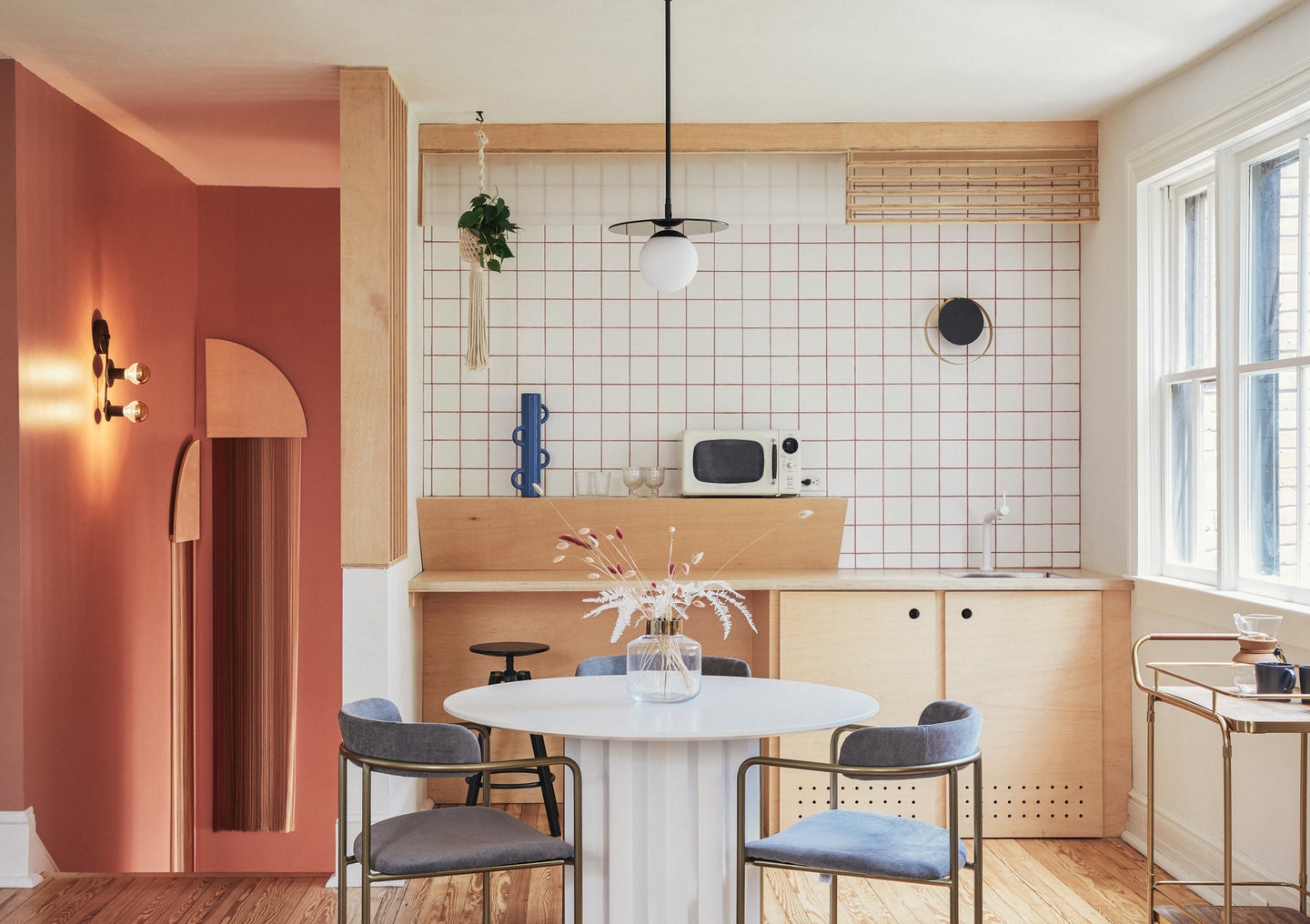 When Stephan Watts first landed in Wilmington, North Carolina, it was peppered with traditional bed-and-breakfasts in stately Victorian homes. Many were a little stuffy and hadn’t been renovated since the 1990s. Still, he fell in love with the historic coastal town and went house shopping on a whim. That’s when he stumbled upon what is now Dreamers Welcome, a whimsical, light-filled boutique hotel (think: ’80s tropical vibes) opening this week.

“We wanted to create a merger between an Airbnb and a traditional bed-and-breakfast,” explains Watts, who gut-renovated the property in just nine months with his partner, artist Roy Delgado. The pair’s first hotel, the Dreamcatcher, opened in San Juan, Puerto Rico, in 2013. “We had no clue what we were doing back then,” says Watts. Now with more than half a decade of hospitality experience under their belt, the pair’s second project feels all grown-up—and it’s chock-full of wallet-friendly design solutions. Here are some of our favorites:

Use Affordable Materials in New Ways

When they first bought the house, which hadn’t been renovated since the ’90s, it felt very somber and austere, but the duo was determined to make it light and playful. “We were very inspired by the ’80s Miami  life,” says Watts. This, coupled with the Victorian architecture, make for unexpected combinations both in the color palettes and furnishings. In the bathrooms, for instance, affordable ceramic tile is paired with colorful grout and neon pink shower curtains from Quiet Town.

One of the things that charmed Watts about the house was the bright and airy feel. “From the outside, it looks like a tiny gingerbread house, but then you walk in and all the rooms have unobstructed views and amazing natural light,” he explains. To play that up as much as possible, the hotelier went as far as to create a custom headboard with two plywood wings in one of the rooms, so as to not obstruct the window. “For me, it was about how can we be thoughtful and minimal, and do this quickly and in a cost-efficient way that doesn’t look like we just slapped a piece of plywood on the wall,” says Watts.

Get Creative With Florals

Watts was lucky that his partner is an artist—he created the art and wall hangings for the entire hotel, saving them a lot of money. But the hotelier wanted to get creative with florals as well, so he called on his friend Marcos Toledo, a New York floral designer who created eye-catching arrangements for Brooklyn bars Ramona and Elsa, among others, for help. His masterpiece: a three-story stalactite-esque chandelier made with 500 preserved Amaranthus stems, which hangs in the staircase. In the parlor, another one of his creations hovers like a cloud above a pink tête-à-tête chair.

One of the easiest ways to keep costs low was to build custom furniture out of inexpensive plywood. “For me right now, it’s plywood everything,” says Watts, laughing. From headboards and closets to desks and even kitchenettes, the hotel is filled with pretty and practical pieces that add to its breezy charm.

Be Bold With Paint

On the lower floors, the walls are all finished in a subtle Venetian plaster save for the dusty pink parlor, but the top floors boast various bold color moments. “If you go up to the third floor, it gets a little narrow and takes a turn,” says Watts. The hallway, painted in a soft red, leads to a dramatic cobalt blue bedroom. “We wanted to create a womb. First, there’s this coral, floral craziness, and then you walk into the blue room, which has higher walls and windows, and it’s a completely different experience,” he explains. And it doesn’t get more affordable than a couple buckets of paint and some elbow grease.

Know Where to Splurge

Watts knew he had to get crafty with the decor, building inexpensive closets and purchasing furniture from affordable retailers like IKEA and West Elm. But he also knew that a few things warranted the splurge: an emerald seashell chair for the cobalt room, a pink velvet tête-à-tête for the parlor, and a trio of marble poufs that are dispersed on the ground floor. “We got them on 1stdibs from an Italian maker and they were $900 each. That was the moment when I thought, Okay, I lost it a little bit—but I just had to have them,” recalls Watts. It goes to show that no matter how tight the budget, the occasional frivolous purchase is what really elevates a space.