Soaring ceilings pave the way for a primary-suite reno. 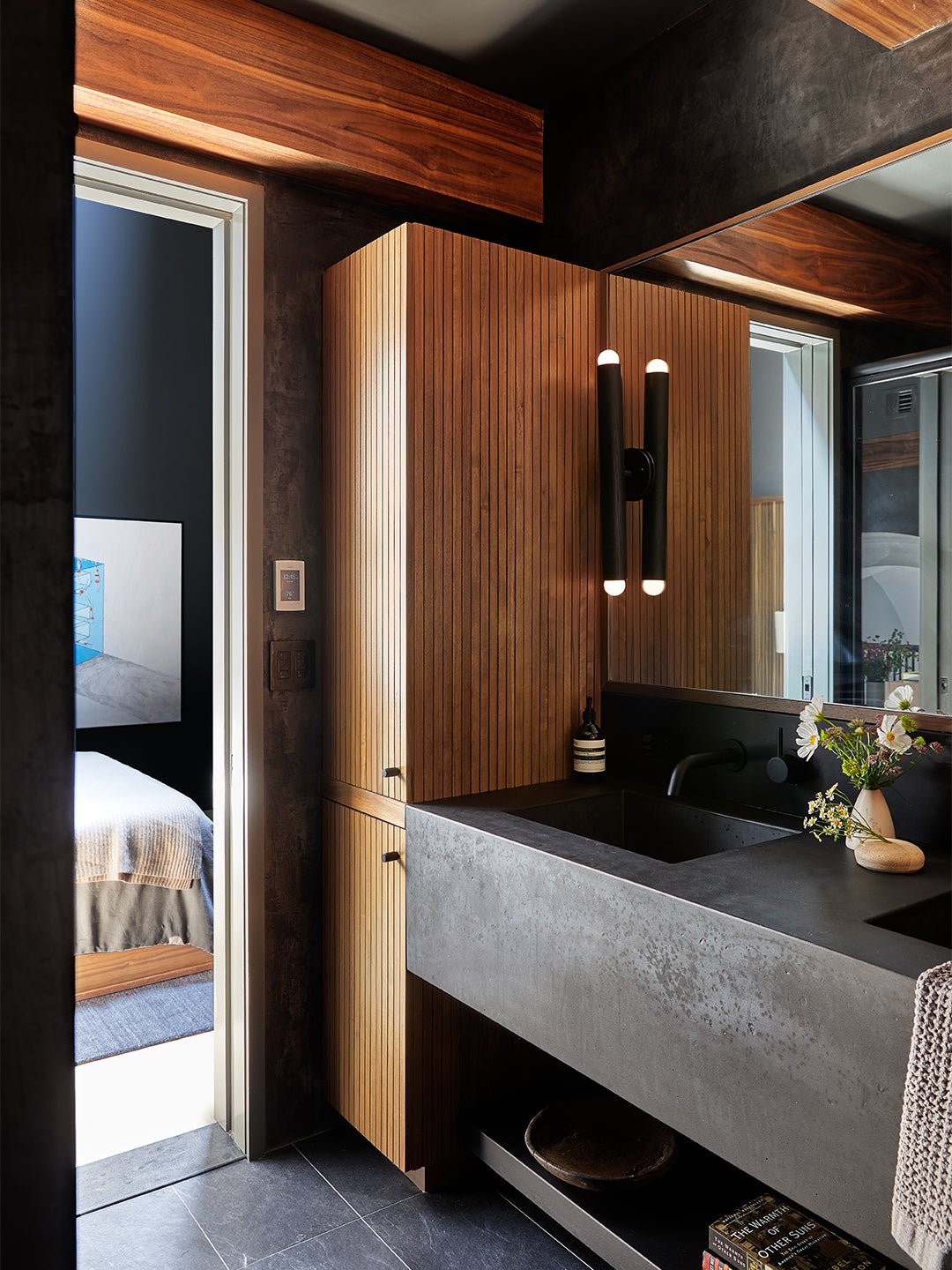 When designer Becky Shea, founder of BS/D, first stepped foot into Julia and Joe Alonzo’s Cobble Hill, Brooklyn, bedroom, her first thought was how impractical everything was. A large platform bed soaked up a ton of floor space and there were swinging doors (instead of pocket ones), so everything seemed to crash into one another. As for the bathroom, “it was something straight out of the 1980s,” recalls Shea. The only saving grace was the 25-foot-high (!) ceiling in the bedroom. (The couple’s duplex is in a converted cathedral, so it’s got architectural charm, to boot.) “Our home isn’t large in terms of square footage but the high ceilings make it feel much bigger,” notes Joe. Shea wasn’t willing to lose that (there’s also a giant skylight at the top that floods the room with light). “It definitely inspired the direction.”

After overcoming the initial challenge of tracking down a pendant light to hang over the couple’s new bed (Shea had Apparatus Studio hook up extra rods to its Arrow fixture), she got to work on improving the other details. Ahead, she brings us behind the scenes of the zen transformation.

Take the Headboard All the Way

The Alonzos’ travels to Japan in 2015 (Joe also spent a few weeks there after graduating law school) were a primary point of inspiration for the new space. “We love the minimalist aesthetic and purposeful simplicity of Japanese design,” says Julia. Shea pulled from the linear, modern lines and natural woods that define the wabi-sabi look and looked to images of hotels they had stayed in for reference. Because the bedroom isn’t as wide as it is tall, Shea wanted to create the illusion that it’s bigger by building a custom headboard out of walnut that spanned the whole length of the wall. The piece features integrated nightstands so it frees up floor space. Shea continued the fluted wood detailing on the nearby floating console. “It’s something you see pretty commonly in Japan,” she says. “It almost looks like a sculpture.”

One unique feature of the main bedroom is that it overlooks the downstairs living room. Shea revamped the ugly cable railing, opting for sleek iron balusters and a walnut cap. She also took down the old white curtains and put up motorized drapes from The Shade Store that can fully block the bedroom from view.

Paint (and Plaster) It Black

As a personal lover of black rooms (Shea’s whole upstate New York house is swathed in dark paint colors), the designer convinced the Alonzos to commit to Iron Mountain by Benjamin Moore. “It’s one of the best ways to really get a great night’s sleep because the light is absorbed,” she notes. The linen bedding and hints of wood provided enough contrast with the hue so that nothing feels overly heavy. “The whole upper floor of our home feels like a cohesive, zen retreat,” shares Julia (even the custom-built drawers in the closet are painted the same color as the walls in the bedroom).

Shea brought in the pro plasterers at Kamp Studios to zhuzh up the bathroom walls (they custom-matched the textured treatment to the bedroom wall). “It might sound scary, because there’s no natural light coming into that space, but the walnut beams, concrete vanity, and Workstead sconces illuminate the room,” she explains. “That’s how you can get away with it.”

The insides of the walnut vanity cabinets are designed to each of Julia’s and Joe’s needs and feature integrated outlets for electric toothbrushes and blow-dryers—essentials that otherwise become clutter on the countertop. The interior of the shower features an Etsy-sourced shelf that’s made specifically for holding Aesop bottles. On top: a waterproof Marshall speaker that encourages singing in the shower, because there’s a lot to feel good about now.