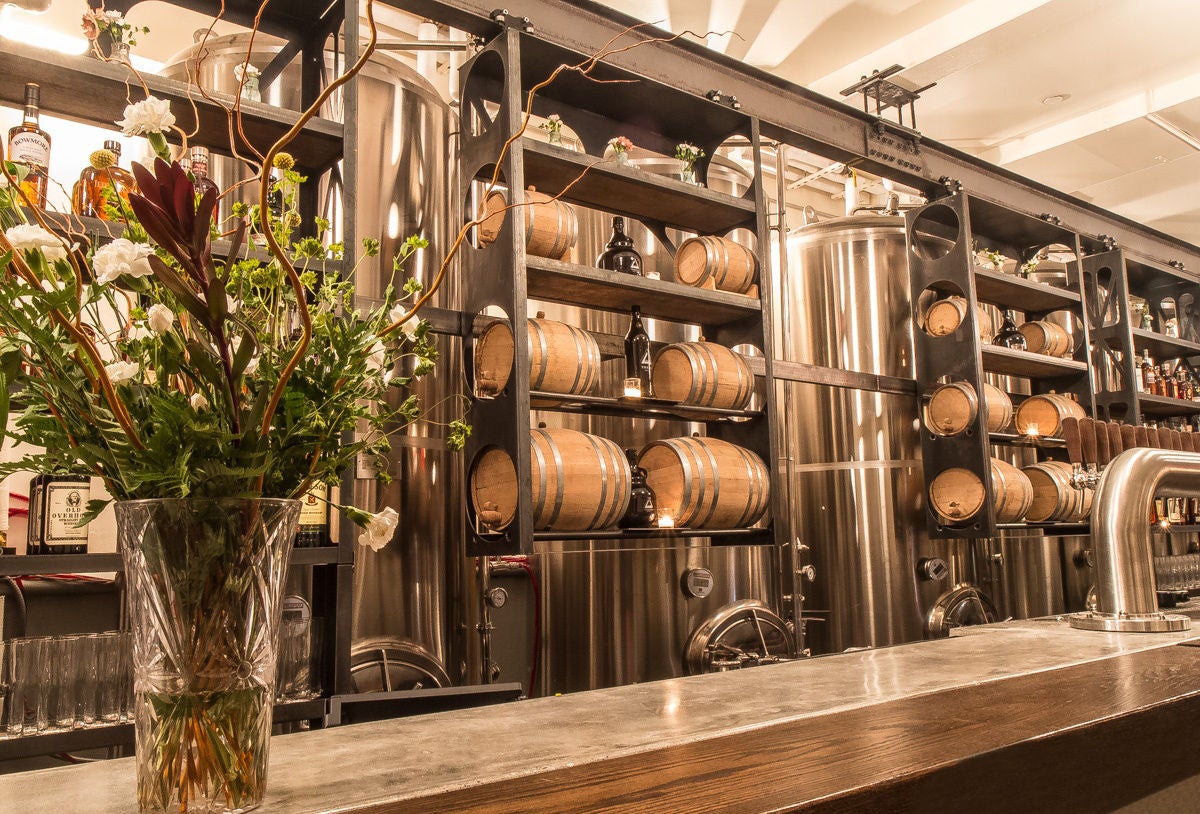 For all you beer geeks out there, check out the Big Apple’s booming craft-beer scene that ranges from homegrown breweries to European-inspired beer halls, and even a beer arcade.

This Brooklyn brewery, located in Gowanus, is not even a year old, but is quickly becoming a popular destination for beer-goers. Threes Brewing offers a selection of fresh and unique beer from Germany, Belgium, and Japan, with a menu ranging from imperial pale ales to saisons, to even a biere de miel. Their beer is served fresh from shiny steel tanks in their taproom that contains 24 draft lines, as well as the brewery has kitchen space that hosts restaurants from all over the city in residencies.

Try their Atomic Swerve, which is an earthy IPA flavored with blood orange zest and juice and fermented exclusively with Brettanomyces. This delicious beer showcases the complex layering of ingredients including: malt, hops, and yeast simultaneously.

the other half brewing co.

This Brooklyn brewery in Gowanus is a hidden gem (literally) as it is blended into a wall of graffiti. Other Half also has a very approachable aesthetic as it showcases an industrial design with a cozy atmosphere, featuring one picnic table, raw walls, and a bartop that had infamously gone on tour with the Rolling Stones. As for its craft beers, this brewery offers a selection of beer choices ranging from blondes to pale ales to stouts. In addition, the owners of Other Half are productively building relationships with local farmers to create draft beers with locally grown hops and malts.

Try Other Half’s chocolaty Indian Ladder Farmstead stout, which is a rich molasses brew made with Indian Ladder barley and locally grown hops.

WHERE tørst Danish for “thirst,” Tørst, a Scandinavian-chic beer bar, located in Greenpoint, has garnered a lot of popularity and attention recently as local and traveling beer geeks flock to this brewery for their draft selection delivered from its 21 wood-handled taps that line the entire wall behind the bar. The bar also offers a Flux Capacitor, which is a device that custom carbonates and chills each keg to excellent serving conditions. Also, if you’re a fan of Evil Twin Brewing in Manhattan, then you’re in luck because its owner, Jeppe Jarnit-Bjergsø, is one of the founders of Tørst, so about one third of its draft beers are also from Evil Twin Brewing.

In addition to their exclusively-made draft beers, try their barley wine aged in Malaga barrels.

WHERE proletariat This quaint East Village beer bar features a dimly-lit ambiance, grungy tattoo-inspired décor, an eclectic music playlist, and offers a consistent rotating selection of rare and unique brews, including unique German style beers. Head to Proletariat on a Sunday afternoon or weeknight to avoid the bustling crowd of this beer joint.

WHERE the blind tiger The Blind Tiger has been hugely popular in the craft beer scene in New York since its opening in 1995. Located on Bleeker Street in Greenwich Village, this dive-y, yet homey bar showcases a rustic design aesthetic and features 28 rotating drafts on tap, three cask ales, and over 50 bottles. Head here on a Wednesday at 6 p.m., as the Blind Tiger puts out a selection of Murray’s cheeses and baguettes for free each week.

In addition to its crafted brews, customers can pair their beers with tasty dinner options such as the chicken liver bacon paté, beer braised pulled pork, or the duck confit

WHERE spuyten duyvil This Williamsburg brewpub’s name originated from the old Dutch “spuit den duyvil” or “in spite of the devil,” which may have something to do with its lengthy beer selection of brews that are broken down regionally, including exceptional Flemish, Wallonian, and Belgian beers. The space itself features a homey atmosphere showcasing thrift shop furniture and a large table in the back that resembles a beer hall’s long tables.

Pair one of their European brews, cult American beers or a cider with their delicious cheese and meat plates.

WHERE jimmy’s no.43 Set beneath 7th St, this cozy, underground beer bar located in East Village offers a top-notch beer selection with a variety of brews from Brooklyn, Germany, and Belgium. Also, the bar’s owner, Jimmy Carbone, is largely in support of local farmers, so the bar’s drafts and bottles are uniquely made from local, artisanal ingredients. Check out this beer joint’s exciting events including its homebrewing workshops and its weekly $10 Tuesday Tastings, where customers can show off their beer knowledge.

Pair a full drafted beer with one of the bar’s Filipino dishes such as their halo halo fries topped with bonito flakes or the pork belly adobo.

WHERE hops hill This low-key craft-beer emporium in Clinton Hill features 12 constantly rotating taps, a strong cider selection, and a lengthy bottled list, including local brewers like Barrier and Singlecut, as well as Belgian producers like Hof Ten Dormaal.

Pair one of their delicious cider beers with a beef jerky snack or their popular Lox sandwich, which is made with Norwegian smoked salmon, fresh goat cheese, and topped with sliced cucumbers.

WHERE the ginger man The Ginger Man, named after the outrageous novel by J.P. Donleavy, was originally founded in 1985 in an old house in Houston, Texas, and later expanded to New York City in 1996. With over 70 beers on tap dispensing fresh ales and lagers, as well as two cask conditioned ales, this bar is always a popular spot in the city to flock for their wide selection of stellar beverages.

WHERE barcade st. mark’s Barcade, a longtime Brooklyn favorite, is a beer and arcade game mini-chain that has recently expanded to Manhattan with new locations in Chelsea, and most recently, St. Mark’s Place. Owned by four friends: Paul Kermizian, Pete Langway, and brothers, Kevin and Scott Beard, this unique craft brewery has 24 beers on tap and brings in beer fans who appreciate a microbrew as much as they do vintage games such as Asteroids.

Try their Greenport Harbor’s Goth Logger, which is a German style Schwarzbierbrewed with cocoa nibs. Pair this beer with their fish tacos or chorizo nachos.

WHERE the cannibal beer & butcher Located in Murray Hill, this sit-in beer and butcher shop boasts a spectacular 40-seat outdoor patio, a butcher counter with six seats, and a communal bar offering seven draught lines, wines, and a very curated selection of digestifs. The Cannibal also provides a wide selection of 450 beers from all over the world that are broken down by style on their user-friendly menu.The

Pair a deliciously crafted beer with one of the bar’s mouthwatering meat dishes, such as their slow-roasted half pigs head.

WHERE the pony bar Pony Bar has been a neighborhood favorite on the Upper East Side since 2009. The brewpub offers a wide selection of 20 brews on tap and two cask ales, including domestic crafted beers, which only cost $5 for a 14 oz drink.

Try their blood orange goze or a coffee IPA, and pair your crafted beer with one of the bar’s delicious sandwiches, such as their Fried Oyster and Bacon sandwich or their Chipotle-Ale Shrimp Torta.