The French already have it figured out. 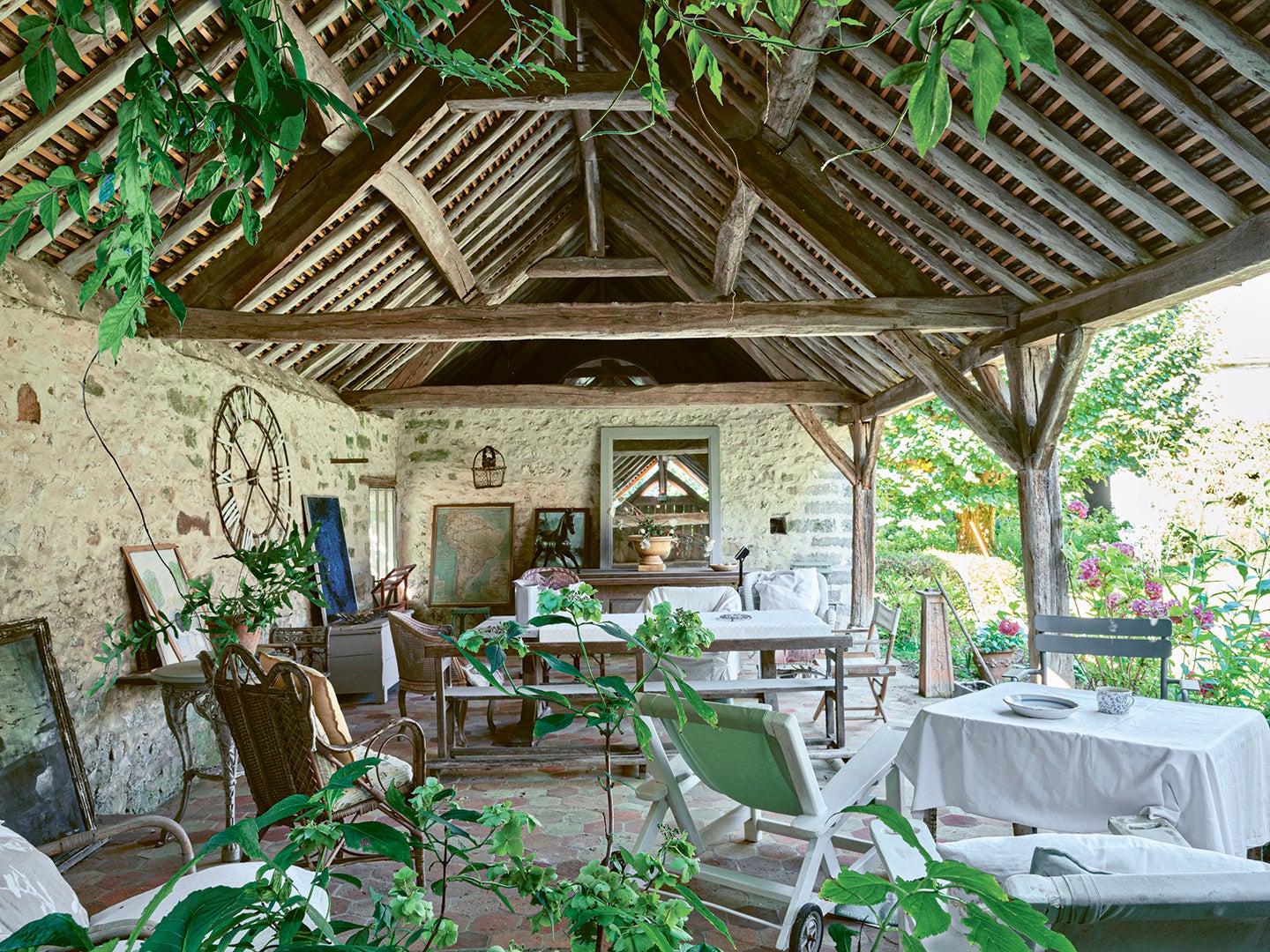 We look to the French to guide us on the latest trends—from layering mirrors to Baroque mantels for way less. So it’s no wonder they were early adopters of abandoning busy cities for the calmer countryside, long before the pandemic spurred a mass exodus in the U.S. In a new book, Coming Home to Nature: The French Art of Countryfication, authors Gesa Hansen, Estelle Marandon, and Charlotte Huguet interview a handful of transplants on why they left the City of Light—and why they haven’t looked back. In an excerpt, below, a different Charlotte (this one a lifelong Parisian) and her partner, Emiliano (from the hills of Tuscany), admit their fair share of hesitation over moving into the “near ruin” structure they now call home, about an hour outside the city. And for urbanites who haven’t taken the leap just yet, read on for eight crucial questions the authors suggest you ask yourself before you do.

It was Emiliano who, in 2013, had the idea of leaving the city and moving to the Forest of Fontainebleau. “No one wanted to move to the country back then; I had no examples around  me of people having done it successfully, and I was stressed out at the prospect of leaving Paris,” Charlotte recalls. “I was a young mother, and I was already having trouble working efficiently. I was afraid of becoming isolated and finding myself lonely, faced with a long commute.” Despite her misgivings, she joined her husband. Emiliano had grown up in the Tuscan countryside and wanted to re-create the life he’d known there. Charlotte was born in Paris, but she had chosen to marry this creative Italian to live a life of some adventure—and so she went along with his plan.

A year after they decided to take the plunge, they found themselves facing a series of challenging obstacles. The house in Barbizon was cheap, but the structure was a near-ruin. Emiliano, a cabinetmaker and craftsman, buckled down to do the renovation himself. “He worked on it as if it were a sculpture,” says Charlotte with a smile. He gutted the entire structure and demolished the former outbuildings to construct a wing. It was a huge amount of work. “We didn’t have time to ask ourselves many questions. It was a ghastly mess, and we needed to somehow keep our heads above water. We had to keep going because we certainly couldn’t go back. Little by little we started to make progress; we got a bathtub, we got a bedroom, we got a terrace,” adds Charlotte.

Today just a few traces remain to testify to this titanic effort—some exposed brick in the living room, for example, which contributes to the exceptional charm of this house that has been entirely rebuilt of wood from floor to ceiling. Charlotte believes that the difficulties at the beginning brought them closer together as a couple. Her worries about excessive commuting were groundless, although she traveled to Paris every day in the early years. “It sometimes took me two hours, but I got a lot of satisfaction from it,” says Charlotte. “If you accept it, it can be a happy interlude. You change your pace and aren’t in a hurry; you’re not always feeling that sense of urgency that society tries to impose on us; you realize that the sky isn’t going to fall in on you. Nothing’s going to go wrong; no one’s going to punish you. That’s what I’ve learned, and now I love that time on my own. It’s almost like a meditation session.”

Charlotte is convinced that living in the country has enabled her to assert herself professionally. “In the city, you can become very influenced by the emotional state of the people around you, and there are a lot of them. It can be very difficult to sort through all those thoughts that overflow onto us, creating distractions. It’s burdensome, and I find that ultimately it’s not very worthwhile. Being in the country calms things down. You can leave most of your worries behind in the city when you head back home.”

8 Questions to Ask Yourself Before Moving to the Country

What  is your  professional situation?

Do you have to be in the city frequently or even every day? Can you work independently from home? These considerations will influence your choice. If your job requires you to be in the city on a daily basis, you will certainly need to be close to a station, which will automatically have  implications for your new home. Houses will be more expensive, gardens often smaller, and the atmosphere more urban. If you’re dreaming about a remote hideaway, you’ll have to forgo a nearby train station. There will be a commute—but that was something we quickly got accustomed to.

The budget for a city apartment will often get you something large in the country, so you may envision a roomy residence. But maintaining it can easily become a full-time job when you take into consideration the housekeeping  and general upkeep that is required. Those dreary owners’ meetings will be a thing of the past, but now you’ll have to undertake a lot of work on your own and cover the cost of it all. You’ll need to carefully budget for numerous expenses and be prepared for the unexpected.

How much gardening are you up for?

A large property will obviously require a lot of work, even if you don’t intend to plant massive flowerbeds. You’ll have to mow the lawn, prune the trees and hedges, water, and rake up dead leaves in the fall. That’s several hours a week, which may be pretty exhausting if you don’t have the wherewithal to get help from a gardener.

Can you face driving a car every day?

It’s difficult to get by in the country without a car. Depending on how remote your property is, it’s unlikely you’ll be able to do everything by bike as you might have done in the city, unless you have a lot of free time (and energy!). If there are two of you, with or without a family, it may even be necessary to buy a second car. And if you don’t yet have a license, you’ll need to get one or you’ll be practically confined to the house.

Is it better to restore a house or find one that’s in move-in condition?

A wreck or a fixer-upper is usually less expensive, and the notion of renovation to suit your personal taste may be tempting. But it’s a long and ofter rugged road. Finding skilled workers can be a challenge, and the job frequently incurs cost overruns. We would recommend a fixer-upper to those who are artisans themselves, or else keen do-it-yourselfers, architects, and those with enough experience to know whom to trust. When you buy a house ready to move into, you will have to come to terms with the former owner’s taste and perhaps a kitchen or bathroom still in its original state. Basically, the house of your dreams doesn’t yet exist, so you’ll have to fashion yours bit by bit with a sense of humility, recognizing its constraints. You need to ask yourself the following question: Am I ready to launch into major work, with all the inconvenience that can entail, or am I willing to live in an imperfect house that will be transformed gradually?

Remote location or close to a large town?

Country life does not necessarily imply isolation. Living an hour from a town or city is not the same as living in the middle of nowhere. If you are looking for tranquility, lower prices, and the wilder side of nature, then a more remote location will suit you. Depending on your age and health, the proximity of medical care may be an issue, as will access to schools and sports activities for families with children.

Living in a country house does not mean you’ll always be at peace. You have to figure out neighbors, barking dogs, lawn mowers, and cars, as well as planes flying overhead. Decibels are at a lower level than in the city, but if you long for silence, you’ll have to find a house that’s really isolated and accept the fact that the chores of daily life will require a bit more organization. A piece of advice: Invest in your neighborly relationships and you’ll be well repaid. Give a housewarming party when you arrive to meet everyone and create a friendly atmosphere.

How can you prepare children for the move?

Children often have a horror of moving, especially beyond the age of about 6. There’s not much you can do about that. But by offering plenty of reassurance, while at the same time making it clear that your decision has been made, you will help your children to make the transition. Inviting back friends from their new school will also help them be accepted more quickly. Whatever the situation, allow time for the adjustment and don’t expect it overnight.

Coming Home to Nature: The French Art of Countryfication ($30)
Shop