5 Things No One Tells You About Planning a Destination Wedding

Toss out the rulebook. 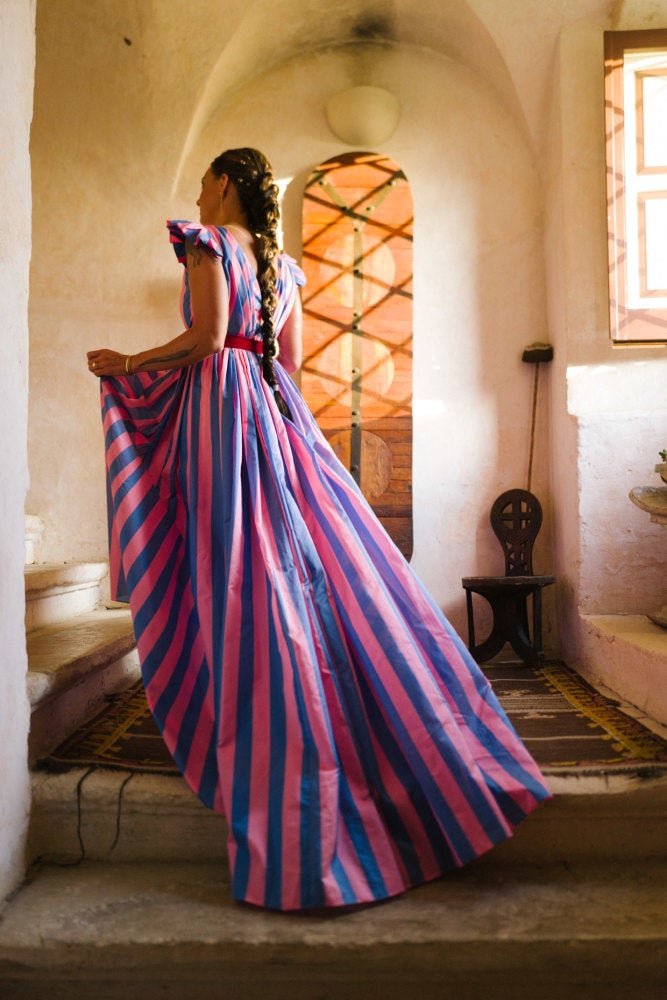 Caitlin Mociun might be known for her beautifully crafted engagement rings, but abiding by tradition isn’t necessarily in her repertoire. Choosing creativity over convention, the jewelry designer’s dreamy Italian wedding to creative director and co-founder of Bower Studios, Tammer Hijazi, this summer was a liberating celebration of love, people, and place.

“I didn’t try to turn the location into something that it wasn’t,” says Mociun of tying the knot at Il Convento di Santa Maria di Costantinopoli—a convent-turned–boutique hotel in Puglia. “I picked Il Convento because of what it is. I had very little drama because of that.”

Having traveled through Italy the summer before Hijazi proposed, the pair quickly landed on the idea of hosting the four-day celebration at Il Convento. Athena McAlpine, the hotel’s proprietor, would oversee most of the logistics leading up to the big day.

“I wasn’t even convinced I wanted a wedding at all, but if we were going to do it, I wanted to keep it small, which is partly why I wanted a destination wedding,” says Mociun. “We thought to ourselves, [this] would be a rad place to get married, not knowing if she ever did weddings.”

The prospect of turning your wedding day into a foreign adventure is alluring. That is until the stress of finding vendors, coordinating guests, and navigating language barriers settles in. By following their gut and forgoing the rulebook, Mociun and Hijazi were able to avoid the most common pain points of planning a destination wedding.

No matter how far-flung or, well, just far, your venue of choice, there are plenty of factors to consider before planning a destination wedding. Ahead, Mociun shares her dos and don’ts for an effortless “I do” abroad.

Having developed a shared understanding of the food and decor, Mociun was able to rely on McAlpine for the day-of logistics. Centering the look and feel of the wedding on the hotel’s eclectic aesthetic made party planning a breeze—even from 4,000 miles away.

“Athena was my de facto planner,” says Mociun. “We emailed quite a bit and had a couple of phone calls, but most of the planning happened in person when I visited Il Convento for four days in May, about four months before the wedding.”

During that trip, the pair got to know each other and nailed down the bigger details. “I developed total trust in her. I love her aesthetic, so I was like, ‘Do whatever you want.’”

While location and venue are certainly the most important factors, don’t forget about the people. Unless you’re planning on having a 24-7 wedding coordinator stationed on-site in the months leading up to the big day, you’ll want to know that you can trust the vendors and contacts you’ve placed in charge.

While Mociun has very few regrets about her wedding day, there is one thing she’d do differently: “I wish we had spent more time in the area before or after the wedding, relaxing,” she suggests.

With the wedding set for Friday, the couple and their first wave of guests arrived on Tuesday—leaving just three or so days to sneak in all their pre-wedding plans. “We didn’t have that much time to go into town or go to the beach because we were so busy catching up with and entertaining different groups of family and friends.”

Do: Select a venue that matches your style

Il Convento houses a diverse and colorful collection of art, objects, and textiles. Quirky figurines and bold ceramics set the stage for an equally vibrant wedding day. Other than a few added touches the hotel provided that day, like African fabric for the tables, garlands of Diwali marigold, and local sunflowers, the hotel and its surrounding gardens doubled as an idyllic backdrop on its own.

“Pick a venue that you like everything about,” suggests Mociun. “Going somewhere far (especially a foreign country) and then trying to get them to create a vision that’s not already there is going to be difficult. If you don’t like it, don’t have your wedding there. You need to like the way it looks already and the food they have there or you’ll run into logistical issues.”

Do: Leave room in your suitcase for meaningful details

While Mociun loved the idea of tying the knot somewhere far away, she wasn’t about to leave her personality at home. To help loosen guests up after a long day of travel, the couple provided everyone in attendance with monogrammed beach towels and wigs to wear during the welcome dinner. Mociun also made her jewelry for herself, Hijazi, as well as their parents, the friend who officiated, and McAlpine.

Don’t: Rely on a local DJ

That is, if you’re extra particular about your music. The same goes for hair and makeup. If there’s something that you feel nitpicky about, don’t leave it up to luck.

“If you can afford it, bring someone you trust instead of finding someone local. Tammer is particular about music, so we brought a DJ we really like. I learned to do my makeup myself, so I didn’t have to worry about finding someone local and trying to communicate what I wanted, hoping they understood,” explains Mociun.

A version of this story by Crystal Meers originally appeared in the Winter 2018 issue of Domino, titled “That’s Amore.” Subscribe to be the first to receive each issue!

The Cool Girl’s Guide to a City Hall Wedding